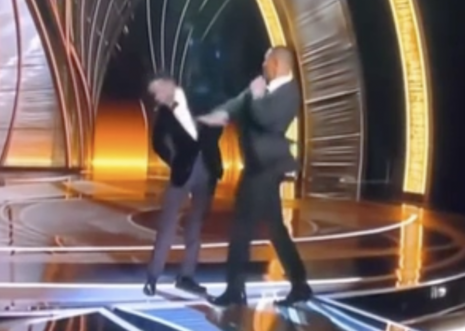 The 2022 Academy Awards really wanted to boost their ratings this year. The typical dose of wokeness infused in the star studded event was curtailed to a few brief thank you speeches and hostesses. But there were a few moments during the night that were worth discussing.

Ukraine on the Brain

Of course there would be references to the conflict happening in the Ukraine. From the title screens, to the pins and ribbons, to the moment of silence during the program. But host Amy Schumer wanted us to really know how much she cares about the Ukraine guys. At the end of the night, Amy Schumer felt it was an appropriate time to announce that there is a genocide in the Ukraine and that women and trans people were losing their rights. It was such a forced virtual signal as Schumer slipped up.

“And there’s a genocide going on in the Ukraine," Schumer said, beginning her virtue signal. "And Women losing all their rights. And now please welcome last year’s winner. And Trans people.”

It seems we can add attention to the list of things Amy Schumer likes to steal.

The bulk of the wokeness of the evening came from Wanda Sykes. She was given all the political jabs, but they all seemed to come from left field. Earlier in the evening, Sykes took a swing at Sen. Mitch McConnell (R-Ky.), but she then finished the intro by letting the people of Florida know they would be having a gay night. Get it? Because you aren't allowed to say gay (even though the Florida bill everyone is referring to never says you can't say gay and the name is misplaced clickbait).

Towards the end of the night, Sykes joined Regina Hall in giving out consolation prizes. Sykes provides a shredded up ballot to an Oscar attendant after asking them if they liked Democracy. Sykes should get tested for COVID because her lack of taste in humor was apparent.

This wasn’t a woke moment, but it definitely started sending shockwaves across social media. Comedian Chris Rock made a joke about Jada Pinkett-Smith’s shaved head, claiming he couldn’t wait to see "G.I Jane 2," and was met by husband Will Smith walking up on the stage and slapping Rock across the face.

Afterwards, Smith won his first Oscar for best actor in “King Richard” crying in his acceptance speech and apologizing to The Academy, not Chris Rock, for his behavior. Smith then referred to him as “acting like the crazy dad”. This was a strange situation but the most entertaining aspect of The Oscars this year.

If this happened every year, I’m pretty sure more people would tune into award shows.

Overall, the Oscars wasn't as excessively woke as it was last year. It seems concerns of declining ratings really did encourage a more streamlined show with little opportunity to virtue signal. Hopefully the show continues to keep the wokeness at a minimum.