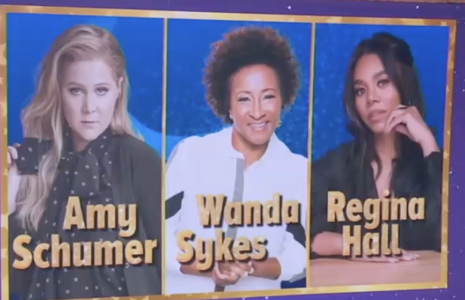 Hollywood insiders are trying too hard to tell us how great this year’s hosts of the 94th Academy Awards will be. Three women, who are also alleged comedians, have been chosen – Amy Schumer, Wanda Sykes, and Regina Hall. Is this the best the Oscars can do in 2022? The announcement was made this morning on Good Morning America.

Producer Will Packer called the decision to choose a trio of women as a history-making one. It will be the first time three women have hosted the ceremony. Three hosts have not been used in 35 years. With the dismal ratings recorded in recent years, it is likely that an all-hands-on-deck strategy is in place. Color me skeptical that this trio will deliver a bump in ratings.

“This year’s show is all about uniting movie lovers.  It’s apropos that we’ve lined up three of the most dynamic, hilarious women with very different comedic styles,” said Packer.  “I know the fun Regina, Amy and Wanda will be having will translate to our audience as well.  Many surprises in store!  Expect the unexpected!”

Amy Schumer questioned if this is a good idea.

“I’m not sure who thought this was a good idea but I am hosting the Oscars, along with my good friend Wanda Sykes and Regina Hall," Schumer said. "I better go watch some movies.”

Last year, the emphasis was on Black Lives Matter (BLM). In 2020, it was the LGBTQ agenda and animal rights. This year looks to be a nod to women. All the boxes are being checked with this year’s choices.

Regina Hall is probably the least well-known. She is the first African-American to win the New York Film Critics Circle Award for Best Actress in 2018 for Support the Girls.  Amy Schumer is outspoken about gun control and known for political rants, including anti-Trump rants which have led to audiences getting up and leaving her performances. Wanda Sykes is a lesbian LGBTQ activist and once “joked” at the 2009 White House Press Correspondents’ dinner that she hoped late conservative radio legend Rush Limbaugh’s kidneys failed. Ugh.

Will this line-up of woke women bring the audience back? The Oscars will air on ABC from Los Angeles’ Dolby Theatre on March 27.