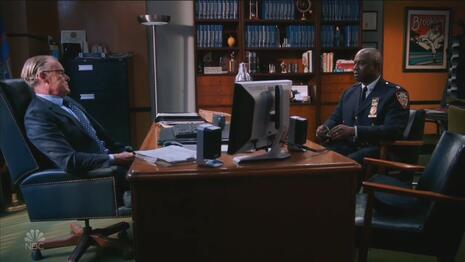 The episode, 'Blue Flu,' on Thursday, August 19, begins with a news report of a police officer being given a bad food order with a dead mouse in it at a local burrito joint.

"This was an act of political violence organized by a group of radical anti-cop Antifa anarchists working out of The Burrito Haven," Frank O'Sullivan (John C. McGinley), the president of the Patrolman's Union, announces on the screen.

But, of course, Brooklyn Nine-Nine's sharp police captain, Raymond Holt (Andre Braugher), soon figures out that this story could not possibly be true. O'Sullivan is falsely making cops appear under attack by groups like Antifa. (Gee, Antifa never attacks cops. Who would think that an "idea" could ever do such a thing?)

"This is bogus. The officer called in a to-go order under the name Tom. The restaurant had no idea he was a cop when they made the food or packed the bag. So, clearly, he wasn't targeted for 'Being a police officer,'" Captain Holt tells his precinct detectives.

In protest over the burrito incident, police officers call out sick en masse at Brooklyn Nine-Nine, a "blue flu."

Holt hires Rosa Diaz (Stephanie Beatriz) as a private investigator who learns that the cop claiming to have been given a bad burrito bought a mouse at a local pet store shortly before the incident. Other detectives discover that officers who called in sick during the blue flu used faked illness results acquired from an officer's brother who works in a lab. Once again, police officers are portrayed as corrupt and dishonest.

Unfortunately for Captain Holt, one of his trusted detectives investigating the blue flu con was really sick when he was hanging out undercover with the cops. He gets all the lying officers genuinely ill as a result.

But Captain Holt finds a solution to one-up the dishonest O'Sullivan. It turns out that having so few police officers out there patrolling the streets has really been great for the city.

O'Sullivan: So I gather you're ready to cave to my demands.

Holt: Why would I do that?

O'Sullivan: Give me a break. Your arrests are way down, and your compstat numbers are terrible.

Holt: Well, not those numbers. Obviously, they make it look like we haven't done much at all this week. But a friend of mine told me something unintentionally interesting-- focus on what you didn't do. So here's what we didn't do this week. With fewer officers at our disposal and none of them trying to hit compstat numbers, we made fewer bad arrests. Number of complaints against officers, down 32%. Number of cases thrown out at arraignment for insufficient evidence, down 34%. And here's the most important thing we didn't do. We didn't make the community less safe. Rates of major and violent crime, what actually matters, stayed the same.

O'Sullivan: What are you saying?

Holt: I'm saying the nine-nine just became a case study for how a police force can work better with fewer police.

O'Sullivan: Are you actually talking about laying off cops?

Holt: If these numbers persist, I may have no choice.

Holt: Great. That's what I want.

O'Sullivan: Then I won't end the Blue Flu.

O'Sullivan: You just said that-- This is a very frustrating conversation.

The problem with the fantasy of this scene, of course, is that this year has seen plenty of "case studies" of trying to make police forces work with fewer cops and the results have been disastrous. Cities that defunded police have seen skyrocketing crime rates, particularly a sharp rise in homicides. New York City, where Brooklyn Nine-Nine is set, has been one of the hard-hit cities.

What is even more infuriating about the episode is how it tries to downplay the reality that police officers are being targeted by hate. When Captain Holt shows O'Sullivan video of the cop leaving the pet store, O'Sullivan complains, "My guys are under attack." Captain Holt responds, "No, I just proved that it wasn't an attack."

Is the audience really supposed to pretend that police officers are not under attack nowadays and that the fake mouse burrito was all they need to worry about? Last month, the National Fraternal Order of Police found that ambush attacks on law enforcement officers nationwide are up 91% compared to 2020.

But Brooklyn Nine-Nine instead does an episode on a hoax "attack" that makes police officers look like lying con artists trying to evoke fake sympathy. To add insult to injury, the episode then shills for the already discredited defund the police movement. Network television is shameless.

This rant was brought to viewers in part by Align Probiotic, Verizon and Lowe's. You can fight back by letting these advertisers know what you think of them sponsoring such content.