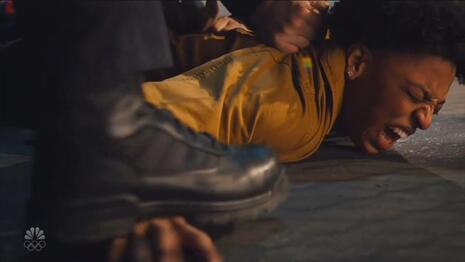 The episode, "An Inferior Product," on Thursday, May 15, began in a musical instrument store. The television set on the clerk's desk is showing scenes from Black Lives Matter protests in the city. A young black man is dropping off his guitar for repairs.

As the innocent guitar player later walks out the door of the store, a group of men run past him. Police officers see him and think he was with the group that ran past. They throw him to the ground. Then in a moment of sadistic cruelty, an officer uses his boot to break the bones in the young unarmed man's hand.

Police Officers: [Both grunt] Stay down!

Black man: They ran up the block!

Police Officer: I said stay down! Stay down!

It turns out the young man is the nephew of the lesbian "wife" of Ayanna Bell (Danielle Moné Truitt), a commanding officer in New York City's Organized Crime unit. We learn that the cruel cop crushed every bone in his hand and he is likely to have nerve damage.

This scene is typical of network television which relentlessly pushes the BLM narrative of evil cops killing and injuring innocent black men. The way television has portrayed cops in recent years, you would think American police officers were Soviet-era NKVD troops, but targeting black people instead of kulaks. This is ironic considering that BLM is actually run by Mao-admiring Marxists who love to terrorize innocents.

Law and Order: Organized Crime is not the only series in the Law and Order franchise to portray cops as racist villains this season. It is part of a nasty Hollywood pattern.

I cannot imagine how hard it must be for police officers throughout the country to turn on the television and regularly see the boys in blue portrayed as the enemy by a pampered Hollywood elite that can afford private security.

This rant was brought to viewers in part by Kohl's, Dove, and Allstate. You can fight back by letting these advertisers know what you think of them sponsoring such content. and Order: Organized Crime