CBS's SWAT Starts Questioning Anti-Cop Culture: 'How Do You Cancel the Police?'

Could common sense actually be returning to network television cop shows? Are some Hollywood scriptwriters waking-up to the insanity of the left's radical anti-police activism?

CBS's normally BLM-friendly cop drama S.W.A.T called out the anti-police crowd's woke hypocrisy and unfairness in this week's episode, 'Sins of the Father,' on April 7. In the episode, quintessential good guy Sgt. Deacon Kay (Jay Harrington) was excited about his son's school career day. Deacon planned to speak to the kids about his work as a police officer. Then he got a call from his son's teacher telling him the parents do not want a cop presenting to their kids.

Deacon: Wait, hold-hold on, hold on. What does that even mean? I thought the teacher was in charge of the class, not some parent posse. I am proud of my badge. Let me ask you something-- does that make me too toxic to attend the science fair next month? Okay. Well, good. I'll see you then.

Deacon: Yeah. That was, uh, that was Matthew's teacher. I just got fired from his career day tomorrow.

Deacon: Yeah. Apparently, some of the parents think that a cop is the wrong kind of guest to have in a class these days.

Deacon: What am I supposed to tell Matthew? He's got no context. We don't let our kids watch the news.

Deacon: So now I'm some urban war criminal... to this smug young teacher who's-who's hiding behind these parents.

Hondo: They don't know you, Deacon.

Deacon: That's the thing. They do. I've known most of them since Matthew was in kindergarten. (Exhales) I can't believe it has gotten this bad.

Hondo: Deac, this ain't nothing new. It's just loud now. And public.

Deacon: You know, I think about officers like Grayson, Erika, shot in the line of duty.

Hondo: And you don't like being stereotyped as a thug. Well, you know what? Nobody does.

Deacon: You became a police officer for the same reason I did: To protect and to serve. Mm-hmm. We protect the city. We are not the problem.

Hondo: So who is the problem?

Deacon: People who break the law.

Hondo: And what about when cops break the law?

Deacon: Then they should be prosecuted. It doesn't make the rest of us criminals.

Hondo: Same's true on both sides of the line.

All season, Hondo (Shemar Moore) has been the character most likely to argue in favor of BLM talking points and his mention of "both sides of the line" continues in that vein. However, even his general sympathy to BLM cannot hide the unfairness of the "parent posse" aligned against a good cop like Deacon.

The show really brings that point home at the end of the episode when Deacon is chatting with a new S.W.A.T. officer named Durham (Adam Aalderks). 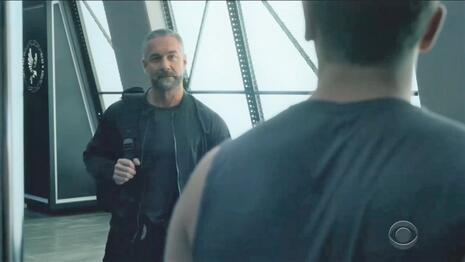 Deacon: Turns out I won't be doing the demo. Some other parents don't want a cop in the classroom. We used to be the good guys.

Durham: Yeah, before cancel culture took over. How do you cancel the police?

Deacon: I know these parents. Shadow in the driveway, they are speed-dialing 911 for help.

So while a show like S.W.A.T. has too often pushed BLM propaganda to placate the woke Hollywood powers that be, they deserve credit for sneaking in certain truths this time around.