CBS's S.W.A.T. Claims No Progress Since '92: 'Gap Between Black and Blue Is Even Wider' 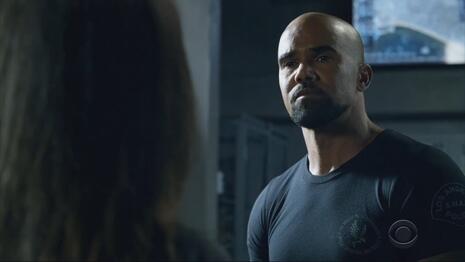 In the season premiere, Hondo's father (Obba Babatundé) declared, "[i]t's the cops. Y'all are the ones that's killing us," and insisted Los Angeles policing of black communities has not improved since 1965. In a later episode, Hondo lamented that "some things can be solved without a gun," implying police are trigger-happy.

This week's episode, 'Fractured,' on December 9, returned to the "nothing's changed" narrative of the premiere after Hondo's boss, Lieutenant Lynch (Amy Farrington), asked him if he would take part in an LAPD marketing campaign to recruit a new generation of black officers. Hondo understandably rejects being used as a mere public relations tool, but takes his criticism further after another black S.W.A.T. officer, Erika (Lyndie Greenwood), asks him why he does not want to do the campaign.

Erika: Why'd you say no?

Hondo: (Takes deep breath) Honestly? Because I'm exhausted. Where were you in '92 when things popped off?

Erika: Um, we were still living in Houston. I'd just turned six. Hmm. I remember my parents were glued to the TV that whole week.

Hondo: Well, I was right here in South L.A. And I didn't have to turn on my TV, 'cause I could watch it all from my backyard. And this summer it was like I was watching a rerun. Watts and Rodney King, and now George Floyd, Ahmaud Arbery, Breonna Taylor. It's the same old show, and it doesn't stop. And the gap between black and blue is even wider now. Erika, I turned down Lynch because I don't know how I can look a lack kid in the eye and tell them they can make things change by joining the LAPD. Because it's not true.

Hondo's dialogue was problematic in a host of ways. First of all, it merged very different cases as though they were all the "same old show." The Breonna Taylor case, in which Taylor was shot during a narcotics raid after her boyfriend shot at officers, is not the same story as Ahmaud Arbery, whose death did not even involve law enforcement.

His speech once again pushed the lie that the LAPD has never made successful changes in its policing practices when even left-wing legacy media has long praised Los Angeles as a model of reform. And lastly, it regurgitated the BLM propaganda that somehow "black and blue" are enemies. In fact, a Gallup poll conducted this year found a majority of black Americans do not want less police presence in their area. Many want even more.

Soon police will not even be able to do their job in Los Angeles. L.A.'s new left-wing District Attorney, George Gascon, announced he will no longer prosecute a long list of crimes including resisting arrest, criminal threats, drug possession, public intoxication, prostitution, and numerous other crimes. With a list like that, all citizens of Los Angeles will soon be wishing the anti-police, pro-crime movement that is taking over major U.S. cities had never existed. One wonders how Hollywood writers for shows like S.W.A.T. will even be able set a police show in L.A. at all.

Conservatives Fight Back: This show was sponsored in part by Ford, Geico, and Walmart - let them know what you think of their sponsorship of such divisive content.