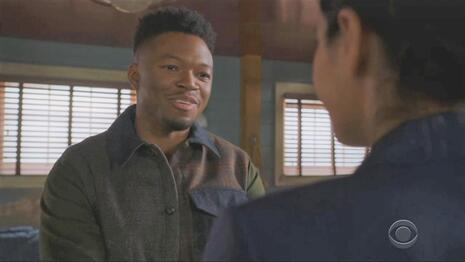 But no matter how much violence they cause, legacy media and Hollywood will attempt to gaslight the public into believing BLM protests are "mostly peaceful" and merely focused on racial equality and "social justice."

Newsbusters has chronicled all fall and winter the endless parade of BLM propaganda put out by the television networks. This week's latest installment of gaslighting comes from NCIS: Los Angeles.

In the episode, 'The Frogman's Daughter,' on February 14, Kam (Kayla Smith), the daughter of NCIS agent Sam (LL Cool J) is kidnapped by two disgruntled ex-LA cops previously fired from the force. It turns out Kam has been secretly helping to organize anti-police protests without her dad's knowledge.

Before NCIS discovers Kam's kidnapping, though, the Department of Homeland Security shows up concerned about planned protests in the city that night. A DHS agent jokingly named Megan Merkle (Tiffany Smith) introduces herself to Agent Devin Roundtree (Caleb Castille). When she mentions DHS is concerned with possible violence at the planned protest, Agent Roundtree takes offense at the idea that the protesters could possibly become dangerous.

Agent Roundtree: Uh, how can I help you?

Agent Roundtree: Assist them with what? Directing traffic? It's gonna be a peaceful protest.

Agent Roundtree: No, it's realistic. The-the protest is about equality and racial justice. But I'm sure the protesters would love our protection.

Agent Merkel: Well, this request comes directly from my director, and the Secretary of Defense, Secretary of the Navy, the director of NCIS.

Agent Merkel: There are concerns about armed counterprotesters showing up tonight.

Agent Roundtree: So, to be clear, it's not about the protesters, it's about people showing up who could pose a threat to what would be a peaceful protest.

Agent Merkel: Sure. If you want to get technical.

Agent Merkel: (Laughs softly) I feel like we're getting off on the wrong foot.

Agent Merkel: Agent Roundtree, can NCIS help us gather intelligence about militia groups who may pose a problem tonight?

Agent Roundtree: Sure. If you want to get technical.

Ahh...so it is just the fear of the counter-protesters. That is the big threat. The protests themselves could not possibly be a source of concern, right? Television shows this year just have characters keep saying over and over again that the protests are peaceful, really, really peaceful. Did they ever hear of Shakespeare's warning, "I think thou doth protest too much"? If protests were genuinely peaceful, Hollywood writers would not have to keep telling audiences that.

In the episode, it turns out that there was one activist with Kam who wanted protesters to start getting violent because he did not think peaceful protesting was working. Agent Merkle also mentions that her agency caught a protester in Seattle carrying explosives, but these individuals are portrayed as outliers and not indicative of a broader pattern.

But BLM protests were routinely violent across the country. And protesters were not merely agitating for "racial justice." They sought to defund and abolish the police, leading to the "largest percentage increase in homicides in American history," according to the Wall Street Journal. Now cities like Minneapolis that defunded their police force are backtracking and putting millions of dollars into trying to hire police again because the crime wave there has so thoroughly ruined their city.

BLM and Antifa protests have been a poisonous exercise in domestic terrorism and no amount of Hollywood lying should ever cause Americans to forget it.