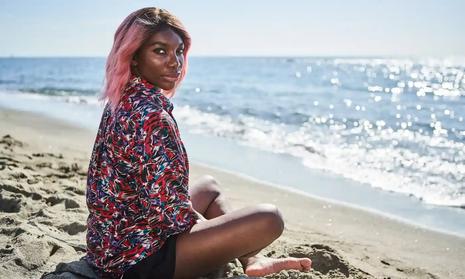 Ladies and gentleman, prepare for a new feminist-invented problem: "hemophobia" in regards to sex. What is that, you ask? Well, according to feminists who are pushing for the "normalization" of "period sex" in entertainment, it is "being wary about witnessing period blood."

But don't worry, Hollywood is going to cure unwoke plebians of this hemophobia by putting it on television shows. Lucky us.

Last year, Showtime displayed period blood in a lesbian sex scene during the premiere of the reboot The L Word: Generation Q. HBO has now upped the ante with their new series I May Destroy You.

In the episode, "Don't Forget the Sea," on June 22, lead character Arabella (Micheala Coel) was about to have sex with Blagio (Marouane Zotti). Since Arabella was menstruating, Blagio pulled out her blood-soaked tampon. He then found a blood clot on the bed and played with it. Yes, they seriously showed this.

Feminists are ecstatic about the scene. Promoting period sex is weirdly important to feminists. Why, you ask? An article in the U.K. magazine Grazia sums up the primary reason:

“A survey last year by intimate health brand Intima found that women lose six years worth of sex throughout their lives by avoiding period sex. Read like that, it seems we need to do whatever we can to get over the stigma of period sex – whether it’s programmes like I May Destroy You normalising it, or education.”

Apparently, if there exists any reason a couple may want to abstain from having sex, then feminists say the "stigma" must be broken. Feminists decide what feelings men and women are allowed to have about when they most enjoy sex. Got it?

Prepare to see more scenes like the one in I May Destroy You in future television series. With the left, once a taboo is broken, they will continue to push the boundaries as far as they can.

In the meanwhile, skip the series I May Destroy You altogether. It is a lousy, nihilistic show with little redeeming value. anyway.