Showtime's 'L Word' Reboot: A Throuple Is 'A Family' 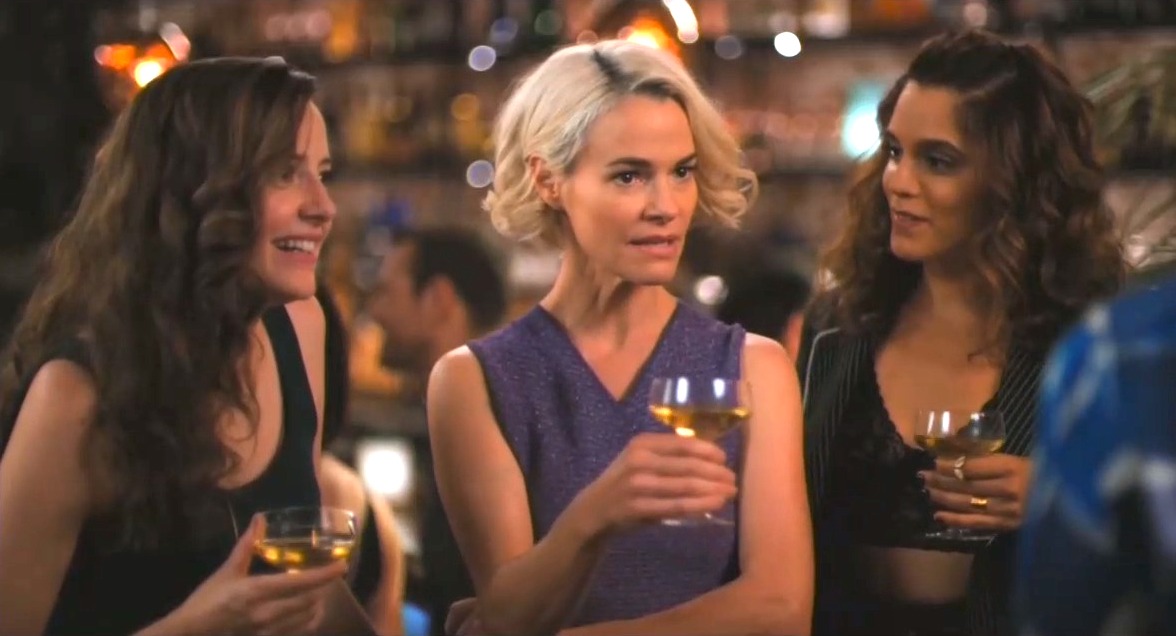 Polyamory is the next frontier in the radical left’s sexual revolution. Every left-wing medium, from the New York Times to network television, has been attempting to “normalize” and desensitize the public to this "lifestyle." It was only a matter of time before Showtime's The L Word: Generation Q, a show dreamed up in a lesbian fantasyland somewhere in Los Angeles, would join the polyamory push.

In this week’s episode, “LA Times,” on December 29, talk-show host Alice (Leisha Hailey) created a “throuple” with her current lesbian lover Natalie (Stephanie Allynne) and Natalie’s ex-wife Gigi (Sepideh Moafi). Of course, Gigi and Natalie were already raising two children together. What could go wrong for children to live under such sexual chaos?

Before the explicit scene that establishes the threesome’s new “relationship,” the trio are already talking about themselves as a “family.” They first use the word “family” after friends show Alice a recent feature article and headline promoting her as the “Queen of Queer Life.”

Natalie: And things are going great with Gigi.

Alice: Right, like, Gigi's their other mom. She's a big part of the family now.

Gigi: Are you guys talking about me?

Alice: Yes. Stay, stay, stay. We were just talking about how we're, you know, nailin' it.

Gigi: What are we nailin'?

Gigi: If you say so. Cheers.

Shane: Good. You should.

Bette: Well, we have a little surprise for you.

Alice: But it's not my birthday.

Shane: I know that.

Alice: Yeah, give it up.

Alice: Shut the fuck up! How did you get this so fast?

Bette: I have my sources.

Shane: What are you talking about? It's the Church of Latter Day Saints. It's amazing.

Natalie: Or a cult in Portland.

Alice: "Alice Pieszecki with her family."

Natalie: We are a family

As the gay “marriage” motto said, “Love Makes A Family.” The left lied when they said they only wanted “gay marriage” so that same-sex couples could have the same rights as a married man and woman. The Supreme Court’s Obergefell decision legalizing homosexual marriage was a bridge to breaking down marriage as an institution and “smashing heteronormativity.”  Before the ink had dried, Hollywood and left-wing media began to promote more than two sexual partners as a “family.” If the left ever gets control of the Supreme Court again, it is only a matter of time before this next “barrier” is brought down.

During this episode, Alice also had a conservative candidate for Los Angeles mayor come on her show. He is one of the “villains’’ of L Word: Generation Q. He is an awkward, straight, white man. He squirms and hedges when Alice asks him if he is “a feminist.” It is supposed to be a hard-hitting moment, but leftists have yet to figure out that contemporary feminism has become a joke in the era of pussy hats and clitoral costumes.

There is one genuinely (and unintentionally) funny moment in the episode. Drunken personal assistant Finely (Jacqueline Toboni) goes to visit her “priest" lesbian lover, Rebecca, who leads the “Multicultural Community Church.” She tells Rebecca, “Okay, so, remember this morning when you were wondering if I could get over the whole priest thing? Yeah. Well, I can, because you're not a real priest. You know, you have the church and, like, the outfits, but you're not-- it's not a real church, so I can totally do it.” It is a rare honest moment in a show brimming with leftist fallacies.

Leftists can pretend “throuples” are a “family” just like Rebecca (Olivia Thirlby) can pretend to be a Christian “priest.” But, to paraphrase the movie The Princess Bride, those words do not mean what they think they mean.