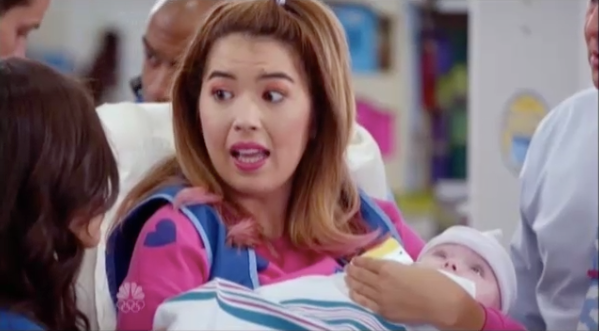 In this week's episode of Wal-Mart, I mean Superstore, we get to one of the issues we've all anticipated since the show's premiere: labor unions. As Cheyenne (Nichole Bloom) goes into labor at work, the chaos is comical but the dialogue is obviously meant to persuade the viewer that it's the store's responsibility to take care of the 17-year-old pregnant girl. Almost makes you think that having Cheyenne as a pregnant character was all about making political statements (i.e. abortion) and now paid maternity leave.

Jonah lectures the other employees, "This is ridiculous. She shouldn't have to kill herself to have a baby. Did you guys know that in every other first-world nation, paid maternity leave is just automatic?"

And how will the employees force the company to pay? By starting a union, of course!

This is how the left always works. Create problems, build sympathy, then propose a solution. Who wouldn't want Cheyenne and the baby taken care of? The evil Wal-... sorry, Cloud 9 executives who make too much money and don't care about their employees. That's who!

Wal-Mart is the largest employer in the universe. Over a million people collect a check from wallyworld and sure it isn't always $15 an hour but it isn't brain surgery either. And if it was $15 an hour then Wal-Mart wouldn't be the biggest and cheapest retailer. It's called capitalism. Not perfect, but better than anything else.

Labor unions are not inherently evil. They may have done some great things a century ago but they have also stymied innovation. For example, Uber has had to fight taxi unions in order to serve in certain areas. They have also led to violence at times and we all know they are a giant Democratic Super PAC.

But the workers at Cloud 9 are convinced that they have to take a stand for Cheyenne and also for Glenn who gets fired for “suspending” her for 6 weeks with pay. So they all just walk out!

Jonah: Is this gonna work?

Garrett: So what now?

Dina: Attention, please. Listen up. I have something I'd like to say. I know you're scared. This is a big moment. But rest assured Cloud 9 will be fine without you. Anyway, I've demagnetized your keycards, and you will receive your final paychecks in the mail with the costs of your vests deducted from them. Nothing personal. I wish you all luck, but I've got a store to manage.

Harsh truths for the Cloud 9 employees. Certainly not the result they were all expecting. Then again all the recently unemployed cashiers and food service employees in Seattle didn't see reality coming either.