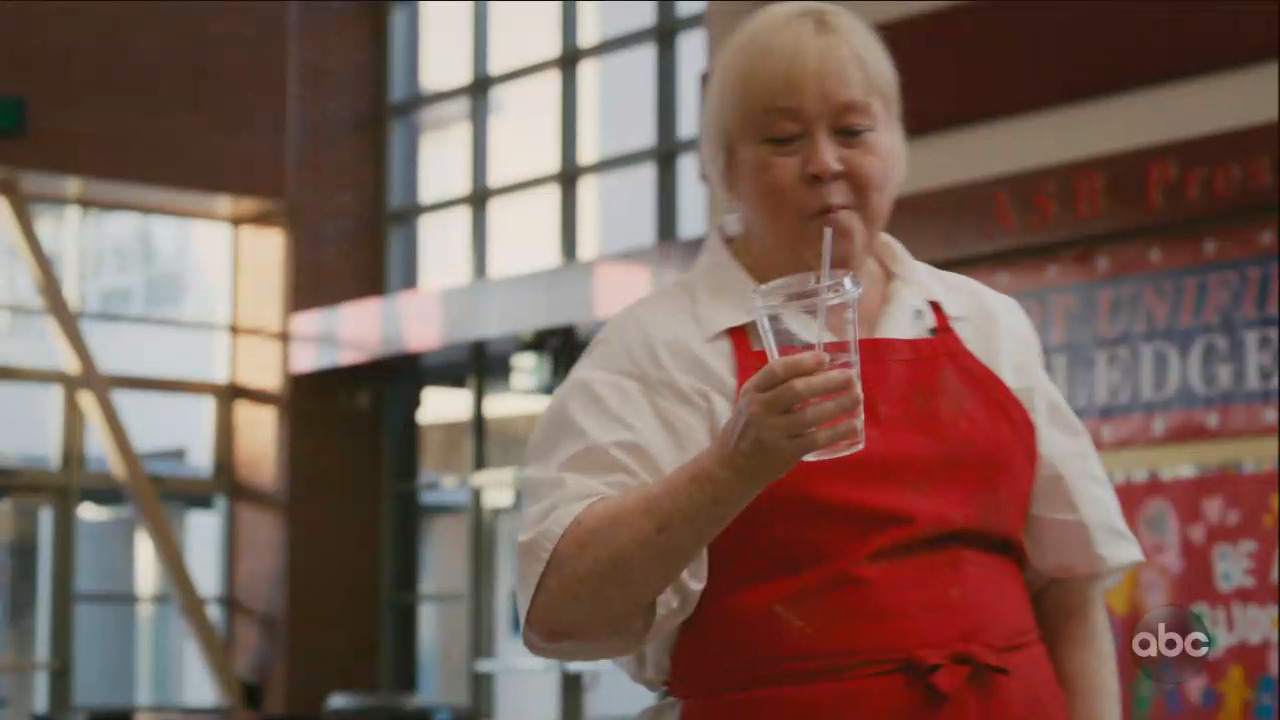 Husband Greg (Diedrich Bader, The Drew Carey Show), who was proudly called a “feminist” in previous episodes, is busily indoctrinating his middle-school daughter Anna-Kat (Julia Butters) in environmental causes. After Anna-Kat discovers that the lunch lady (guest star Kathy Kinney from The Drew Carey Show ) at her school is using plastic plates, she rushes home to tell her father.

Anna-Kat: The lunch lady won't use real plates. She uses plastic ones and then just throws them away.

Greg: What? Not in my school.

Anna-Kat: I tried talking to her, but she won't listen.

Greg: This is a job for the recycling committee. Bill Doty and I will take it from here. Sounds like the lunch lady just needs to be educated.

Anna-Kat: Yeah, and if that doesn't work, we'll recycle her face!

Greg: You get more like your mother every day.

After making a joke about punching the lunch lady, the characters then plan the public “shaming” of the hassled woman. “Well, we tried to reason with the lunch lady,” Greg’s friend Bill (guest star Ryan Stiles from The Drew Carey Show) laments. “But that didn't work. So, unfortunately, we have to use public shaming to get our point across,” Greg replies.

Greg and Bill bring in “Mr. Green” (Drew Carey) to pressure the cafeteria worker into submission. Mr. Green reveals that he went through the lunch lady’s trash to expose all her supposedly eco-unfriendly practices. “You throw away batteries. Do you know what could happen to you for doing this? Nothing? Well, yeah...for now. But when this becomes a law, you are in mild amounts of trouble, lady,” he warns her. He says he's found "enough to charge you with murder. Of a little lady called... Mother Earth!" The lunch lady eventually relents after Greg and Anna-Kat agree to wash the dishes in the afternoon if she uses non-disposable plates.

The left regularly recruits and indoctrinates children to promote their political agendas, with the troubled Greta Thunberg being the most recent example. As Anthony Esolen notes at American Greatness, politics is increasingly crowding out childhood. Therefore, Anna-Kat cannot just be a kid enjoying lunch. She is turned into a radical who must harass the working-class cafeteria worker in order to save the planet.

Public “shaming” by radical leftists is also a serious issue. As conservatives know too well, employees have been forced out of their jobs and humiliated for refusing to toe the “woke” line. One wonders what the next step would have been if the lunch lady refused to relent. If it was anything like today’s extreme left, Greg and Anna-Kate would have probably called her out on social media and pushed to have her fired.

Hollywood writers may find the weaponization of children and the public shaming of working-class employees amusing fodder for a sitcom. Out in the real world, Americans are sick of it.