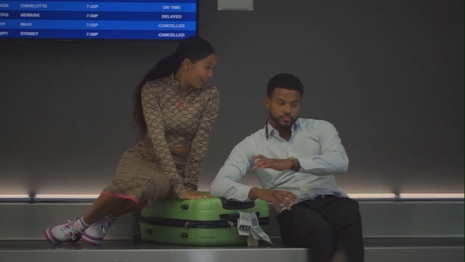 Freeform's racist sitcom grown-ish is back from winter hiatus. Unfortunately, so is its anti-white racism.

Zoey and Aaron are now a long-distance couple who are surprised to discover they’re stuck at the same airport while waiting for their flights. Aaron says he’s heading to Seattle for “Metaverse’s corporate responsibility and diversity panel,” moderated by Jemele Hill (of course).

When he tells Zoey all that the company is paying for, she responds, “Look at my man cashing out on corporate white guilt. I love to see it.”

Zoey: I can't believe that you're here.

Aaron: This is crazy. I mean, you're on your way to Tokyo...

Zoey: Yeah, you're off to Seattle.

Zoey: Right, the one Jemele Hill is moderating.

Aaron: That's the one. Yep. Thank you so much, ma'am, for nothing. Oh. Appreciate you.

Zoey: What'd she do?

Aaron: Sorry. Let's not talk about that. But, hey, they're paying for my flight. They're gonna pay for the hotel. Starting to feel like a pretty cushy side hustle.

Zoey: Nice. Look at my man cashing out on corporate white guilt. I love to see it!

Zoey: But they really couldn't spring for a direct flight from LAX to Seattle?

Aaron: Oh, no, they did, but we had to make an emergency landing. Apparently, the guy vaping in the airplane bathroom was the best thing that ever happened to me.

Zoey: Well, you know my flight's delayed for at least a couple hours, so...

Zoey: Does that mean that I am stuck at the airport with my favorite person?

Aaron: I wouldn't say stuck. I'd say we're winning. Let's live it up.

Zoey: What's all that?

Aaron: Airplane Bucks. So, if you complain enough to the airline, they'll shut you up with, uh, coupons to the worst airport shopping in America. The only question is, how do we spend it?

So, when a white woman complains to management and gets freebies, she’s an annoying “Karen” that no one can stand. But, when a black man does it, is that supposed to be more "cashing out on white guilt?"

Note to the show’s writers: No amount of “adorable couple dancing in an airport” makes racism cute. We hate to see it!

Conservatives Fight Back! This episode was sponsored by Land Rover and Huggies. Click each advertiser for their contact information so you can let them know how you feel about them sponsoring anti-white racism.