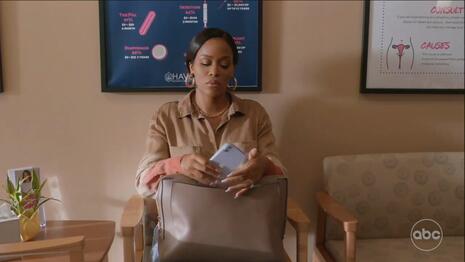 While America debates over various state initiatives to recognize and protect the lives of unborn children, pro-abortion Hollywood sometimes slips and forgets to use their typical, manipulative lingo to sway viewers away from what’s being “chosen” in every abortion - the killing of innocent human life. Such was the case on Tuesday’s episode of ABC’s new drama Queens, where the word “baby” was used five times to describe the unborn child a character was unexpectedly carrying and planning to abort.

Queens centers around four female R&B stars from the ‘90s who are reuniting in their 40s in an attempt to relive their former fame and glory. Real life artist Eve, who is ironically pregnant herself in real life and is taking a break from the second season of the show to focus on motherhood, plays Brianna who recently discovered that her husband Jeff (RonReaco Lee) was unfaithful with his student Alexis (Hannah Masi).

Jeff passed away from a brain tumor in the last episode, and we found out that Alexis is pregnant with his child. Because Alexis has no one else and is vulnerable, Brianna has compassion for her. As the two discuss the situation, there’s no hiding the humanity of the child, Brianna even discusses the baby as a sibling to her own children:

Brianna: I'm sorry. Listen, it's just that this baby will be a sibling to my kids.

Alexis: You want to know if I'm going to keep it?

Brianna: Yes. It's selfish, but yes.

Alexis: What would you do if you were me?

Brianna: This is your choice.

Alexis: I'm 24. I've got insane student loans. I have roommates. I'm not ready to have a baby. But I loved him.

Brianna: It's totally cool to never, ever say that to me again.

Alexis: I need time to think. Is that okay?

Brianna does, however, secretly hope that Alexis will choose to end the baby’s life via abortion. When she later discusses the situation with the other ladies of Queens, they speak truth as well and refer to the unborn child as a “baby.” Brianna is still abortion-minded, but at least everyone agrees she shouldn’t be pressuring Alexis to choose abortion.

Brianna: Y'all, my mind is twisted. I have no idea what Alexis is gonna do about this baby.

Naomi: You met with Alexis?

Brianna: She is having my husband's kid.

Valeria: I had this exact storyline on "Guiding Light". I was the mistress. I had the baby, for what it's worth.

Brianna: I can't be the chick to tell another chick to get an abortion.

Naomi: Mmm hmm, even if that's what you're thinking.

Alexis decides to have the abortion, once again telling Brianna, “I can’t have this baby.” She even goes so far as to ask Brianna to go with her, which Brianna agrees to do, replying, “You shouldn’t have to go alone.” Where they’re going is revealed when another friend asks Brianna if she’s “really gonna take this girl to Planned Parenthood.” Brianna confirms her decision, explaining that Alexis has no one else.

But when Brianna waits for Alexis at Planned Parenthood, she never shows up:

Brianna: Shut up. Wait. Did she tell you where she was going?

Jill: You seriously don't want me to be here.

Brianna: I need you. I need you here. That's the whole point, Jill. She's gone. Alexis is gone with that baby inside of her, and I don't know what she's gonna do.

Jill: We'll figure it out, okay?

It’s probably too much to hope that Hollywood may be starting to realize the humanity and worth of unborn human life, but we can at least be thankful for episodes such as this where the writers don’t attempt to dehumanize the child with manipulative language and that the baby isn’t aborted after all. (At least for now.) That’s still a victory for life whether it was intentional or not.

Conservatives Fight Back! Contact Kohl's, Expedia, and T-Mobile to thank them for sponsoring an episode that recognized an unborn child as a "baby."