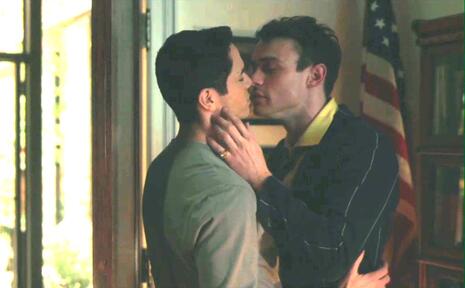 When we left off with the creepy and perverted new Gossip Girl reboot on HBO Max last week, we, unfortunately, had the displeasure of seeing a teacher, Rafa Caparros (Jason Gotay), give into having gay sex with his male student, Max (Thomas Doherty), something that was completely unjustifiable despite Max claiming to be “of age.” This Thursday, in the opening of the episode, “Hope Sinks” (if you had any hope that the show couldn’t go any lower, those hopes will be sunk), we were forced to see Max giving his teacher oral sex in a classroom next to the American flag as students and teachers walk by just outside the open door.

The low screams and groans from Rafa in this scene of Max pleasuring him are juxtaposed with the terrified screams of students after a gun falls out of a backpack onto the floor in a serious scene at a neighboring school. Umm, what? What kind of a warped mind thought that would be cute to put side-by-side? Oh, wait. We already know the answer to that.

After finding out Max hasn’t been at home much for the past week, Aki (Evan Mock) realizes Max has been hanging out with Rafa. Worried for his friend who he has a confusing sexual attraction to, and who he cheated on his girlfriend with, Aki confronts Max at school to warn him of the consequences of his actions, saying, "This can ruin his career, Max. This can follow you around forever. For life."

When Aki can't get through to Max, he decides to confront Rafa at a bar, at which point Rafa refers to himself and Max as “adults” right after Aki points out that Max is just 17. Rafa decides to threaten Aki with a false sexual harassment allegation and tells him to “leave the adults to make our own decisions.”

Rafa: I gather this isn't a coincidence?

Aki: More like an intervention. I was hoping I can convince you to stay away from Max Wolfe.

Rafa: What are you doing here?

Rafa: I have no idea what you're talking about. And no idea why you've decided to talk about it here.

Aki: What? Would you rather me wait till he arrives?

Rafa: But you won't. Because you already tried this with him and it didn't work. Or you wouldn't be here.

Aki: I have an idea. A photo of you two here. Sent to Gossip Girl for the whole world to see.

Rafa: Here's what's gonna happen. You're gonna leave. And I won't tell Max you were here for the sake of your friendship. But if you ever try to say or send anything to anyone... I'll tell everyone how wildly inappropriate it was that you hit on me. And after I said no, stalked me. And I had no choice, but to ask your friend Max for help. From there, it's a pretty short jump to suspension or-- Hey, man, don't touch me!

Rafa: This kid just got a little too close. You might want to check his ID. Pretty sure he's underage.

Rafa: I know that everyone just saw that. I've got witnesses to back my story up. Go home, Aki. And leave the adults to make our own decisions.

Later at a Halloween party, Max meets a former student and lover of Rafa’s who points out that sleeping with his students is very much a thing for Rafa despite Rafa resisting Max’s advances for a long time and telling him in a previous episode he doesn’t “fuck” his students. Max confronts Rafa who tells him, “They were all legal, just like you.” Max is finally disgusted by something for once in his life and breaks up with the predatory teacher.

At least that’s one fewer creepy storyline we’ll be subjected to as the rest of the season plays out, but don’t get your hopes up that the show won’t find new ways to disgust lest those hopes sink once again.

Conservatives Fight Back! Don't like the predatory sexual depiction of children that is rampant in this show? Send the creator Joshua Safran a tweet (@anthologist) to let him know how you feel.