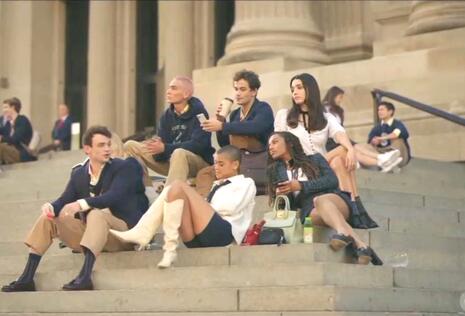 When the original Gossip Girl series aired on The CW from 2007-2012, it caused a lot of controversy for its depictions of teen sex. But those scenes have nothing on the graphic sexualization of teen characters shown in the new Gossip Girl reboot on HBO Max which, along with a newfound wokeness, we're told is essential for realism.

This blatant sexualization of minor children in Gossip Girl is very avant-garde in the minds of Gossip Girl creator Joshua Safran and his fellow writers/producers. Safran gushed to The Daily Beast, which noted there's "a lot more sex than the first go-around," that his teen characters are “beautiful people” who “can make anything sexy” and said, "I’m happy to be able to explore character through sex in a way that we couldn’t with the CW."

As an example, he spoke about an upcoming “rim job”[!] scene, which is sure to be controversial, claiming that real-life teens are “trying these things earlier” and "it was a way to showcase character and also have realistic depictions."

In the same video, executive producer Stephanie Savage advised parents to watch the scenes with their kids and “have a conversation about them.” She added, “Those are things that you should be talking about at home.” My kids are grown now, but I’d give a resounding, “No, thank you,” to that warped advice if they weren’t.

Actress Jordan Alexander who plays the show’s star Julien agreed with Savage and said, “Be open with them and be like, ‘Yeah, these are things that exist and things that you might be interested in.'” Maybe don’t encourage parents to suggest an interest in rim jobs to their children.

At least one other outlet thankfully agrees that the reboot is “pathologically deranged,” and an “abject failure.” USA Today noted the show, “should not be rewarded for a plot in which adults' behavior verges on child abuse…” Several viewers took to Twitter to express their disgust over depicting teens pornographically, as well.

Classism and politics are also key aspects in the reboot, as the students at the prestigious Constance Billard and St. Jude schools are horrible people simply because they’re rich. Safran’s classist beliefs were on full display in The Daily Beast article, as he said he’s not going to apologize for making the show “realistic” back then or now.

Slate’s review of the show claimed that “rich people are destroying the planet.” They went on to quote Safran remarking:

“These kids wrestle with their privilege in a way that I think the original didn’t,” co-showrunner Josh Safran told Variety. “In light of [Black Lives Matter], in light of a lot of things, even going back to Occupy Wall Street, things have shifted.”

Jared Kushner and Ivanka Trump had cameos on the original series and The Daily Beast dedicated the headline of their story on the show to them: "Gossip Girl Creator Joshua Safran on Why Ivanka and Jared Are Not Welcome.”

“I’m assuming the Trump clan would not be at home in your new Gossip Girl,” the author stated to Safran. “Definitely not!” Safran replied emphatically. “Definitely not," he repeated for added emphasis.

I mean, the man has his limits and must draw the line somewhere! #xoxo