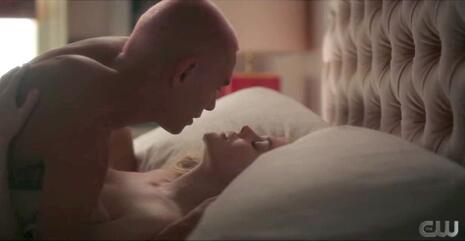 All sarcasm aside, less than three minutes into the first episode, “Just Another Girl on the MTA,” we’re exposed to a graphic sex scene after which 16-year-old character Audrey (Emily Alyn Lind) apologizes to her bi-curious boyfriend Aki (Evan Mock) for “taking so long” to climax. In fact, there are three graphic sex scenes in total in the premiere. And it’s only going to get worse, as critics with access to the first four episodes have proclaimed the show will feature a “rim job” given to one of the male characters by Audrey in episode three. Be careful Googling that term if you don’t already know what it is.

Unlike the original, which kept the identity of “Gossip Girl” a secret until the end, the reboot lets the audience know right away who the revamped gossip is - the teachers. Yes, it’s the adults who are spying on and stalking their students, taking pictures of them undressing in front of windows, and creating lies and rumors to wreak havoc in their lives, all of which is publicized on their brand-new Gossip Girl Instagram account.

Why? Because they want to take back control from the students who are running the school, humiliating and disrespecting them, and getting them fired if they don’t give the spoiled students good grades. “We own this school,” social media influencer Julien (Jordan Alexander), who is a junior and the school’s “it girl,” declares. “They work for us.”

The teachers come up with the idea to bring back Gossip Girl after learning about the original blog that plagued students over a decade ago. It’s at this point that the show throws in a touch of racism and a shot at Justice Brett Kavanaugh into the dialogue just for fun:

Kate: This Chuck and Blair thing is out of control. Definitely pre-cancel culture.

Wendy: Did you guys get to the part where she was Princess of Monaco for six months?

Jordon: Or that a high school senior got a story published in The New Yorker?

Kate: As a writer, I’m a little jealous. I mean these posts are like a lost Edith Wharton novel.

Rafa: And just as white. Goes to show, this school has always been a breeding ground for the worst kinds of people.

Kate: Is it really their faults they inherited power and influence the minute they were born without any examples of how not to abuse it?

Rima: You’re defending them? After what they just did to you?

Kate: I’m only saying we are their last hope. We’re supposed to send them out of here Barack Obamas instead of Brett Kavanaughs.

Another graphic sex scene happens as the students congregate over alcoholic drinks at an elite club, as Audrey gets turned on seeing the show’s bi-sexual, drug abusing, boy whore Max (Thomas Doherty) being groped in a throuple and then pulls Aki aside for oral sex:

(Note: The following clip was made from the edited-for-television episode that aired on The CW on Friday, July 9, so it’s much tamer than what was streamed on HBO Max. In the original, Audrey is able to climax quickly while staring at Max, and Aki notices.):

Audrey: Nothing poor about it. Don't straight-shame me.

Max: Do you ever miss coloring outside the lines? Or did you never?

Audrey: So, with all the people in this room, at this very moment, you want to spend your augmented energy on me?

Max: I don't know what it is with you and Aki, but something's different.

Audrey: In a good way?

Max: Oh, yeah. The best way. This isn't on my plan for tonight. It's all yours if you want it. You want it?

Aki: What are you doing? What's going on?

Later, Aki and Max are trying on clothes and Max urges Aki to change in front of him, as the two share lustful glances. As Audrey walks by, she catches their flirtation, but rather than feeling upset, she is obviously turned on.

Diversity is another change the reboot has focused on, as there are gay and minority characters this time around. Julien and her half-sister Zoya (Whitney Peak) are both black (there’s also one other black main character, a Latina main character, and a few LGBTQ+ main characters).

Zoya is new to the school and innocent, but Julien does her best to corrupt her, telling her they use “IG for stories,” and “Signal for sexts.” Julien advises her to “personalize” her uniform. “It’s a middle finger to the matriarchy who haven’t realized they’re upholding a system the patriarchy put into place,” she proclaims.

As the show’s narrator Kristen Bell would say in her sweetly sinister voice: We’re watching you, Gossip Girl, and here’s to hoping your premiere makes viewers as disgusted as we are and leads to your cancellation. Now *that* would be fun to watch! xoxo!

Conservatives Fight Back! The episode that re-aired on The CW was sponsored by State Farm, Taco Bell, and Starbucks. Click each advertiser for their contact information so that you can let them know how you feel about this show!