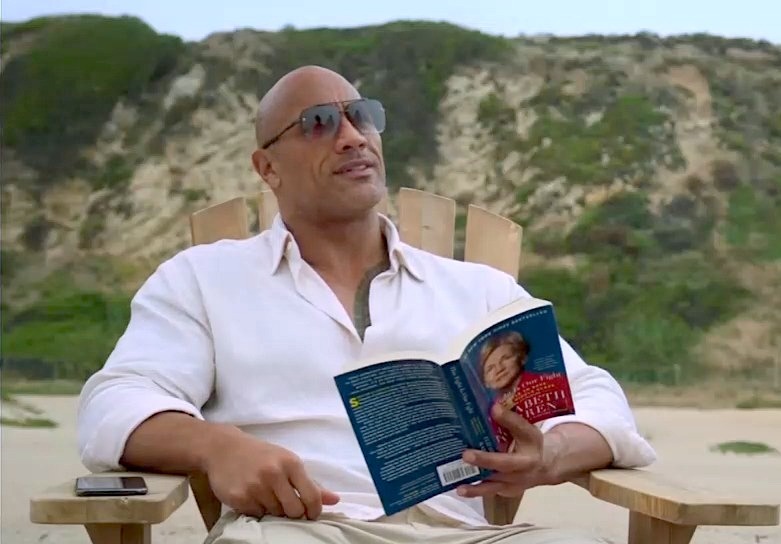 If you were hoping the season 5 premiere of HBO’s Ballers would go a bit lighter on politics than they have in seasons past, then you would’ve been sorely disappointed right at the start of Sunday’s episode, “Protocol Is for Losers.”

The NFL drama gave a nod to Democrat Massachusetts Senator and 2020 presidential hopeful Elizabeth Warren via its main character Spencer Strasmore, played by 2019’s highest-paid actor Dwayne “The Rock” Johnson who is also a producer of the show. Warren and Johnson also exchanged tweets before the episode aired, leaving many to speculate that Johnson might possibly be a potential vice presidential running mate for Warren.

The scene in question opens with Spencer enjoying retirement on the beach with his girlfriend while reading Warren’s book, This Fight Is Our Fight: The Battle to Save America’s Middle Class.

Tracy: Hey. Time for a swim.

Spencer: Ah, you know what? You go. I have one more chapter left.

Before Sunday’s premiere, Warren tweeted well wishes to Johnson and expressed her excitement for the newest, and final, season of the show, and Johnson tweeted his gratitude to her in reply, telling her, “Best of luck and thank you Senator for all your hard work on behalf of our country.”

Can’t wait for the Season 5 premiere of @BallersHBO tonight (Bruce and I still can't believe there won't be a Season 6). And congrats @TheRock on your marriage!

Mahalo, my ballin’ friend (thanks Bruce too)
It’s been a helluva run and I’m grateful to the people. Thanks for the (basketball emoji) and (chain emoji), I mean happy marriage well wishes (wink emoji)
Best of luck and thank you Senator for all your hard work on behalf of our country.
Enjoy @BallersHBO tonight (fist emoji)https://t.co/uBjuk6iRTS

Warren has 3.1 Twitter followers, while Johnson has more than four times as many at 13.7 million. After Warren’s book made its cameo appearance, her official campaign Twitter page (which has 36.8 thousand followers) celebrated with this tweet:

You love to see it: @TheRock reading “This Fight Is Our Fight: The Battle to Save America's Middle Class” by @ewarren. pic.twitter.com/YPh3Uwp7aC

A few more people shared their thoughts about Johnson being a possible VP running mate in reply to that tweet, as well. Interestingly, an article on Boston.com from 2017 that discussed Warren’s love for Ballers referred to both Warren and Johnson as “two sought-after 2020 presidential candidates.” The article also noted that Johnson was quoted in British GQ as saying, “I can’t deny that the thought of being governor, the thought of being president, is alluring.”

In a meta twist, just as Warren’s book is shown in the first scene in the Ballers season 5 premiere, the show just happens to be mentioned on the first page of her book, where Warren noted that she and her family were binge-watching Ballers on election night in 2016 as they waited for results to come in. She wrote, “Ballers” was terrific. The 2016 election, not so much.”

Warren also posted her admiration for the show on her Facebook page in 2017. A story on The CUT does a fairly good job explaining why Warren and Ballers make for strange bedfellows, but you’ll have to stomach their classism and attacks on wealthy Americans if you care to read it. Vanity Fair confirmed Warren’s love for the show, as well, even going so far as calling her a Ballers “superfan.” They also noted a previous exchange of tweets between Johnson and Warren in May 2017. Warren spoke of her love for the show to “despondent” Samantha Bee, as reported by Boston.com. And Warren told Pod Save America in 2018 that Johnson was the reason for her love of the show, which she shared in a tweet. Again, Johnson replied.

Warren also tweeted that she has a “not-so-secret crush” on Johnson which was accompanied by a photo of an autographed script from Ballers that she happens to keep on her desk in Washington. Every tweet that Warren and Johnson have sent to each other has led to many replies speculating on a Warren/Johnson 2020 presidential ticket ... they smell what The Rock is cooking.