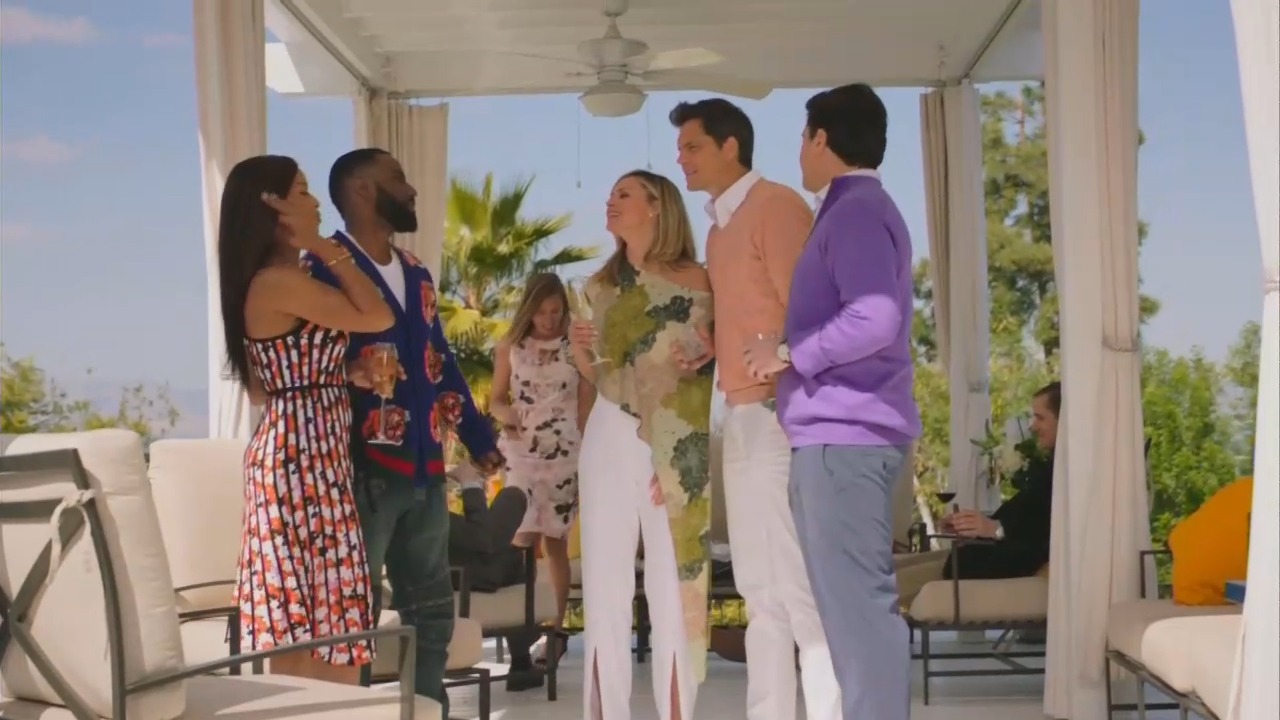 HBOhhh no they didn’t! Unfortunately, yes, they did. Again. HBO’s hit dramedy Ballers can’t seem to stop with the race wars and heavily leftist storylines, it seems. Only this time, they really upped the ante, saying "Fuck Trump," calling President Trump a “racist-ass bitch,” and praising controversial Colin Kaepernick for “leading a movement” which should be respected.

In Sunday’s episode, “The Kids Are Aight,” retired football player Ricky (John David Washington) as well as his wife, dad and best friend go to a neighborhood pool party hosted by their new neighbors, “The Whites,” who happen to be white, of course.

And, of course, everyone at the party is white and playing croquet, badminton, and toasting with champagne as Ricky’s deadbeat friend TTD (Carl McDowell) begins to notice. He starts going into a dream-like, hypnotic state as everyone stares at him, and a white woman sits nearby stirring her tea, clearly referencing the infamous scene in the movie Get Out where, according to Yahoo Entertainment, “The film’s African-American characters are forced to deny their own thoughts and experiences to become more like white people.”

We then see Ricky and his wife chatting with the Whites and other guests which leads to a very awkward conversation.

Joyce White: He's only been in for a year. We have to give him time.

Jerry: I mean, sure, Trump is an eccentric, but so were so many of our great leaders. Imagine if Lincoln had Twitter. What? Or Teddy Roosevelt had Snapchat.

Joyce: But he is moving us forward, and the rest is just noise. I just mean you have to look at what he's doing for people like us.

Chad: Don't hate us for wanting to keep our money, right?

Jerry: Yeah, come on. We work hard, we got rich as fuck on the backs of our own sweat and tears, and he wants to let people like us keep the fruits of our labor. I think that's something that the whole country can get behind. Lookit, we didn't ask for any handouts. We did it by grinding it out, and so can everybody else.

Ricky: Yeah, I can see the calluses on your hands.

Jerry: That's what I love about you, Rick. You get it. A lot of you don't. 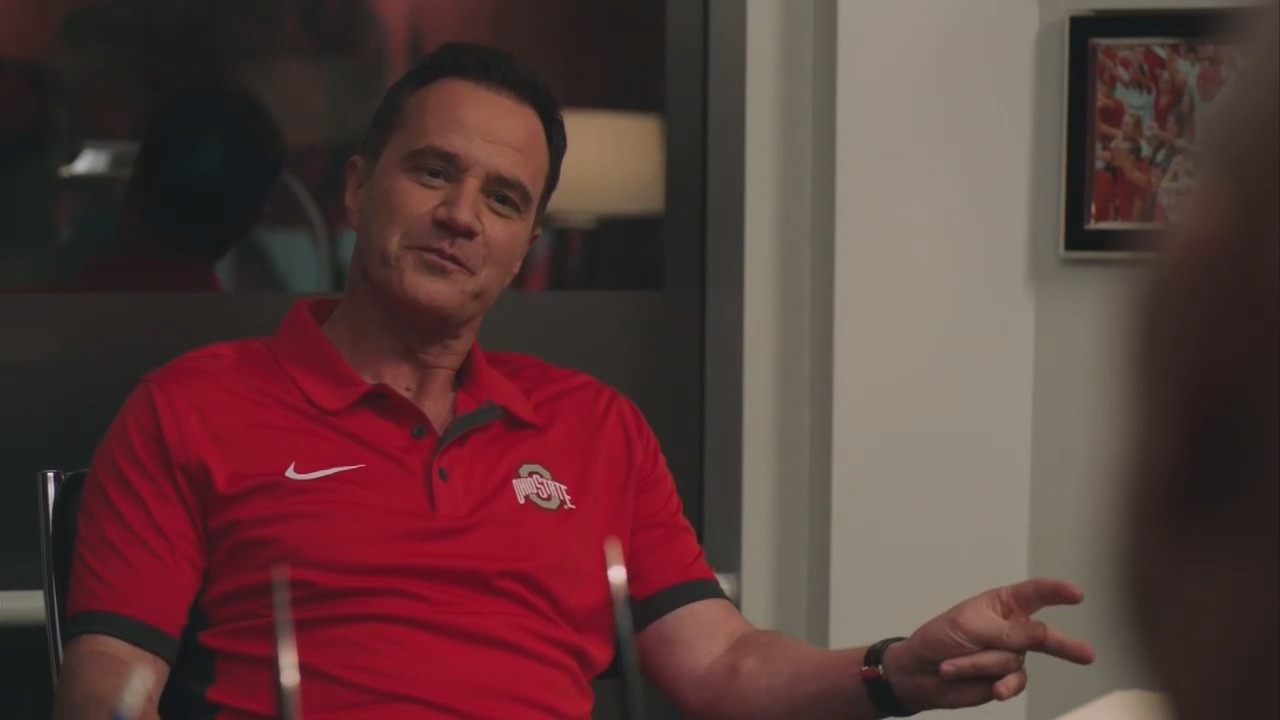 In an alternate storyline, main character Joe (Rob Corddry) is looking to make a deal with Nike, so that was a bit of foreshadowing of what was to come. In fact, when Dwayne “The Rock” Johnson’s character meets with a college rep for Ohio State in yet another storyline, the rep’s shirt clearly has the Nike logo on it, too. So, I was waiting for the Kaepernick agenda to drop at any moment.

I thought that moment might come up in one of the Nike storylines, but instead, it came at the pool party, when Ricky bent down to tie his shoe, leading the white neighbors to joke that he was “taking a knee,” setting Ricky off into an anti-Trump, pro-Kaepernick, liberal rant:

Jerry: It must be weird, huh? Being retired at such a young age.

Ricky: Well, I might surprise you on that front.

Ricky: You got a problem with athletes speaking their mind or something?

Chad: No, not on their own time. Just don't drag the flag into it.

Ricky: Y'all made it about the flag.

Jerry: All right, easy. I do have a serious question, though, for you. If you go back out there, you gonna kneel?

Ricky: Listen, do me a favor, let's change the subject, - ok, fellas?

Jerry: Whoa, whoa, wait. Are you a politician now? Come on, we're all on the same level here. You can tell us. Come on.

Jerry: He's your president too, man.

Ricky: Where the fuck is our respect, huh?!

Jerry: What are you talking about?

Jerry: This is not about race!

Ricky: My mother raised me-- a single mother on welfare. Government cheese and white bread. And I'm here because I got some assistance when I needed it.

Jerry: Ok, you're an exception.

Ricky: That's right, I am an exception. So, fuck you. 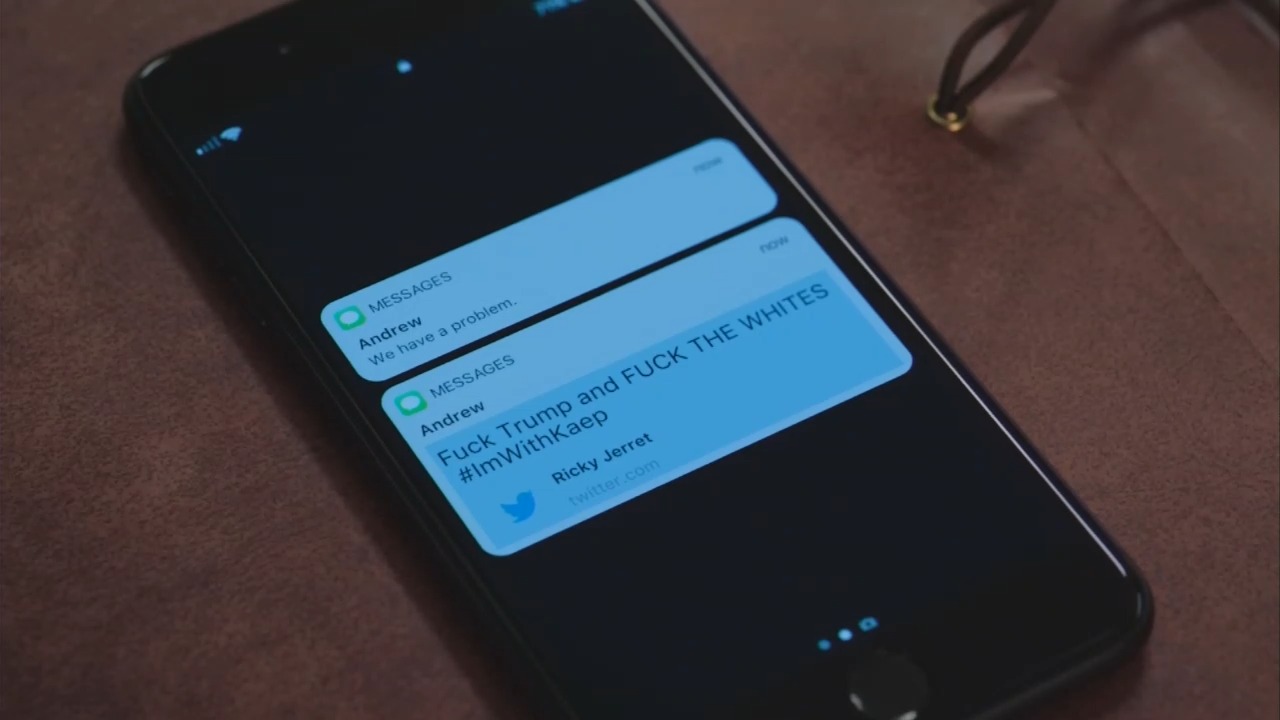 Ricky then storms out of the party and posts a tweet on his way out that reads, “Fuck Trump AND FUCK THE WHITES! #ImWithKaep” Whether he meant all whites or just his neighbors, Mr. and Mrs. White, wasn’t made clear, but it certainly seemed like a slam against all whites, given the tone of this entire episode.

When Ricky gets home, his wife Amber (Brittany S. Hall) and father Dennis (Robert Wisdom) are angry that Ricky made such a scene in front of their new neighbors. Amber points out that their baby will have to go to school with their kids and that she has to see the neighbors every day. “Baby, things are different here, all right,” Amber says. “Sometimes we gotta keep our causes to ourselves.”

When Dennis asks if Ricky wants to “end up like Kaep,” Ricky argues, “Well, that man led a movement. What are people gonna remember me for? Or you, old man?”

Dennis, a former pro football player himself, offers his son some sage advice when he retorts, “Look, a legacy is earned on the field, in the grass between the chains, not by running your goddamn mouth. So, shut it before it costs you more than you can cover.”

Previews for next week’s episode look like we can expect more of the same liberal agenda, unfortunately. Thankfully the show’s season is nearing the end, at least!