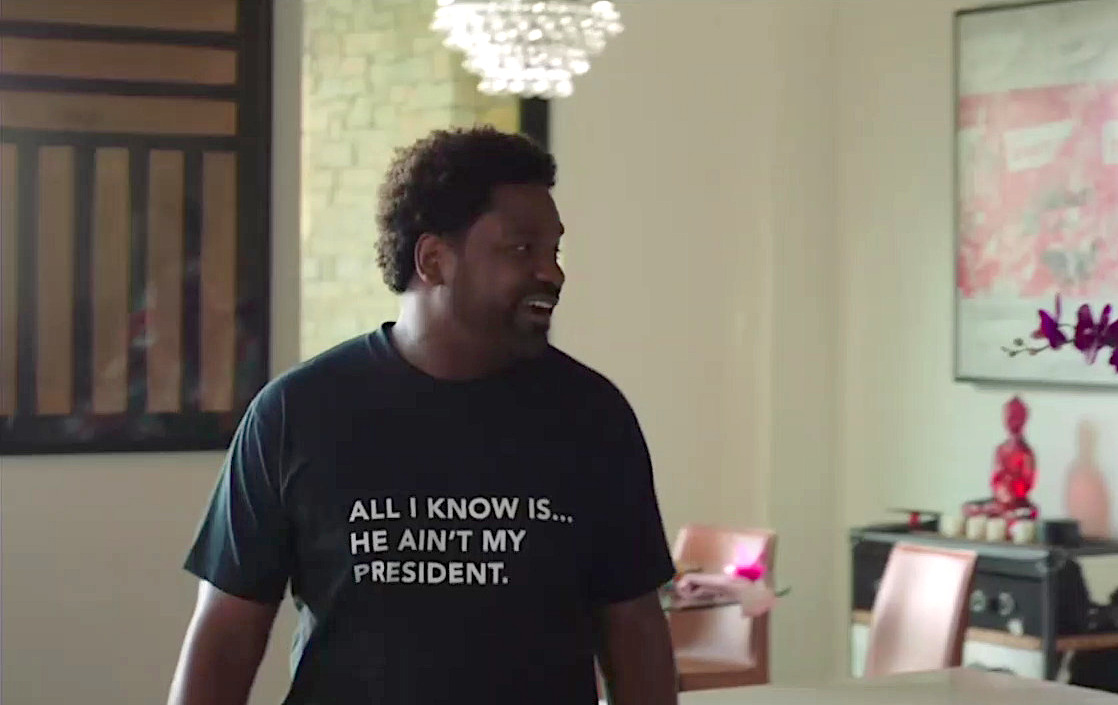 To paraphrase the late, great President Ronald Reagan, there they go again! HBO’s sports-centered show Ballers, starring Dwayne “The Rock” Johnson, featured yet another anti-Trump T-shirt on Sunday’s episode, “Don’t You Wanna Be Obama?” (The episode title alone gave us a hint that the show might throw in more anti-conservative bias as it’s been known to do in the past.)

This time, character TTD (Carl McDowell), who’s known for wearing T-shirts with messages on them, and who wore a “Make Obama President Again” T-shirt last week, shows up wearing a shirt with the cliché, but false, liberal claim, “All I Know Is...He Ain’t My President.”

As for the episode title, there was definitely praise for Obama, but in an unexpected way.  Main character Spencer Strasmore (Dwayne “The Rock” Johnson) and his business partner Joe (Rob Corddry) have teamed up with the company Sports X, run by eccentric character Lance Klians (Russell Brand), to represent pro-surfer Parker Jones.

Parker, who is a light-skinned young, black man, has been signed by Coca-Cola for a major ad campaign and sponsorship. But when he sees that his skin color has been darkened in the ad, Parker protests.

Spencer: So, what’s the problem with Lance, and how can we help?

Parker: He's a weasel who's only in it for himself.

Joe: Yeah, a little bit. Especially since he landed you that massively awesome Coke deal.

Parker: For who, Coke? That's the problem. Let me show you something real quick. This is the Coke campaign we did down on the beach. You see, this... Is what the ad lackeys turned it into.

Parker: Yeah, if my skin were that color.

Joe: What? Give me that thing! I don't see a big difference.

Spencer: You're also not gonna pretend to be somebody you're not.

Parker: Right on. Look, I'm proud to be a black man. I just don't want to be the Great Black Hope. You feel me? I just want to be one of the boys, not a "black" surfer, but the greatest surfer. Ever. Right? I'm from Laguna, you feel me? Not the hood. If they want to market me, they gotta do it for real. I don't want to be Obama, bro.

Spencer: I understand where you're comin' from.

Joe smoked a joint at the beginning of the meeting which could possibly explain his over-the-top reaction to Parker saying he doesn’t want to be Obama, but it does look awfully familiar. Typical incredulous, liberal behavior when someone doesn’t share in their Obama worship.