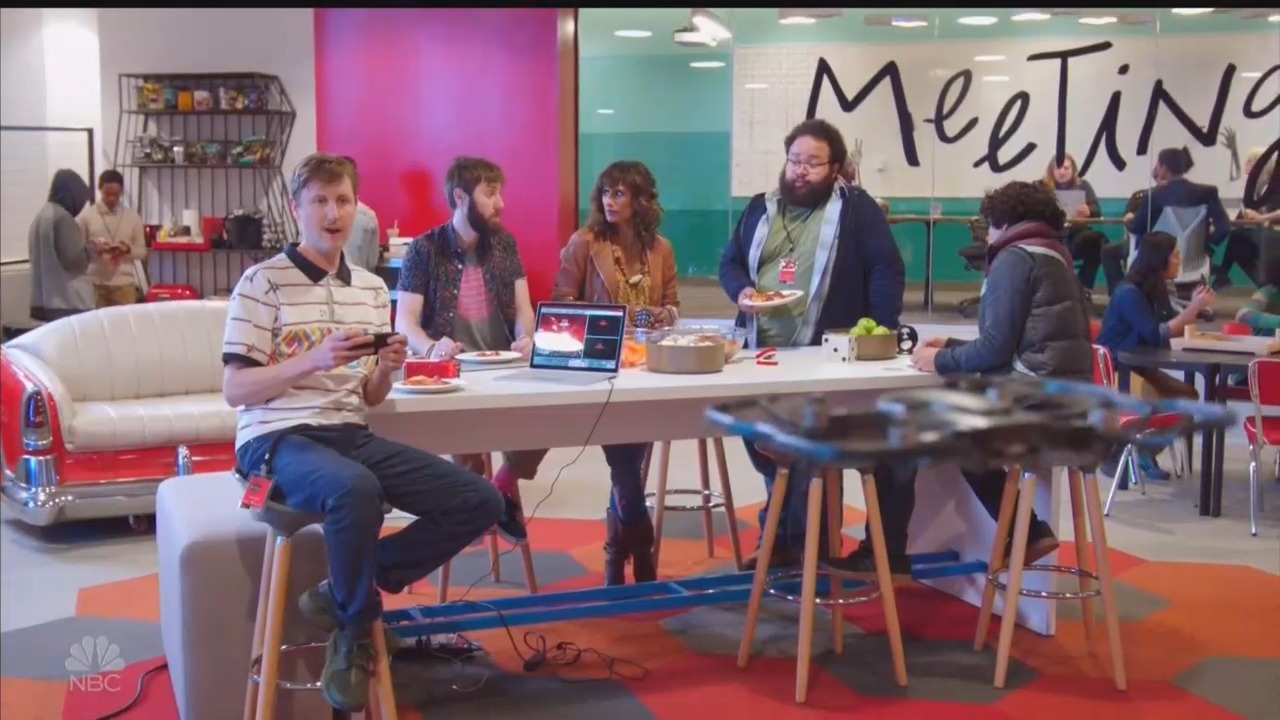 NBC premiered its new comedy, I Feel Bad, Wednesday night with a two-parter that could have been lumped into one, hour-long, male-bashing episode titled, “What Would Men Do Without Women?” And, for good measure, there’s a bit of pedophile-friendly, inappropriate dancing performed by very young, female, child actors that even makes the other characters cringe, but not enough to stop showing the little girls doing raunchy gyrations and thrusts.

I Feel Bad stars Emet (Sarayu Blue) as an overworked mom, wife, and daughter who heads up the art department at a gaming company that is otherwise only staffed by men. Adding to her already high stress levels, Emet’s parents have to move in with her and her family temporarily.

Of course, what liberal comedy would be complete without a bit of male-bashing? In episode 2, “I Get Sick of Being Needed,” Emet’s husband, David (Paul Adelstein), is demeaned as Emet condescendingly refers to him as “Humpty” because she needs to pick the pieces up and put him back together when she gets home from work. David is portrayed as insecure, weak, and insensitive. Again, just what would men do without women?

David: Oh, you’re home. Listen. You know how I have trouble reading Caleb at work?

David: Well, I decided that today was the day I was gonna show him my new press plan.

Emet: This is the part of my day where David spins out and I reassure. I call it putting Humpty David back together again.

David: That I like-- actually, that doesn't sound good either. Oh yeah, Caleb's gonna fire me.

Emet: Okay, no, no, no. Hey, hey, hey. Humpty--honey, Caleb is not firing you. You are the best PR person that airline has ever had.

Emet: Yes, they are lucky to have you.

David: Thank you, you're the best. Hey, you know what you need?

David: How about a date night?

David: How about I just spoil you? Uh-huh. So just pick a place, make a reservation, get a sitter, and I’m there!

Even though Emet describes her team of male artists as her friends, they’re painted as a bunch of dumb Neanderthals that Emet must enlighten. Emet discusses her stress at home with the team after her parents move in, and the men come up with ridiculous suggestions as to what her real problem is, complete with mansplaining:

Griff: You know what your problem is?

Emet: I just told you what my problem is.

Griff: No, okay, your problem is the same problem that all women have.

Norman: Oh, I know what it is. Um, osteoporosis.

Griff: Yeah, okay, all those things, but mainly women aren't entitled enough. You gotta take what you want.

Norman: It's true. We socialize girls to be less assertive. I actually read about a study where they asked women what part of a human centipede they would want to be, and half of them wouldn't even answer the question.

Griff: Yeah, my point is, you're never gonna get what you want if you keep acting like a woman. You gotta manspread.

Chewey: Yeah. See, manspreading is when a guy, or man, sits on a subway with his legs apart, or spread.

Emet: Okay, you don't need to mansplain manspreading to me.

Griff: Look at the wussy way you're sitting right now. You're too polite to even take up your own chair.

Emet: I can take up a chair. That's not that hard or just, like-- I can do the things that you guys-- it's actually not-- that's not even comfortable. You know what? Manspreading is gross, and I'm not doing it. I know that I can handle this in a dignified, lady way. Like Meryl Streep in everything.

Perhaps most offensive of all, however, is the storyline in the pilot episode about Emet’s daughter, Lily (Lily Rose Silver), joining a dance team. We’re shown quite a few graphic scenes of elementary school-aged Lily and her team dancing provocatively despite their very young age. The adults watching are shocked and repulsed by the moves and Emet gets her friend and employee Griff (Johnny Pemberton) to call the principal pretending to be a concerned Christian parent to get the school to shut down the team.

“Sir, I'm a very concerned, very Christian parent of a young girl at your school,” Griff says into the phone. "Now, my little sweet angel is on this very sexist, very demeaning dance team… Yeah, tell me, sir, would you ever have boys doing these type of unlawful gyrations? I say shut it down, sir… That is just fantastic. We'll--we'll talk soon, okay? Jesus, Mary, and Joseph. Bless--bless Him.”

Griff tells Emet and her team that the principal said he is going to take “immediate action,” and then adds, “That’s so cool. You tell people you're religious, and they just, like, listen to you!” Right. That’s exactly how it works in the real world. /sarcasm

Unfortunately, the school’s solution to the sexism ends up being to add a boy to the dance team, and we see even more dance moves - "Oh, my God, is he motorboating her?" - this time complete with the boy hanging Lily upside down in front of him with her crotch near his face.

This is where I would normally clip the scene to show you, but my whole point is that, despite showing everyone shocked and upset over how lewd the dance moves are, the show still decided to have the young actresses perform the inappropriate moves for all to see instead of simply implying it through the adults' reactions. Who’s looking out for these young child actresses? Not I Feel Bad, obviously! But we are, and we won’t be replaying those scenes here.

Back to the male-bashing. Emet has been trying to get her team of artists to come up with a female protagonist for a new video game that isn’t overly-voluptuous and sexualized. After finding out about the incident with Lily’s dance troupe, the men at work finally decide to revamp their original drawing. This is where men are accused of stealing women’s ideas for the whole history of humanity. And the line is even spoken by a male character:

Griff: Oh, hey, Emet. The four of us dudes couldn't stop thinking about your little girl.

Chewey: So, we took your sketches and managed to come up with a strong female protagonist for the new game.

Norman: We thought it would be cool to make a character that's a role model for girls instead of... bowling ball boobs.

Emet: Aww, you guys! Seriously, you're gonna try and pretend that's your idea? I've been trying to do that forever. Why do guys take women's stuff and pretend they've just brilliantly come up with it?

Chewey: Because it's been working for the last 10,000 years.

Griff: Yeah. Plus, she's gonna be really hot when she gets older.

Emet: You're a bad person, Griff.

Yes, apparently all the men on I Feel Bad know they are bad people. Yay, feminism, right?! Except when it comes to protecting very young, underage girls from being sexualized and made to dance provocatively for all the world to see. Where is the feminism then?

All I can say is, I feel bad after watching this hypocritical garbage masquerading as comedy.