NBC Sitcom: Boys 'Had to Go' at All-Girls Catholic School, They Were 'Distraction to the Priests' 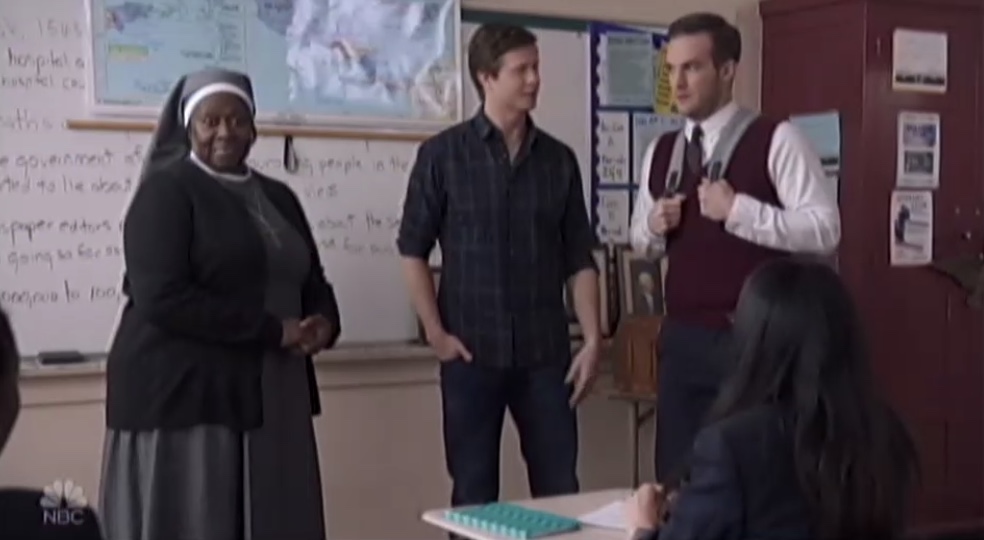 NBC’s sitcom Champions took multiple swipes at Catholic priests, straight white males and conservative sex-ed all in one episode. While straight, white men accounted for most of the jabs, coming in at five mentions, the most offensive line was against priests as a nun at an all-girl Catholic school explained that the boys “had to go” because they “proved a distraction to the priests.”

The show takes place in Brooklyn, New York, as brothers Vince (Anders Holm) and Matthew (Andy Favreau) share a bachelor pad and Vince is raising his 15-year-old son Michael (J.J. Totah) that he never knew he had before.

In Thursday’s episode, “Nepotism,” Michael discovers that his uncle Matthew never graduated high school. Sister Timothy explains that Matthew skipped too many classes at “Holy Martyrs Bleeding Feet Academy” to graduate, but she agrees to let him complete the classes he missed in order to get his diploma after he fails a GED test.

Vince accompanies Matthew to his “first day of school,” and asks Sister Timothy, “Where are all the boys?”

Sister Timothy: Class, this is Matthew. Why don't you go over there and have a seat between Laura and Ava?

Matthew: Oh, God, they look cool. I feel so fat.

Vince: If you're fat, what am I? Come on, park it. Hey, uh, Sister Timothy, where are all the boys?

Sister Timothy: They proved a distraction to the priests. They had to go.

Vince: The boys had to go?

There was also an apparent bias against straight, white men, with no less than five references and digs. The first comes as Vince brags that having a gay, half-Indian son is a “mic drop” against “any argument where I’m deemed offensive.” Next, when Vince asks his coworkers for advice on what he can teach his gay son about sexual education because everything he knows about gay sex he “learned from graffiti,” his coworker Ruby (Fortune Feimster) replies, “Yes, God forbid a straight, white man has to learn about something outside of his comfort zone.”

Later when Matthew says he feels he didn’t study enough about women or Native Americans for the GED test, Michael tells him, “Eh, they never ask about that stuff. America’s a white man’s game. You’re gonna ace it.”

As if that weren’t already overkill, the writers have Vince say that he’s “just a straight, white guy struggling to give a meaningful 'bees and the bees' talk” to his gay son. I’m not quite sure, but I think the show might be trying to tell us that Vince and Matthew are straight, white guys? I mean, because clearly, we can’t tell that by looking at them.

Yes, I think that’s definitely it, because, just in case we had any doubt after the first four mentions, Matthew hides in his room, upset after failing the GED test, and proclaims, “I’m officially an uneducated white man. The only thing I’m qualified to do is explain things to educated white women.”

Oh, okay, I get it. They’re not only straight white men, but straight, white men are bad, bad people! Got it! I might not have gotten it at just four mentions, so it’s a good thing they went for five!

There’s also a lot of STD and sex-ed talk after Vince finds a poster of an attractive male actor hanging in Michael’s room, including Michael’s mother Priya (Mindy Kaling) telling Vince that “Ohio’s so conservative that they teach you that condoms actually increase your chance of STD’s.”

Oh yes, those awful conservatives just have it all backwards! Because saying to your 15-year-old son, as Vince does to Michael, “Erections! Why do we need ‘em? Why can’t we just lay back, do nothing, and orgasm no problemo like the women do,” is so much better than conservative sex education. Or maybe Michael’s “old-fashioned” gay sex-ed preference of “ask a closeted art teacher” is better?

And yes, this is only a half-hour show. Can you imagine how many jabs there’d be at priests, straight, white men and conservatives if it were an hour?