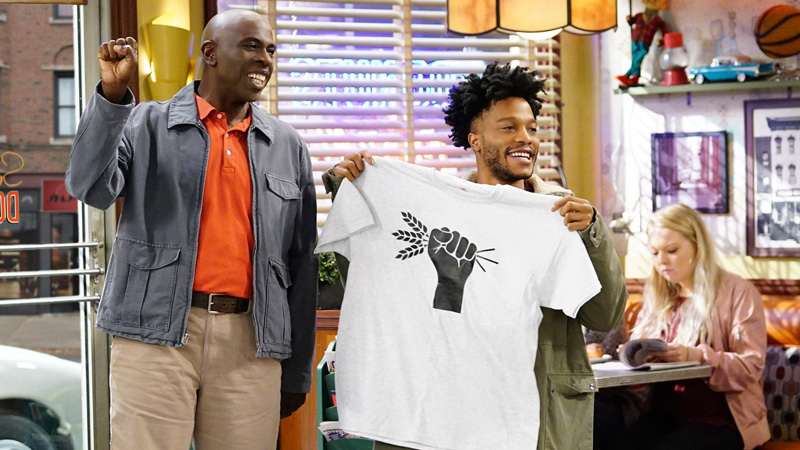 CBS’s Monday, November 27 episode of Superior Donuts, “Flour Power,” was filled with liberal lectures on political correctness, with particular attention paid to racism, “homophobia,” and sexism. Of course, hate is wrong in any form, but as we know, the leftist PC police tend to go overboard with what they deem unacceptable behavior, and this episode was no exception.

Monday’s episode centers around a gay pride parade that’s happening in Chicago, and donut shop owner Arthur Przybyszewski (Judd Hirsch) says it’s his biggest day of the year for donut sales because it's “the only day the gays eat carbs.” That was one of approximately 500 other gay jokes during the show, such as a “Vagitarian wrap” special for lesbian parade-goers.

But the real purpose of the episode is to lecture us on “microaggressions” as donut shop employee Franco (Jermaine Fowler), who is black, takes offense to what he feels are racist remarks from Murray, Arthur’s flour supplier. Murray is white and jokes around with Franco by calling him L.L. Cool Franco and asking him if he saw the Bull’s game. “What are we gonna do without Jimmy Butler,” he asks Franco. “Might need you to suit up.” When Franco says he doesn’t really play basketball, Murray is surprised and says, “Go figure.”

Franco’s friend “Sweatpants” (Rell Battle) accuses Murray of using “microaggressions,” or “small but offensive comments that unintentionally reinforce a stereotype.” But Arthur feels that Franco is “just being a little too sensitive,” which sets the Social Justice Warrior off. “Yo, you don’t get to end the argument by telling me I’m too sensitive,” Franco says.

Sofia (Diane Guerrero), a “young, Columbian-American gentrifier” who operates a food truck outside of the donut shop offers this profound thought: “Sometimes things sound innocent, but they’re not.” She then points out that people compliment her on her English by saying, "You speak English so good.’’ “P.S., it's ‘so well.’ I know this because I went to the University of Wisconsin,” she says.

Muslim patron “Fawz” quips, “Well, I can't think of anything more American than complaining about teeny, tiny insults no one can see. In Iraq, we can't hear the microaggressions over the bombing and the screaming!”

Of course, as it turns out, Murray really is racist, and his comments end up getting worse. It would’ve been nice to see a lesson about how people can be innocent and not mean anything offensive when they simply ask a black person if they saw a basketball game, just as they’d ask their white friends. But then we wouldn’t learn any important liberal lessons, would we?

Franco finally fires Murray and says, “Arthur, we have an opportunity here. Money talks. If we give our business to principled people, it'll encourage people to act that way.” Arthur tells him he has two days to find a replacement.

Franco ends up finding a man named Howard who owns “Black Flour Milling” and the “Black flour!” jokes ensue. Howard seems great at first, until he starts making sexist comments towards women. He starts with Randy when she complains about her shoulder hurting.

Howard: Well, I have a theory on that. It's all those giant purses you carry. I mean, why do women have to pack a suitcase just to get their nails done?

Fawz: They need something big enough to carry all that bitching and moaning, huh?

Randy: Actually, I got shot in the shoulder. Because I'm a cop.

Howard: Damn. This city is messed up if they're shooting meter maids.

Sofia: She's not a meter maid, she's a patrol officer.

Howard: No kidding. Well, good for you! Hey, I got more shirts if anybody wants one. I'll grab them from the truck. Oh.

Franco: I love that dude, man. See, I told y'all we can find somebody that's great.

Randy: "Great"? Did you hear what he just said about me being a cop?

Franco: Yeah, he said he was impressed.

Sofia: He was impressed that she has a job that a man normally has.

Fawz: I was happy for you!

Franco: Randy, I'm sorry, but I think you're just taking it the wrong way.

Sofia: Oh, are we being "too sensitive"?

Arthur: This would be a great conversation to have, after I get my damn flour.

Randy: Arthur, you cannot do business with that guy.

Franco: And why not? He is not as bad as Murray.

Randy: Oh, so you're telling me that racism is worse than sexism?

As a woman, I would take it as a compliment if a man told me, “You’re such a strong woman,” or “You’re so independent.” I cautiously assume the best in people before judging them as having an impure motive.

Arthur wants to call Murray back after Howard ends up being sexist, but Franco implores, “Yo, look, I can find somebody principled, Arthur. I still got time. If we take the easy way out, nothing's gonna change.”

Sofia then suggests Progressive Co-op Flour. “Their flour is non-gmo, and it's milled in a pansexual, solar-powered farm collective,” she proudly explains. Interested business owners must first fill out a “soul survey” before being allowed to partner with the company to ensure that their customers have “positive energy and good karma.”

Franco: Lyric, thank you so much for getting that flour so quickly.

Lyric: Oh, no worries. I was already on my way to a protest against patriarchal, gender-conforming children's books.

Fawz: And now another episode of "Why Trump Won."

Sofia: Franco is encouraging his boss to only do business with companies with strong principles.

Lyric: Well, then that's us. For every empty flour bag you return, we clothe a family of six in Ecuador.

Fawz: With one bag? How big are these people?

Lyric: Look, we don't want to participate in polluting our Mother Earth. So, we reuse and repurpose everything. This belt was made from those plastic six-pack rings that strangle sea turtles.

Fawz: Whoa. My wallet's made out of turtle. Oh, it was a gift. The turtle-- which was a boring pet, so I turned him into a wallet. See? I repurpose, too.

Lyric: You give bald people a bad name. Namaste.

Sofia: Namaste. I know she's a lot to take, but she's a really good person. And you got your flour.

Arthur: And our rainbow donuts.

Franco: Yeah! Made from the world's most socially-conscious flour! MMM. MMM. Interesting.

Sofia: Yeah, I'm getting notes of vanilla and nutmeg.

Sweatpants: Really? 'Cause I'm getting notes of tree bark and ass.

Arthur: These are terrible. Throw 'em out. I'm calling Murray.

Franco: You're not calling Murray.

Arthur: Look, we have no choice. The parade is tomorrow. Experiment over.

Franco: Arthur, you just don't get it, man. And you know why? 'Cause you're an old white guy. You're never gonna understand how I feel. Or how they feel. And that's okay. That's cool. But if you're gonna use Murray, man, just... At least have my back and do the right thing.

Franco: Talk to him. Tell him to get his ass in line.

At least they’re starting to grasp how and why Trump won, haha. But to suggest that Arthur just doesn’t “get it” because he’s “an old white guy?” Isn’t that exactly what Franco is trying to fight - racism and stereotypes? Racism is never okay, no matter who is being racist. And Arthur proves he "gets it" by agreeing to stand up for Franco. Besides, wasn't it Franco who was just laughing at all of the sexist microaggressions coming from Black Flour owner Howard? Who is he, then, to suddenly act so morally superior to the "old white guy?"

In the end, Murray comes back and Arthur has a talk with him. Everyone is surprised to find out that Murray is offended for his own reasons - he's gay, but has hidden that fact because he's heard gay cracks at the shop over the years.

Murray agrees to be more careful with how he speaks and all seems to end well in liberal land. Until Murray complains that he's "blocked in by some Chinaman" and Arthur realizes he won't change. He and Franco finally decide they need to "keep looking for a flour guy."

Hey, wait! Flour guy? Isn’t that sexist?! There was a flour girl after all! (No pun intended.) I am completely offended! I want a show with principled people as the writers! Because, “sometimes things sound innocent when they’re not,” and I take exception to this microaggression!

And they’d better not dare call me sensitive or say I’m overreacting either, just because I’m a woman! By their own logic, Superior Donuts should be cancelled. After all, “If we take the easy way out, nothing's gonna change.” Right?