Hollywood is arming themselves with the written word and preparing to do battle in politics. With the fall television season, Hollywood writers and actors bring a barrage of material aimed at portraying President Trump and his policies in the worst light possible. As of September, there are 16 scripted television shows either already airing or scheduled to air that focus on attacking Trump in their plots. 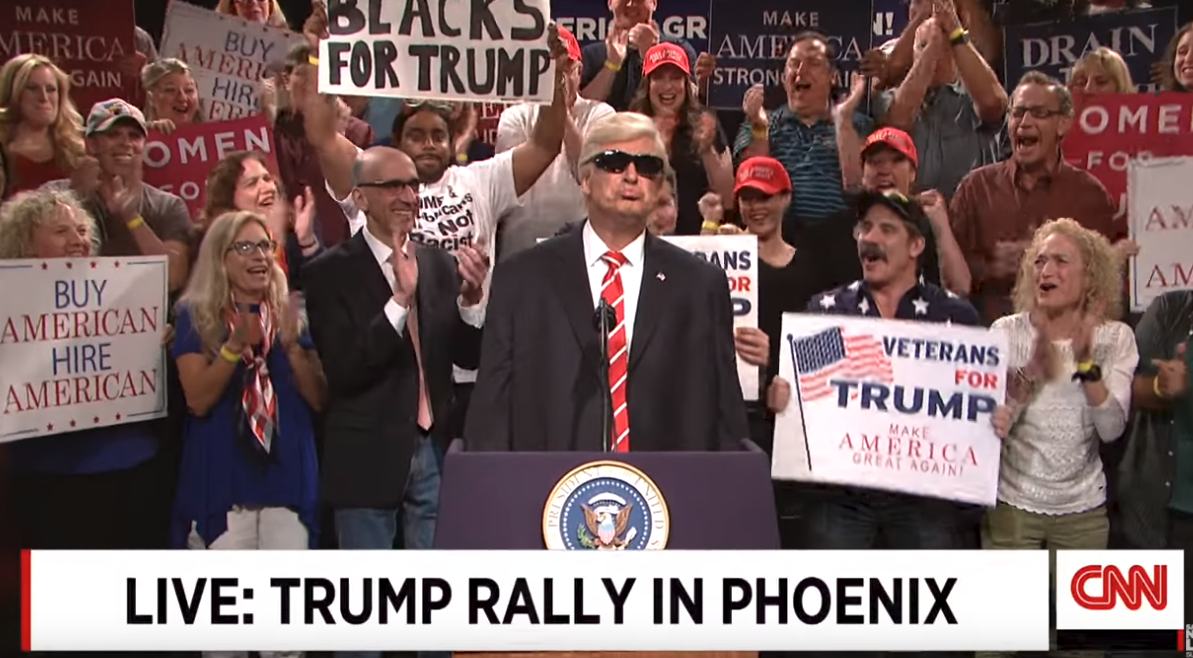 Two Trump impersonators currently mock the president’s every move, two science fiction shows depict villains based on Trump, and five new shows are set to gain publicity through assailing Trump, supposedly as a way to enlist viewers. American Horror Story: Cult has already had one character state that Trump will “kill us all” and another “Trump supporter” literally hump a television set. Broad City shows the two main characters getting run over by a “Trump bus,” or a bus with Trump’s face on it. Rather than creating original content, these 16 shows go out of their way to date their plots with this war on Trump.

Politics is no stranger to NBC’s liberal sketch comedy, but Trump is essentially the star of the show. Alec Baldwin has gained an Emmy and a recurring role on the show for his impersonation of the president. As Baldwin shared on Ellen, he was signed for the upcoming season to play Trump again.

Last season, Baldwin depicted Trump as making out with Melissa McCarthy’s Sean Spicer, not knowing where Afghanistan was, and calling Jared Kushner a “globalist cuck.” This season, with Baldwin as a regular, the attack will continue.

The seventh season of the FX horror series takes on the election in an unprecedented fashion. While Trump is not a character in the show, an image of him makes a regular appearance during the theme song. 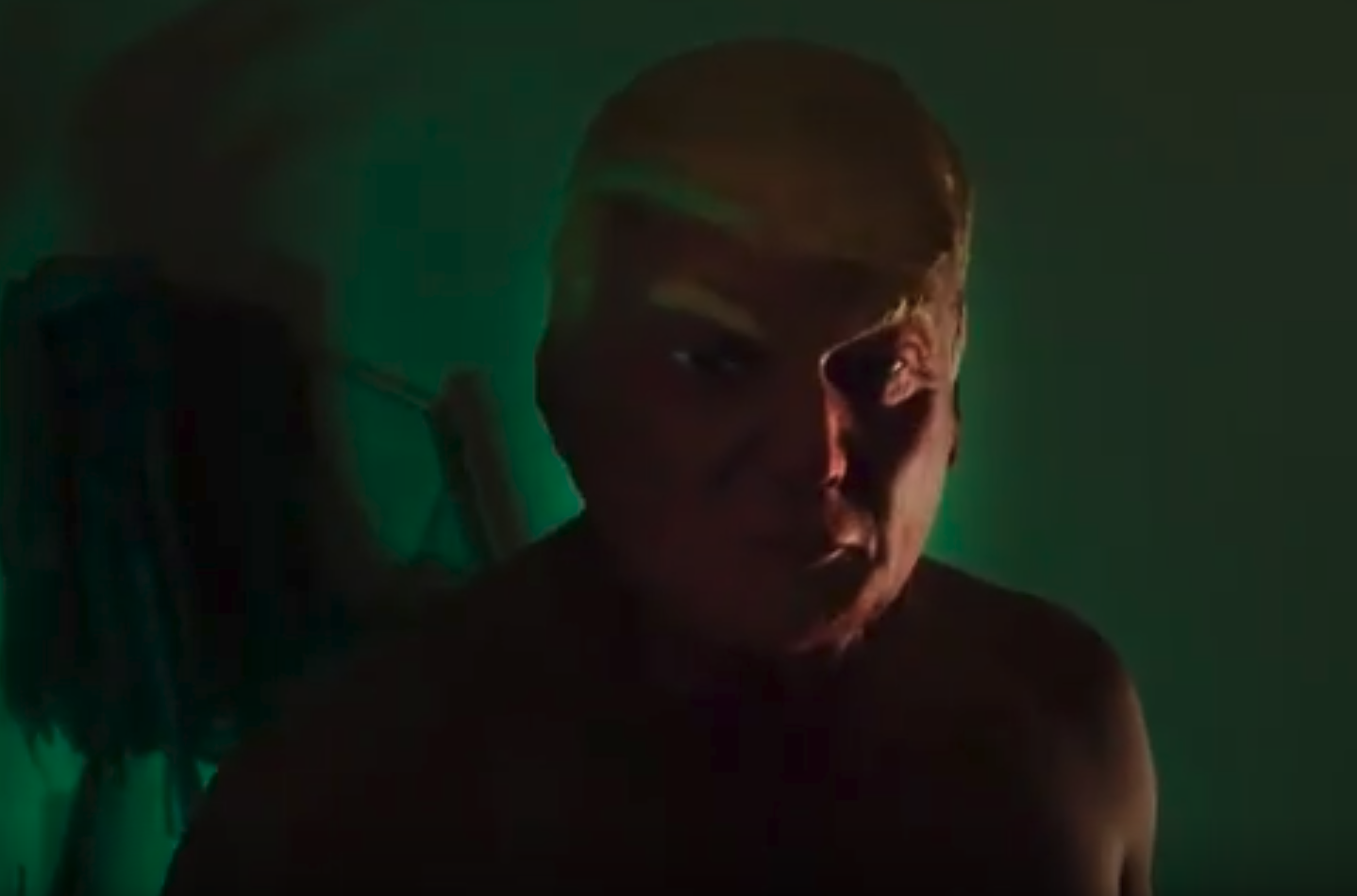 Trump is also the catalyst for the plot. The story begins with a liberal female having a screaming, hyperventilating meltdown as Trump wins the 2016 election. Meanwhile, a Trump supporter is depicting as humping his television screen. One of the other characters comments, “I hope everyone of those voters who decided it was a good time to cast a protest vote is happy when that … psycho gets us all killed.”

Showrunner Ryan Murphy has never tried to hide his strategies to wage cultural war through television, especially in his treatment of religion and sexuality, but this latest approach takes the conservative political scene and depicts it as hell.

South Park is an equal-opportunity offender but, even though the showrunners vehemently denied any attacks on Trump in the new season, the first two episodes do so explicitly. The first episode depicts Trump’s voter base as white supremacists with tiki torches, while the second episode centers around a song asking the president to put his phone down.

The lyrics to the song include the chorus: “Put it down. Don’t be on your phone while being president. Put it down, you might do something dumb and cause an accident. Let’s all agree, here today that if we’re leader of the U.S.A., we’ll put it down.” Hillary Clinton then steps up and agrees to take the pledge in a montage of people taking the pledge.

Comedy Central makes a living on mocking the conservative politics scene. Creator and co-star Ilana Glazer promised early in the summer of 2017 that she would “bleep out the name of Trump” in the show. While apparently she has kept that promise, it hasn’t prevented her from writing Trump into the show. In a recent episode, the two main characters are run over by a bus with a giant Trump poster on it, after expressing a desire to have a “throuple” with Barack and Michelle Obama.

The Opposition with Jordan Klepper

Yet again, Comedy Central jabs at Trump with the scripted weapon of satire, this time, with a spinoff from Trevor Noah’s The Daily Show (a late night show which claims to be ‘factually accurate.’) Jordan Klepper plays a conservative version of himself, much like Colbert did on the Colbert Report. Instead of basing his approach on people like Bill O’Reilly, Klepper is sourcing his act from “alt-right” figures such as Alex Jones and Steve Bannon. With ridiculous defenses of Trump meant to ridicule the president, this one fits right in with the rest of Comedy Central’s lineup. 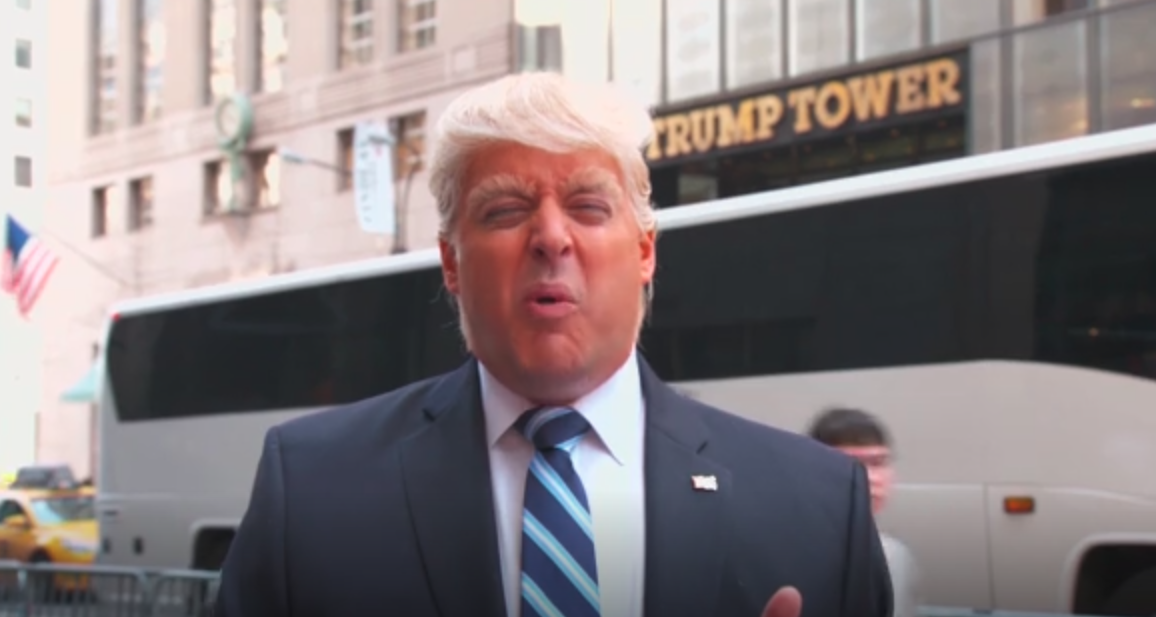 Trump impersonator Anthony Atamanuik is bringing new material to the Trump entertainment scene. In the past season, he has portrayed Trump as fighting with Melania, referring to her as “that bitch,” and has a segment where he deems things as “nice” or “not nice,” and calling the press a “hate group.”

In the line-up, this is Comedy Central’s fourth scripted show aimed at attacking Trump. While this list doesn’t include the unscripted shows, Comedy Central clearly has decided to work the Trump-hate angle for all it’s worth. Just look at The Daily Show and the Jim Jefferies Show.

The reboot of the popular NBC sitcom that, according to Vice President Joe Biden, made the American people comfortable with the idea of gay culture, is destined to be as “progressive and offensive as possible,” according to creator David Kohan. The cast reunited in 2016 to stump for Hillary.

In the campaign video, Megan Mullally’s Karen tells another character, “Honey, if you don't vote for Trumpy, there will be wars and monsoons and locusts and hordes of brown people pouring over our borders from every direction. I mean, it's one thing if you're sitting in the audience at 'Hamilton,' but do you really want to see those people everywhere?”

Showrunner Michael Chernuchin has made it infinitely clear the 19th season of NBC’s classic show will be divisive. In an interview with Entertainment Weekly, he stated that the new season will tackle Charlottesville.

He said, “we do rip from current headlines, so if the headlines have to do with politics, we’ll do it. With what just happened in Charlottesville, you can bet your bottom dollar that we’ll do that. I mean, we like to do that, we don’t want to take a stand on any political point of view, but we like to present the issues. What I want is at the end of a show half the people to stand up and cheer and the other half to throw their shoes at the television. I want controversy.”

While this series is the first in the Star Trek canon to accept atheist principles, it also finds time to poke at Trump specifically through the Klingons. Executive producer Aaron Harberts told Rolling Stone that the “Trump phenomenon was front and center in our minds” in creating the new series.

A Klingon leader, one of the villains of the show, tries to position his people against Starfleet’s mission for multiculturalism. His slogan, “Remain Klingon,” is interpreted by Business Insider as “Make Klingons Great Again!”

The second season of the Amazon series starts out with a character attributing a character’s racism to the fact that Trump was elected. Vicky, a Vietnamese woman at a Civil War re-enactment, lashes out at someone else, “You did nothing to stop a racist bully from becoming president?”

The episode also includes an idea to move to New Zealand to escape Trump. In an interview with the Hollywood Reporter, Tig Notaro, the creator and star of the show, said the show would address Trump, racism, and controversial sexuality because “it still felt like it would be irresponsible to not touch on issues that are going on and that have been going on, rather than just paint Mississippi and life as this beautiful picture always.”

The creator of this animated Netflix series told IndieWire shortly after the election that he was steering the show away from its previous mindset: “exploring the small hypocrisies of rich liberals” Instead, “I’m not in the mood to poke fun at those kinds of people when there are real, real problems that we need to talk about.”

That was 10 months ago. Now, the preview for the new season begins with a character, Mr. Peanutbutter, running for governor. His posters are similar to President Obama’s campaign posters, and his slogan is decidedly aimed at politicians: “I am specifically on the side of the facts, and also on the side of feelings.” The first episode addresses the gun control debate.

Shonda Rhimes’ controversial, political ABC drama will take on Trump in the 7th and final season. The main character, Olivia Pope, follows a “Trump-like power arc,” according to Refinery29. Variety told a story of how in Olivia’s case, “absolute power corrupts absolutely.”

In previous seasons, Scandal has portrayed conservatives as deeply corrupt businessmen and politicians who don’t believe in education or racial equality. There was even a character meant to parallel Trump, a misogynistic billionaire who grumbled about “freeloading illegals.”

In a twist allegedly meant to tickle the liberal agenda’s funnybone, ABC’s new comedy follows an “African American Donald Trump.” The plot centers around a young, unknown rapper who runs for mayor of his town and accidentally wins. Needless to say, he doesn’t do a very good job being mayor.

Huffington Post reported back in June that the ABC series would feature a “Trump-like character” in the role of a villain who is very concerned about refugee immigrants coming into his territory. This move seems to imitate Star Trek: Discovery, as yet again, Trump is portrayed as the villain whom the heroes will overcome in the plot.

This is the third season of the Hulu series, and among the long list of political positions taken in the series, the season so far has displayed Vice President Pence’s seal as a swastika, a character flaunting a “Make America Straight Again” baseball cap, and several swipes at Trump and conservatives throughout the season.

The Freeform drama spent an entire episode this season mocking Trump, with characters whining about him leaving New York City and going to live in Mar-a-Lago, and a character who joined a loud anti-Trump protest.

This list does not include the part of Hollywood’s war that remains unscripted, nor does it include future unscheduled projects that have been announced. Chelsea Handler’s Netflix series Chelsea shows just how far networks are willing to go to make sure their position on Trump is loud and clear. Late night talk shows are some of the cannons behind the entertainment’s rapid-fire attack on Trump, with show hosts like John Oliver telling audiences that “Trump rubs his boner on the flag” and Stephen Colbert cracking homosexual jokes about Trump and Putin.

War has been waged. The die is cast. Entertainment has sacrificed audiences, creativity, and originality to join the liberal agenda.