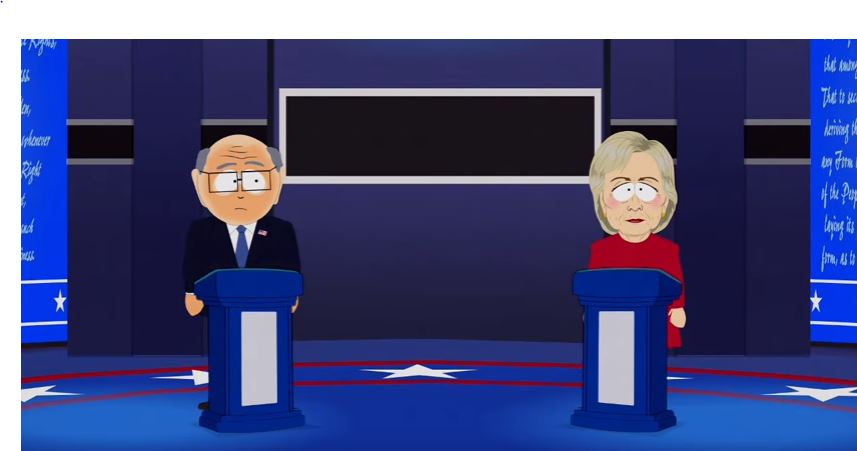 The Tonight Show host once treated Donald Trump like a guest on his late night program. Because … that’s what the reality show host was.

That sent reporters into a tizzy. How dare you normalize Trump, they cried. For weeks the press pounded Fallon for not just that indecency but for the dearth of Trump jokes in his monologues.

Which is precisely what you see on the majority of late night comedy shows.

Now, the press is training its guns on Trey Parker and Matt Stone. The duo behind Comedy Central’s long-running South Park incorporated plenty of Trump material in their most recent season.

That’s partly why they decided to try something different for season 21, coming next month.

Everyone else is unleashing Trump jokes, Parker and Stone argued. And the President himself is often so over the top it makes satire knottier. So the next batch of South Park episodes will mostly avoid Trump-related humor.

You might as well whisper, “release the hounds” to the press.

The Daily Beast attacked first, questioning Parker and Stone for not joining the Trump lynch mob.

Co-creator Trey Parker says he doesn’t want ‘South Park’ to become CNN. But what is the show’s responsibility in the age of Trump?

Sounds like there’s only one “right” answer to that question. Keeping hitting Trump harder. Yet the writer bemoaned the show might hit skewer different subjects.

Yet just as they used 2004’s Team America: World Police to skewer Hollywood liberals like Sean Penn and Matt Damon, it’s easier to imagine them going after the Women’s March and Trump’s CNN critics than it is to see them targeting the president directly.

The AV Club, an aggressively liberal outlet, hits harder. The site attacks South Park as the source for modern-day trolls. Then it bares its teeth against the Trump-free “South Park” episodes to come.

All of which makes Parker and Stone’s recent declaration to lay off Trump in the coming 21st season a real disappointment at best, cowardice at worst. The duo is, of course, under no obligation to tackle politics—or anything else they don’t want to, for that matter. They’re also right that mocking Trump is both redundant and “boring,” and also that everyone does it. For two dyed-in-the-wool contrarians, Trump comedy feels every bit as bland, lifeless, and sitcom-safe as an episode of, say, Veronica’s Closet. Furthermore, Parker’s complaints of the show just “becoming CNN now” and not wanting to spend every week endlessly restacking the sloppy Jenga pile of Trump-related outrage is completely understandable. Believe me, I get it.

That said: Man, what a cop out.

It’s the classic, “Yeah, but still…” defense. It fails every time.

Philly.com became the most recent media outlet to shame South Park into repeating the same Trump lines heard across the TV landscape. The headline kicks off the tone: “20 years later, does America still need South Park?”

…its perceived role as satirical arbiter of modern morality feels increasingly hollow — as though America doesn’t need South Park as it once did, or at least not in the way its creators are talking about tackling the 21st season. Like seemingly everything else these days, it’s because of President Trump….

To now ignore or significantly reduce the emphasis on Trump after a strong initial focus on him seems like an abdication of the responsibility the show has earned for itself as comedic chronicler of pop culture.

So there you have it. One comedy show … one! … decides there’s nothing more to mock about President Trump and the knives come out.

Let’s not kid ourselves. These think pieces wouldn’t exist were it not for the creators’ decision to pull back on Trump material. Here’s betting we haven’t seen the last chin stroke column saying the show’s time has come.

It’s likely something these reporters have wanted to write for some time. The show regularly mocks the Left and the Right. The former is simply not acceptable any more. Comedy must hit one side, lest it reveal the hypocrisies of the modern liberal.

Why, it’s almost like there’s an entrenched liberal media bias that won’t even let an elite show spare us from more Trump gags.