'Scandal' Creates Its Own Trump-Like Character

After introducing a candidate who looks like Marco Rubio but sounds like Bernie Sanders, ABC's Scandal now has its Trump lookalike candidate, a misogynistic billionaire businessman who rants about "freeloading illegals."

Hollis Doyle (Gregg Henry) is a rich oilman who had been involved many seasons ago in helping fix the election for President Fitzgerald Grant. Hollis used to be the show's stereotypical southern, conservative, good ole boy, but now they've found a way to repurpose him.

In the episode "I See You," he reappears under the guise of offering the Republican presidential candidate who will promise to get rid of the EPA a half a billion dollar donation. He immediately lays on the sleaze asking, "You gonna put out for me, Mellie Grant, or are we just gonna rub jeans together and leave here frustrated?" When she refuses him, he says, "Well, I guess I'll have to go talk to that other little cupcake, see how far up her skirt she's willing to let me go." Gross!

By the end of the episode, Hollis has stolen Mellie's campaign strategy and announced his own run for president, all while managing to look and sound a heckuva lot like Trump.

Hollis: I would like to officially announce that I am throwing my hat in the ring and running for president of the greatest country on God's green Earth, the United States of America! [ Cheers and applause ] You know -- You know why I'm announcing at my old elementary school?

Hollis: Because you want to end racism? You want to end poverty? Then this is the place to start, so we all can embrace America's tomorrow!

Mellie: He stole my platform, my slogan, my tag line, word for freaking word!

Hollis: These kids are gonna have to work hard. No shortcuts. And if you're some pesky little border-crosser... Sad, little refugee begging for a handout... You will not be welcome! No, sir! This is America's tomorrow, not yours!

Mellie: You slimy, slithering, hell-raised son of a whore.

After he announces, another candidate panics, complaining that "Hollis is gonna make a circus of this campaign," but is told, "He's a joke. No one will take him seriously. I assure you he's not gonna be a problem." Gee, that sounds familiar, too. That's what they've been saying about Trump for almost a year. But something tells me Hollis won't last as long, he'll get the satisfying comeuppance people have been waiting for Trump to get. 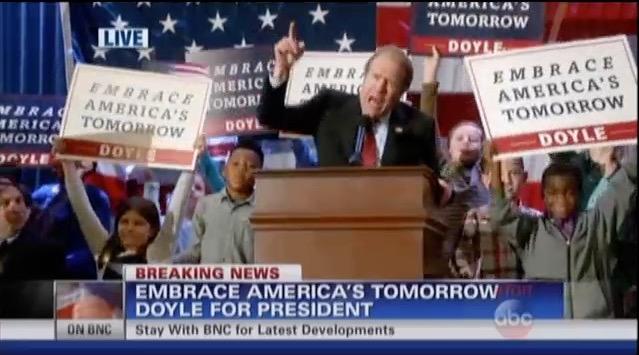 Scandal creator Shonda Rhimes is a dyed-in-the-wool liberal. This cycle she is backing Hillary Clinton, who stopped by the set of Scandal last month. Shondaland's leading ladies also cut a campaign ad for Hillary that aired last week.