Whenever liberal snowflakes get upset, you can be sure that Lena Dunham is somehow involved. In her activism for political correctness, she criticized an entire company -- to her 5.5 million followers -- for allowing their employees the privilege of conversation.

The new cast member of American Horror Story boarded American Airlines on August 3 and was triggered, not by the delays or the wrinkled boarding pass, but by the “transphobic talk” she overheard from two flight attendants. (It’s easier to hear things up in First Class). This must have been a truly horrible experience since not only did she send in her complaint to American Airlines via text, but she also posted her grievances on Twitter. Hearing the supposed hate speech was, for her, “the worst part of the night.” 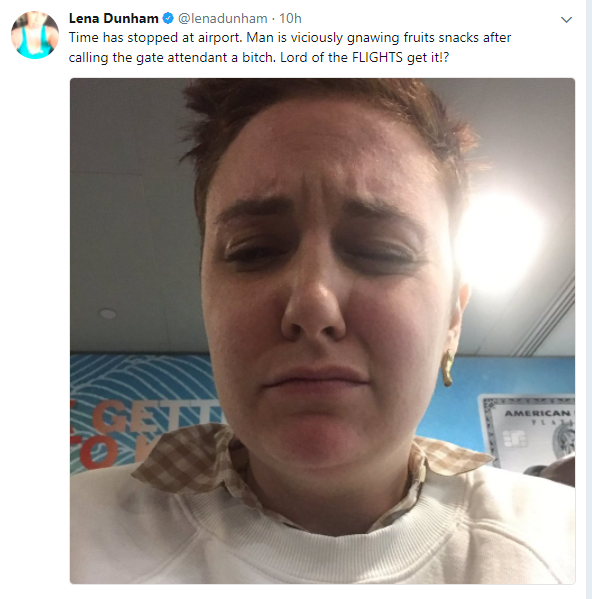 In a text to the airline that was later tweeted out on her profile, she wrote: “I heard 2 female attendants walking talking about how trans kids are a trend they’d never accept a trans child and transness is gross. I think it reflects badly on uniformed employees of your company to have that kind of dialogue going on. . . awareness starts at home but jobs can set standards of practice.”

To be clear: the attendants were not speaking to the passengers, they were not refusing service to anyone, and they were not pushing their beliefs on anyone. But to Lena Dunham, someone who has in the past asked people to stop “preventing real discourse,” merely speaking about something in private is unprofessional if you are on the job. Bad thinking must be stamped out. And therefore, the whole airline should suffer. 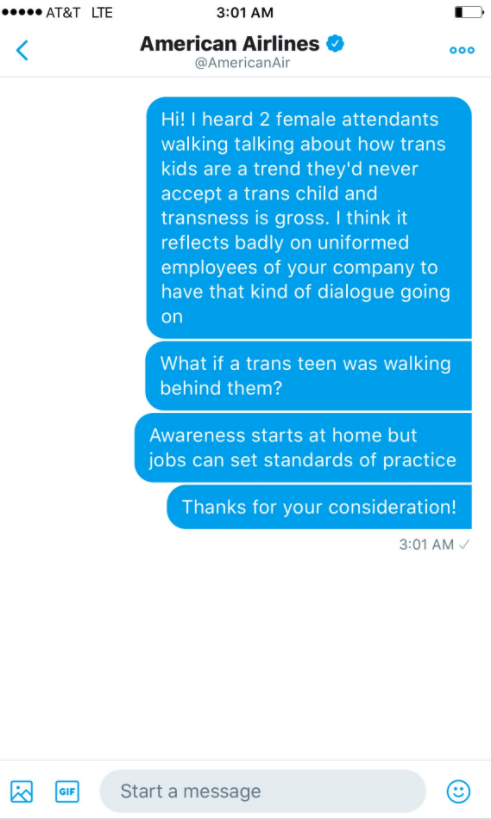 The International Business Times linked this supposed ‘incident’ to other more disturbing incidents that happened on American Airlines, including indecent exposure. It also found a way to link Lena’s complaints to Trump’s transgender ban in the military.

The actress admonished the company, saying that “at this moment in history we should be teaching our employees about love and inclusivity.” Kumbaya, Lena. Maybe you should have told that to the attendants yourself, since you were so concerned.