Although Lena Dunham is no fan of Kellyanne Conway, she’s not here for digs at the presidential counselor’s appearance.

In a series of tweets posted Sunday morning, the liberal writer/producer expressed the view that commenting on women’s looks doesn’t advance the conversation.

“Insulting another woman’s appearance, even one you ideologically disdain, isn’t moving the needle forward,” she noted. “Seems crazy to have to explain…”

“…I’m no saint but I don’t, for example, get sassy about Kellyanne Conway’s looks,” Dunham continued. “It muddies the waters and prevents real discourse.”

“Or are we all just pretending to want real discourse?” she concluded.

It’s an important question to ask. And Dunham, a noted critic of body-shaming and appearance-based discrimination, should be commended for extending her defense to a conservative with whom she disagrees.

But as Dunham’s social media fans are predominantly liberal women, her tweets make the point that feminists can be quite hypocritical. Progressive news sites like Huffington Post, Bustle and Refinery29, and women’s magazines like Cosmo and Teen Vogue, frequently run pieces condemning appearance-based and sexist discrimination. But few, for example, came to Conway’s defense when SNL lampooned her as violent and hyper-sexualized in a sketch parodying Fatal Attraction.

And while appearance-based attacks are generally aimed at women, they are not a completely sexist issue. GOP leaders, including Sen. Ted Cruz (R-TX) and Sen. Mitch McConnell (R-KY), have been the butt of attacks from liberals like Full Frontal host Samantha Bee. The President, too, is routinely lampooned for his size, his skin and his hair, among other features.

Although some writers have noted this hypocrisy, few have called out the liberal community for volubly insulting Donald Trump. Celebrities and late night hosts have been particularly vile in their commentary.

In a recent rant against the President, Stephen Colbert declared: “You’re not the POTUS—you’re the BLOTUS. You’re the glutton with the button. You’re a regular ‘Gorge’ Washington.” 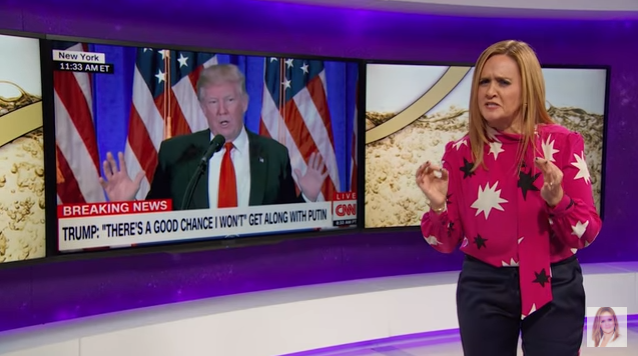 Slate even ran an article titled “Here’s Everything Samantha Bee Has Called Donald Trump on Full Frontal” – a list that included such names as “Big hairy orange villain” and “Melting hunk of uninformed apricot Jell-O.” But when TBS, the network that runs Full Frontal, tweeted a video comparing Clinton’s laugh to that of a hyena, Bee tweeted back “Delete your account.”

And while a May 12 story in the Washington Post's commuter paper The Express was accurate in noting that “Trump and [Rosie] O’Donnell have publicly feuded in the past, with Trump making comments about her looks,” the author failed to mention that O’Donnell also criticized Trump’s appearance. Among other epithets, she has called him a “slimy unethical orange blob.”

Ultimately, attacking a political opponent’s looks is a low and logically fallacious form of debate. And the excuse “He/she did it first!” certainly doesn’t hold much water.