What’s more fitting: that Lena Dunham should be on a horror show, or that said show should become unwatchably political? Dunham is set to join the cast of American Horror Story’s seventh season, which , according to showrunner Ryan Murphy, takes place during the 2016 Presidential election.

Ryan Murphy announced July 19, 2017 Lena Dunham would join the cast of American Horror Story. Murphy is “thrilled” to be working with “[his] talented friend Lena Dunham.” 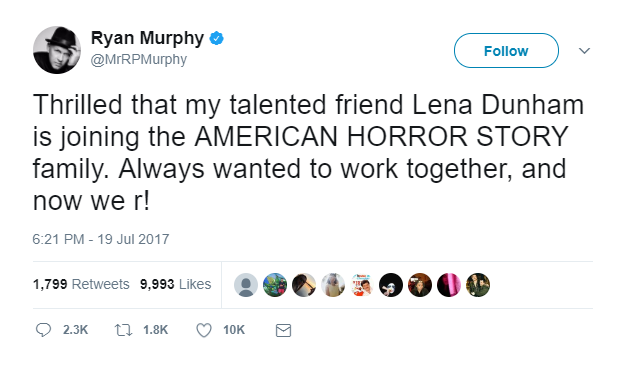 Dunham and Murphy are two peas in an ideological and aesthetic pod -- check-the-box cultural liberals. Dunham is infamous for being unable to keep her clothes on and presenting repulsive, graphic sex scenes during Girls. Murphy, the creator of Nip/Tuck, Glee, and Feud, has said his ambition is to one day air “a rear entry sex scene” on TV. Dunham stumped for Hillary Clinton, doing her best to demonize Republicans while fluffing her feminist savior. 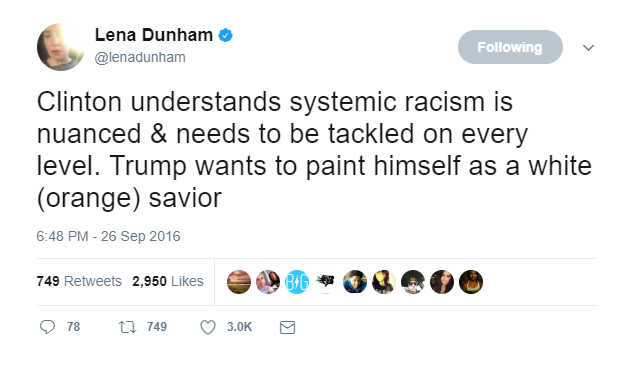 Dunham is also a comfortable member of the liberal upper crust. Cousin to the Tiffany family (yes, as in Tiffany and Co.) Dunham, after graduating from Oberlin College, starred in an unpaid web comedy, produced a $50,000 indie film, and wrote roles for the all-white cast in Girls. She’s now worth $12 million and yet considers herself “relatable” – the “voice of her generation.”

According to the Hollywood Reporter, Murphy asserts that the show’s seventh season will be bipartisan. February 2017, Murphy stated:

What I’m interested in doing is not just the obvious, single-minded point of view but rather express all sides of that equation. What needs to happen in our country now is for people to listen to each to each other – we may not always agree with each other and we may be horrified by what the other side is doing but we have to move toward understanding.

These are noble sentiments, but Murphy’s never been shy about larding his product with his agenda. During a recent Drama Actress Roundtable from The Hollywood Reporter, Nicole Kidman called Murphy a “trailblazer” for Hollywood’s response to the political climate. “We need that,” Kidman declared. Each actress at the Roundtable, which included Oprah Winfrey, Reese Witherspoon, Chrissy Metz, Elisabeth Moss, and Jessica Lange, who starred in Murphy’s Feud, nodded in agreement.

According to Lange, Murphy wanted Feud to highlight themes like “misogyny, sexism, and ageism” when asked about Hollywood’s response to Hillary Clinton losing the 2016 presidential election.

With Hollywood’s elite at the helm, it’s dubious American Horror Story viewers can trust the show’s creators to really “express all sides” fairly.