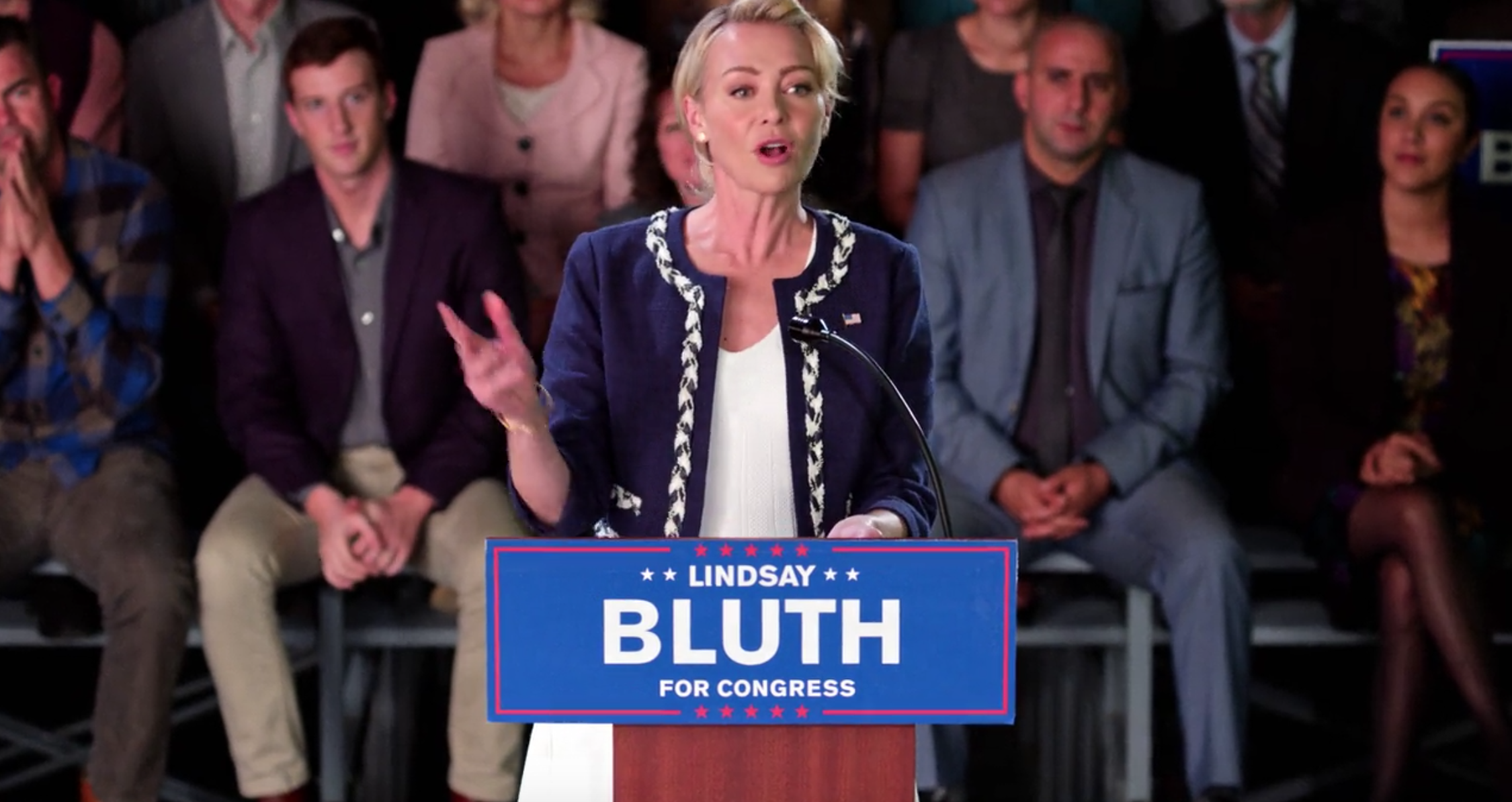 The first half of season 5 of Arrested Development took multiple swipes at President Trump, even though the show takes place before his presidency. Released on Netflix on May 29, the show inserts many of Trump’s statements made on the campaign trail into the show’s plot.

In the third episode, “Everyone Gets Atrophy,” Lindsay Bluth’s (Portia de Rossi) daughter/campaign manager Maeby (Alia Shawkat) tries to sabotage her mother’s campaign by feeding her offensive lines. However Maeby bemoans the fact that everything she makes her mother do has only given her a rise in the polls. “The more offensive it is, the more people get behind her,” Maeby laments.

One scene shows Lindsay on stage mocking a Wee Britain reporter with a speech problem, referencing the time Trump seemingly mocked journalist Serge Kovaleski. Lindsay is also caught on a hot mic saying, “I wouldn’t mind grabbing him by the tush,” alluding to lewd comments Trump made in 2005.

In case the subject of the mockery wasn't obvious enough, the show’s narrator adds, “Many of the offensive comments almost seem quaint by today’s standards.”

In another scene, while George Michael (Michael Cera) hangs out in Mexico, he has an awkward altercation with a Mexican Wetzel’s Pretzels employee who explains, “I’m probably grumpy because I was out late last night, raping and murdering,” referencing Trump’s 2015 comments about some Mexican illegal immigrants.

One episode earlier, “Self-Deportation,” a woman in Mexico helping people who were deported from the U.S. tells Maeby, “We are helping these people because nobody else will. They’ve been kicked out of the only country they’ve ever known for their whole lives because of the cruelty of your president—Barack Obama.” So at least the show doesn’t turn a blind eye to the record number of deportations that occurred under President Obama.

In the very last episode, “Premature Independence,” the show takes a jab at Fox News and its viewers. Maeby, who has been living in a retirement home posed as a 75-year-old woman, finally decides to leave. While explaining to George Michael that it’s okay to allow his dad to believe something that isn’t true, she adds, “Like how people think the world’s melting because people drive cars, or that Hillary should continue to roam free.” She then turns to the TV and says, “Good-bye Fox & Friends.” The camera pans to a concerned George Michael.

The last season, which aired in 2013, had George and Lucille Bluth advocating for a wall to be built between American and Mexico. This season has Lucille lamenting that Trump stole her idea. Actress Jessica Walter (who plays Lucille) explained that showrunner Mitch Hurwitz had to hold back on the Trump jokes. She offers, “It's too obvious now. And you know, it's almost as if our family, just by themselves, are the Trumps. You've got the two dysfunctional sons. You've got Portia as Ivanka. George and Lucille.”

People watch Arrested Development for the laughs, not for its political commentary. Unfortunately for viewers, what the show adds in politics, it loses in humor.