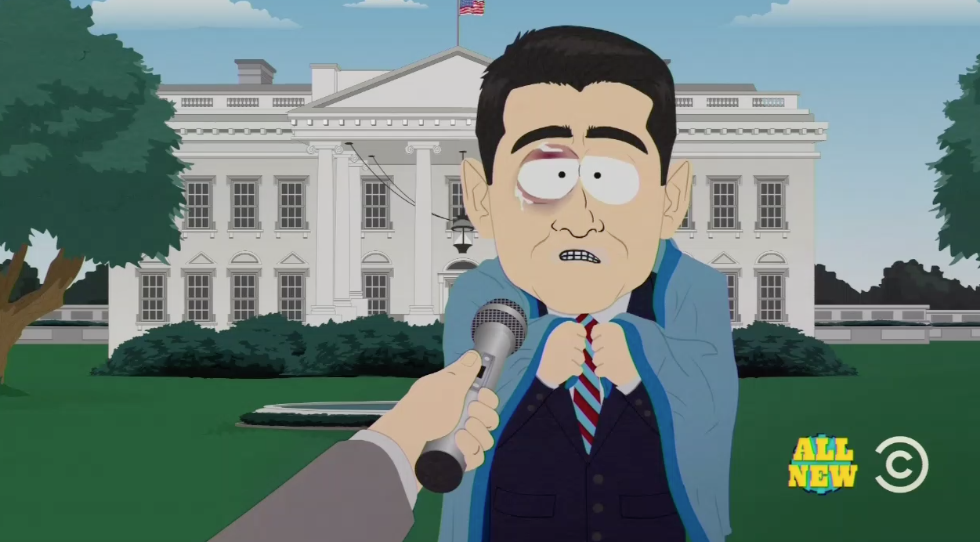 On the anniversary of President Trump’s election, Comedy Central's South Park not-so-subtly suggests Trump voters were wrong. Wednesday night’s episode, titled “Doubling Down,” has two parallel storylines – a girl who refuses to break up with a boyfriend who treats her horribly, and Senate Majority Leader Mitch McConnell, Vice-President Mike Pence, and House Speaker Paul Ryan dealing with a sex-crazed, racist, moronic president while still insisting to the media that he’s “doing great.”

In the first storyline, Heidi continues to date the emotionally abusive Eric despite reproaches from her friends and family. Kyle speculates that the reason Heidi refuses to break up with Eric is that she’s embarrassed to admit that everyone was right and she shouldn’t have dated him in the first place. He tells her friends, “You can't keep saying, ‘We told you so,’ because if you make her feel dumb, she just doubles down and tries to prove to herself that it wasn't dumb.”

Meanwhile, in the White House storyline, the South Park writers portray Republican politicians in a horrifically abusive relationship with the president. When McConnell, Ryan, and Pence learn that the president raped to death a “worker with ties to Russia,” the president tells them to “put a positive spin on it.” The three reply, “It's getting pretty hard to keep defending you. Maybe it's time we put our foot down.” In response, the president locks them in the Oval Office and rapes them. Later, a beaten up Paul Ryan appears on the TV to talk about how he’s “sticking by his president 100%.”

Reporter 1: Some concern over the President's competency again today. It was during a Middle East peace conference when the President referred to the people of Saudi Arabia as ‘a bunch of dirty sand Nigers.’ Though the comments seem divisive, Speaker of the House Paul Ryan says he's sticking by his President 100%.

Reporter 2: Speaker Ryan, it's the anniversary of the President being elected. How do you think he's doing?

Ryan: Well, what do you mean? He's great. We're doing great. A lot of people judge him and just see the negative. People don't know how great the President can be behind closed doors. They don't get to see all his good qualities.

Reporter: Uh-huh. And is that semen on your black eye?

Similarly, in Heidi and Eric’s abusive relationship, Heidi insists, “Well, you know he – he actually had some good qualities too,” and “You know, you don't know what Eric's like when we're alone, okay?”

By the end of the episode, the South Park writers patronize Trump voters by putting words in their mouths through Heidi: “I was in a really bad place. I felt pushed away by society. Then this guy came along who told me all the things I wanted to hear, and I just went with it. Does that make me a bad person?” Kyle tells her, “No, Heidi. Good people make bad decisions every day,” to which she responds, “I've been defending him for so long. I don't know how I'm gonna face people if I finally give up."

I imagine the writers of South Park are proud of themselves for their insight that mocking Trump supporters only makes them “double down.” But Trump voters probably prefer SNL’s playground level mockery to the arrogant condescension of being told that “good people make bad decisions every day.”