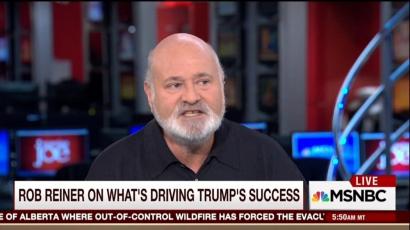 Like Hillary Clinton, Rob Reiner would toss an awful lot of Americans into a “basket of deplorables." Or in Meathead’s case a bunker of Archies.

In an interview published on September 8, when asked by The Hollywood Reporter if Archie Bunker, a racist/sexist/xenophobic character from the 1970s sitcom All in the Family, would be a Donald Trump supporter. As if you couldn’t guess, Reiner responded, “Absolutely, 100 percent. Trump is from Queens. Archie is born and raised in Queens. They have the same kind of mentality. Archie was a bigot, and the things that come out of Trump’s mouth are totally bigoted.”

Amid discussing his career and father, lefty Hollywood legend Carl Reiner, Reiner had the audacity to complain about the abuse he receives from Trump supporters (they call him “Meathead,” after all – his character on All in the Family), before demonstrating his own disdain for the white, working class in a tirade reminiscent of Clinton’s “basket of deplorables” comment:

“Look at the demographics: It’s mostly white males who don’t have college degrees. And, you know, that’s Archie.” So if you’re a white male without a college degree, you’re a racist, sexist, xenophobe?

He continued, “Then there’s also a very serious strain of racism that runs through his followers. And that’s a kind of disturbing thing, and I don’t think you ever reach those people.” What a surprise, another liberal accusing people of racism simply for not agreeing with him.

Not only would Clinton be proud, but President Obama too. Reiner furthered his argument, adding, “It’s very disturbing because a lot of these racist ideas have kind of been dormant for a while, and he's given voice to them — he's kind of unearthed it. And the thing that's most disturbing is to discover that there's so many people that still hold those views. If it isn't overt racism, it's this kind of a desperate attempt at holding on to some version of America that they think was there once.” His statement, reeking of liberal elitism, sounds similar to Obama’s remark about “bitter,” small town Americans who “cling to guns or religion…”

Reiner went on to say, “They’re really threatened by our diversity, and what’s so great about the experiment of democracy is that it celebrates diversity and diversity is what makes it strong.” Of course, it’s diversity of skin color or language or sex preference, Reiner cares about. When do you suppose was the last time Reiner (or anybody in Hollywood) had contact with an actual conservative?

Earlier, the celebrity congratulated himself for calling out Trump in response to the candidate’s statement, “I regret having hurt people.” Reiner bravely tweeted in response, “Media must press Trump. Who does he regret hurting? Mexicans, Muslims, Blacks, Gays, the Khans, women, the disabled, Jews? Who exactly?" I’m sure Reiner will be tweeting something similar soon in response to Clinton’s half-apology for her “basket of deplorables” comment, right?