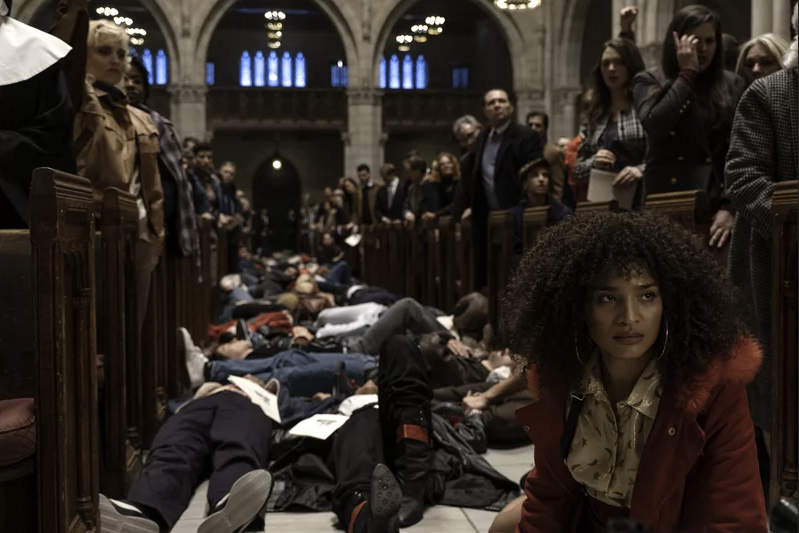 Tuesday, June 11 marked the beginning of another season of Pose on FX and the flood of LGBTQ+ activism that comes with it. By now, the constants cries about homophobia and racism should come as no surprise to anyone who is familiar with this show based in New York in the late '80s and early '90s.

It has become less of a question of “if” they will propagate more liberal politics, and more of a question of who or what they will aim their bias towards. Last season we saw this bias aimed at Donald Trump and Ronald Reagan, but what about this season? The Catholic Church.

In season 2 episode 1, "Acting Up," Judy (Sandra Bernard) attends a protest to fight for the rights of people with AIDS. The woman who seems to be leading the protest gives a rallying speech that foments hatred against the Catholic Church.

Woman: Listen up, folks. Last week's fund-raiser brought in $650,000. And... And now that we finally have the cash to meet our momentum, this Sunday's protest up at St. Patrick's Cathedral is an even more crucial step in starting a global conversation around HIV and AIDS. The Catholic Church has spent millions of dollars putting the false message into the world that condoms don't work and that abstinence is the only way to fight HIV. That is a lie. -(Booing) And that is morally wrong. So, we're staging a die-in in the middle of that congregation as a peaceful protest against the annihilation of our community! Yes! Cardinal John O'Connor has said, "Good morality is good medicine." He might as well say, "Let them get AIDS." And it's not just the board of education or the city council that Cardinal O'Connor is influencing, no. He has a direct line to the Pope himself. We will not allow his racist, sexist, homophobic ideologies to affect the health of every single person on this planet!

So it is immoral to encourage abstinence and say that condoms don’t always work, which happens to be true? Somehow I don’t think liberals, who also support abortion, are very qualified to speak about morality. It’s also worth mentioning that giving a solution to a problem that one does not like, doesn’t equate to wanting them to die. Leave it to liberals to be over dramatic in acting up.