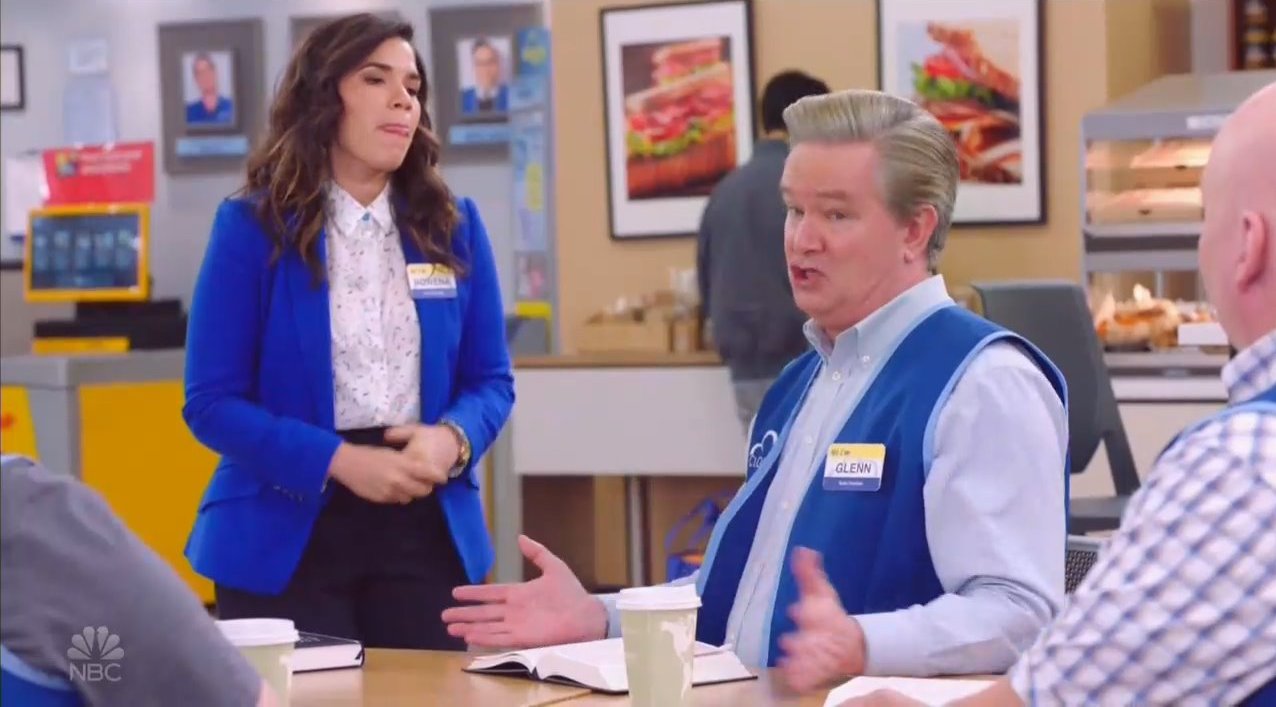 Thursday night, NBC's Superstore aired a new episode, “Cloud Green,” and as you can guess from the title, there was talk about saving the planet and taking "action against climate change!" As obnoxious as the climate agenda is, what stood out more about this episode is the agenda they wouldn’t allow to be spread in the workplace.

In another storyline during the episode, Glenn (Mark McKinney), who is not yet used to being an employee under Amy (America Ferrera) instead of the manager, invites his pastor to hand out plants at the store without asking Amy’s permission first. Amy is slightly frustrated, but lets it go telling Glenn to ask her next time.

However, Amy soon finds out the pastor is doing much more than giving away plants—he turns out to be selling his book and sharing the Gospel. When Amy kicks him out because she doesn’t “… think that corporate is going to be too excited to hear that a Christian pastor was doing a book reading in the store,” Dina (Lauren Ash) assures the African American Pastor it’s not because he’s black, but rather because he’s sharing his religion, as if that's so much better. "All right, just so you all know, this was not a race thing. We're kicking him out for practicing his religion."

Amy refutes this saying it has nothing to do with his religion, but rather with him not having her permission. A later scene shows this couldn’t be further from the truth when Glenn wants to do a Bible study during his break.

Glenn: And Jesus put forth his hand and the leper was cured. So what miracles have you experienced in your lives? And please, nobody say their kids, okay?

Sandra: One time, I saw Lily Tomlin in an airport. I mean, it looked like her. I don't know.

Glenn: Oh, nothing. Just having a little employee Bible study. Would you care to join us? You could probably use some guidance.

Amy: But, uh, no. Unfortunately, there's no religious gatherings allowed during company time, so everyone has to get back to work.

Glenn: Wow. So first Amy throws a man of the cloth out of the store, and now we're not even allowed to talk about the Bible.

Glenn: Shut up, Earl. This isn't about that.

Amy: Okay. Glenn, I know you're having some issues with not being in charge anymore, and so you're lashing out at me. And I'm trying to be very cool about it, but I can't keep doing that because it makes me look bad, so I am asking you politely. Please knock it off. Okay?

Glenn: Fine. But I have three minutes left on my break. Am I allowed to talk about anything?

Amy: Yes. Obviously you can talk.

Amy: Knock yourself out.

Glenn: Because John Cusack died for our sins, which is why we worship John Cusack, King of the Jews.

Later, Amy decides to write Glenn up for "Outward display of religion." Interestingly enough, it just happens to be Christianity, because presumably if he got in trouble for displaying any other religion the writers of the show would have been seen as intolerant.