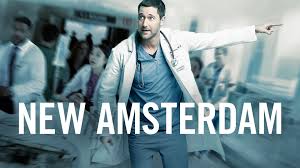 On Tuesday night, the writers of New Amsterdam rolled out an old liberal agenda and confirmed our suspicions that they are desperately lacking in creativity. There's no doubt the hit drama is aiming to be the Grey’s Anatomy of NBC. Not only are the writers looking to get in on the medical drama scene so many Grey’s fans love, it looks like they’re also aiming to be as liberal as show creator Shonda Rhimes, with a whole episode pushing the Black Lives Matter agenda.

In the episode, titled “Cavitation,” two young African American teens come into the ER suffering from gunshot wounds from the same bullet said to have ripped through them both. The real kicker comes when we discover that this was likely a “police-related incident.” (If this plot seems familiar it's probably because something similar happened on a Grey’s Anatomy episode not too long ago.)

We never hear anything about the circumstances that led to the shooting. The police side isn't told at all, in fact, Medical Director Max Goodwin (Ryan Eggold) avoids taking the police chief's calls. Meanwhile, a journalist (Jose Zuniga as Louis "Lou" Navarro) following Max for a profile piece lets his liberal bias show.

Max: Well, I'll ignore that call, too, and then eventually, he'll stop dialing.

Doctor: He doesn't dial his own phone.

Lou: You normally in the habit of blowing off the Chief of Police?

Max: Oh, the police department has its own agenda. But my agenda and the agenda of my hospital is to save lives. Plain and simple.

Lou: Yeah, you realize this is probably a police-related shooting, right?

Max: That information, while tragic and upsetting, doesn't matter in here.

Lou: Wait, doesn't matter? More than 700 people have been shot and killed by the police just this year.

The agenda doesn’t stop there, though. For the rest of the episode we see several outraged characters accusing the police of racism and ranting about guns.

One of the more notable outbursts comes from one of the wounded boys' aunts.

Ms. Tewkes: Malik has been well-loved. And extremely well cared for. Is that what you need to hear?

Ms. Tewkes: Church choir. After-school care. Year-round sports. I've done everything in my power to keep him safe. To keep him from dying like his parents. This foolishness still found him.

Ms. Tewkes: If you really wanna help, then stop the police from shooting black boys trying to get to school on time. And get every bullet out of this city. So my nephew has a chance of seeing his 21st birthday. Can you do that, Mr. Trauma Support Man?

And, of course, the doctors are in on it, too. Two black doctors, Dr. Helen Sharpe (Freema Agyeman) from England and Dr. Floyd Reynolds (Jocko Sims) from the U.S., discuss "the dangers of walking around in brown skin."

Dr. Sharpe: That's something I will never understand about this country.

Dr. Reynolds: The dangers of walking around in brown skin?

Dr. Sharpe: I never really gave it much thought until I moved here. Now I can't not think about it.

Dr. Sharpe: But this is no way to live.

Dr. Reynolds: No. It's not. Yet we do. You know? So if it takes a million camera phones and protests and knees to make that point, so be it.

The issue is, statistics tell a very different story. Data shows that the majority of people shot and killed by police in the US in the last year were actually white, contrary to how the media portrays it. There are a lot of things to one could emulate from Grey’s Anatomy to achieve success, but its uninformed liberal agenda isn’t one of them. Please take note, New Amsterdam.