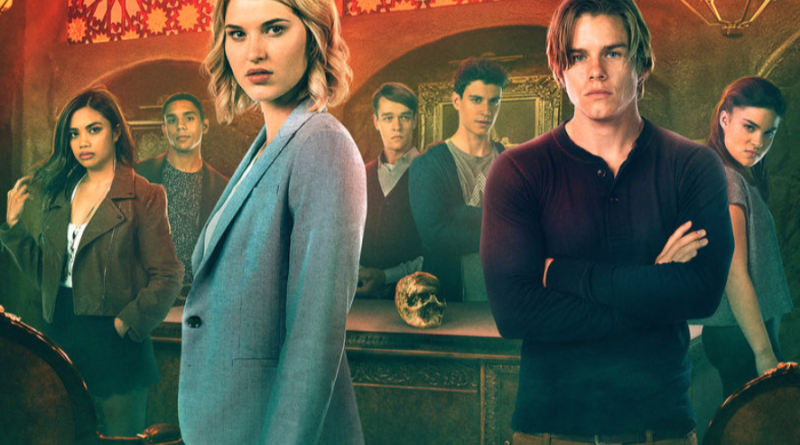 There were times when watching the new Netflix teen fantasy series The Order I genuinely wondered if they were intending for the show to sound satirical. In the first half of the first episode, viewers were treated to a reference to "one percenter parasites," new students at Belgrave College, where the show takes place, were directed to "male, female, and non-binary bathrooms" and given "how not to rape" pamphlets, and former president George W. Bush was compared to Mussolini. Unfortunately, I think this is the state of young adult content in 2019.

The show follows Jack Morton (Jake Manley) in his first year at the prestigious Belgrave College. His mother has long since passed away and Jack has been raised by his grandfather Peter Morton (Matt Frewer), with whom he has created a plan to go to Belgrave and join the dark magic secret society The Hermetic Order of the Blue Rose. Once in the secret society, he can avenge his mother's death.

So here are two college students classifying people into good versus bad, and they put Michelle Obama, Warren Buffet and Oprah (the latter two of which have become billionaires through capitalism) into the "good" category, while "bad" consists of an evil dictator responsible for the deaths of nearly 2,000 political opponents alone and President George W. Bush. The show clearly suggests that the two are on the same level, and one has to wonder if today's education system will do anything to convince them otherwise.

While that's the most egregious example of the show, there were others that were almost funny. Jack finds himself brought into the Knights of St. Christopher, a second secret society, this one of werewolves (yes, he's a werewolf now) that fights dark magic. While it's initially referred to as a brotherhood, feminist werewolf Lillith (Devory Jacobs) reminds the other three wolves (all men), that they are in fact a "gender-neutral collective." Talk of a brotherhood is no longer allowed.

In a later episode, Jack is accused of murdering one teacher and sexually harassing another. The Hermetic Order of the Blue Rose finds murder to be forgivable, but sends him to a class on sexual harassment, because that is unforgivable. You can see why it was hard to tell what was supposed to be taken seriously in The Order. It so often veered into absolute absurdity that it was difficult to know.

We can only hope the teenagers watching it are educated enough to know it's stupid to compare George W. Bush to Mussolini.

All 10 episodes of the first season of The Order were released on Netflix on March 7.