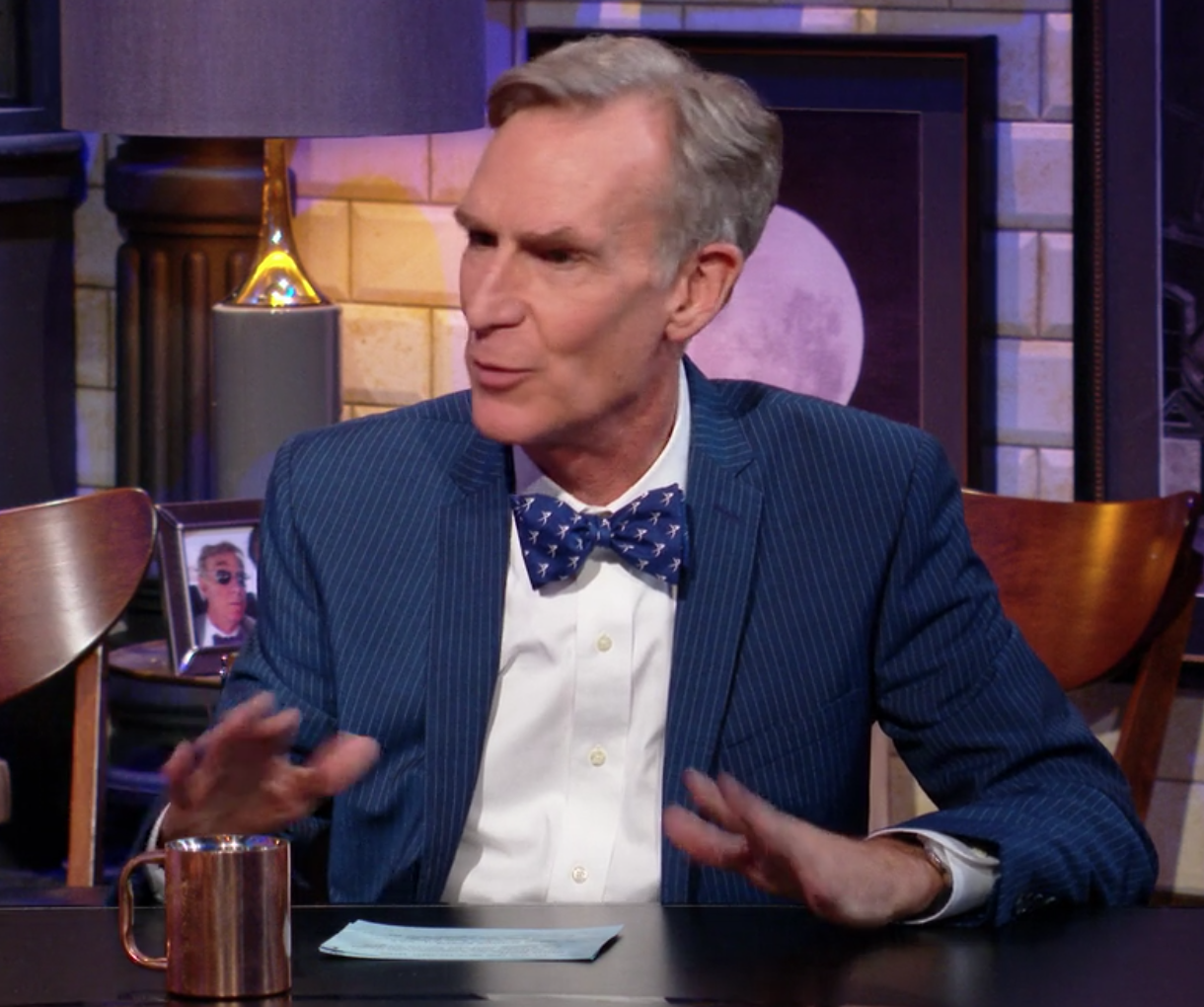 In the third season of Bill Nye's not-so-humbly titled Netflix series Bill Nye Saves the World, there are an unusually large number of shots taken at religion. Even more awkward are the clumsy attempts at what seems to be outreach to people of faith, they are almost painful to watch they're so bad.

At one point he shows us a picture of himself serving as an altar boy as a child as if to say, "See! I'm like you!" but that doesn't mean he was ever actually a believer. In episode five, "Evolution: A Fact of Life."  he brings out an ex-priest to talk to the audience. Why did he leave the priesthood? To become a scientist. That's about the least helpful thing he could have done, and he doesn't see that.

The most egregious comment is when "comedian" Maria Bamford pops up in episode three, "The Addiction Episode," and says that it's not so bad attending 12-step programs for recovery from addiction even though she's an atheist and these groups talk about God and refer to "a higher power." How? "I choose just to change those words to 'Neil deGrasse Tyson.'" Gross.

Maria: I am an atheist. So, sometimes people have a problem with these 12-step support groups especially because there's a lot of mention of a spiritual world. You know, God, "higher power" is used. I choose just to change those words to "Neil deGrasse Tyson."
[Bill Nye and Audience: Laughing and Cheering]
Bill: He's a friend of mine.
Maria: Yeah
Bill: He'll be flattered.

No doubt Tyson, who bashed Christianity on his own science show, would be flattered. But the idea that someone would think some other regular non-deity was raised above the rest of us seems fairly creepy to me. The fact that the audience laughed and cheered was a fairly good indication that they were comfortable with a human lording over us. Then again, I believe that the higher power is God, so it sounds like this crowd doesn't really care what I think.

The thing Nye doesn't seem to realize is that people of faith aren't anti-science, so we don't need his bizarre lectures. Rather, we use science as a way to explain and make sense of what God has made. The two go together perfectly well. He doesn't even understand faith itself. In fact, in episode six, "What is Your Pet Really Thinking?", he asks specialists in animal behavior if animals can also have religion because, it seems to him, "What religion really gives people is community. People worship together, they hang out together, they look out for each other with this framework." This is a guy who really doesn't get it.

Something else he doesn't get? Feminism. In the second episode "Surviving in a World Without Water," which is really just a climate change episode (they had to give it a slightly different name since he covered that in the very first episode of the first season.) In this episode, he paints global warming as a feminist issue. "The main thing we can do for climate change," Nye told a panel he was moderating, "is raise the standard of living for women and girls." Then, in the same episode, he shares a satirical video of a dystopian future without water where one woman is unable to fulfill her dream. Watch to see what her dream is.

Julie: Kristin Miller is your typical American girl. Like many of us, she suffers with a critical water shortage, but the way it affects her is a little different.
Kristin: You know, I'll be honest with you, it's difficult. You dream of following in the footsteps of the great women in your family but, I guess, climate change - well, she had other plans.
Julie: Kristin Miller is the heir to a wet t-shirt empire.

So, in this future, just 29 years from now in 2047, her dream is to win a wet t-shirt contest? He also has Kristin give climate change, the thing he calls "the most serious issue facing humankind," the pronoun "she." Kristin collects her tears in a bowl so that she might someday be able to wet her t-shirt down to win a trophy. An empty spot waits for it with her mother's and grandmother's. After Nye had just made a point about how this is a feminist issue, this was incredibly tone deaf satire. Way to stand up for the women and girls, Bill!

This series of Bill Nye Saves the World had an unusual amount of religion bashing and taught us that, if we don't stop climate change, we might have to live in a world without wet t-shirt contests. I'm pretty sure you're going to be ok if you skip it.