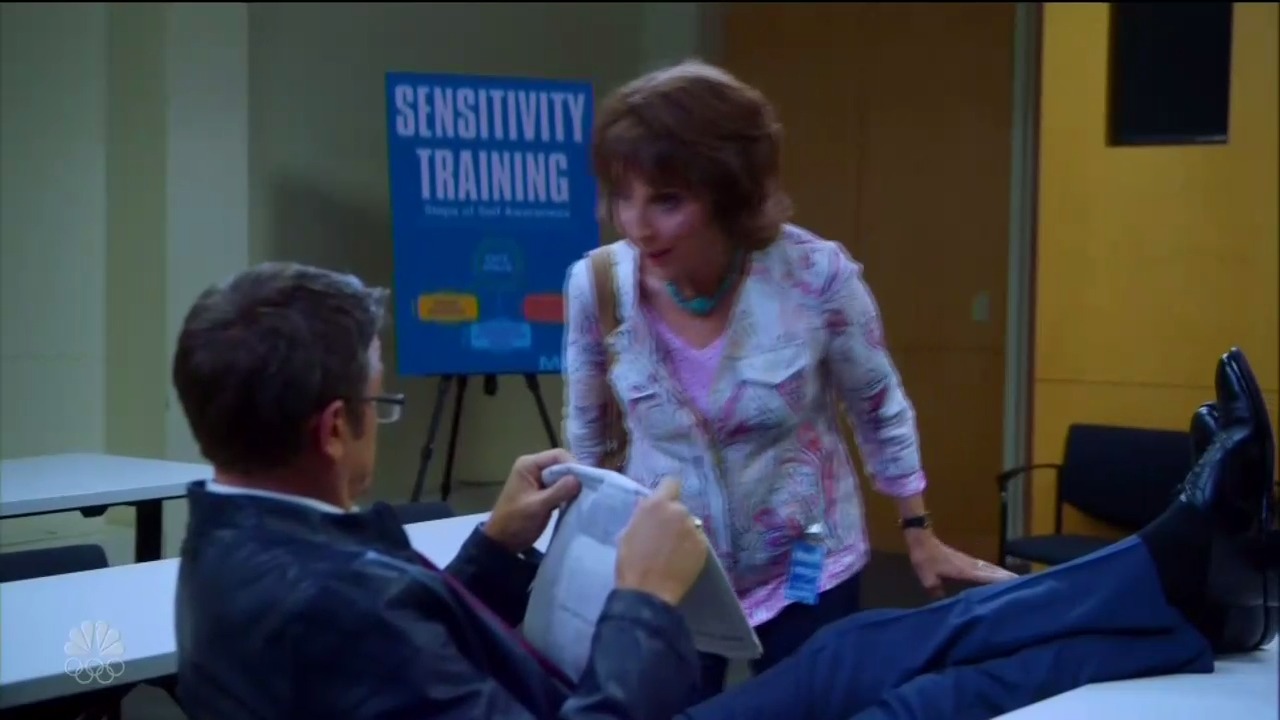 As PC culture continues its march into the ridiculous, NBC sitcom Great News appears to be hurrying it along. Their December 21 episode "PC Culture" saw Carol and Chuck, two of the older members of staff, forced to attend sensitivity training because it is virtually impossible to keep up with what the rules are in order to maintain political correctness. Initially, they fight back, and they make good points. Too bad the writers couldn't leave it there and had to blame President Trump for the left's inability to enjoy, well, anything.

After attending a sensitivity training class, Carol and Chuck decide to give the rest of the office a taste of how difficult it is to maintain political correctness. They spend the day holding their coworkers to the standards set for them in sensitivity training, standards which none of them are able to meet.

Greg: What did you two do?
Carol: We didn't do anything. Your insensitive staff offended us.
Beth: Hey, guys.
Carol: I'm not a guy. Gender discrimination.
Chuck: (Sneezes)
Gene: God bless you.
Chuck: God? Offended!
Carol: Oh, so I guess you couldn't be a delivery woman. Triggered.
Wayne: Aw, thanks, dude.
Chuck: Dude? I don't identify as a cowboy! I need a safe space!
Portia: Gun violence continues--
Chuck: Guns have triggers.
Carol: Triggered!
Greg: And we're out. Thanks, guys. That was on television. So you reported the entire staff.
Carol: We just wanted to prove that this PC stuff has gone too far. Anything could be considered insensitive these days.
Greg: That might have been a cool take a few years ago, but this is 2017. The President just asked Congress to fund something called Bitch Jail. There are literal Nazis in the street. We had one on the show last night.

Carol is right in saying that "anything can be insensitive these days," and the fact that the entire staff landed in sensitivity training is proof of that. The PC culture war has been going strong for years; one can hardly blame Donald Trump's presidency, which hasn't even been in effect for a year. Forms of diversity or sensitivity training have been part of workplace environments as far back as the 1960s, but really came into prominence in the late 1980s and 1990s. I don't think it's going to work to blame Donald Trump for a 50-year trend.

Yet, Greg does. He says that, a few years ago, it might have been cool to say that PC culture had gone too far. Really? Looking back at the Obama years, there was never any self-reflection or acknowledgment from social justice warriors that political correctness had gotten out of hand. People were still finding new things to be offended by and bending over backwards to be sensitive to those who might be triggered. I guess liberals have been crying wolf all this time, because apparently now that Trump's in office things are REALLY serious and political correctness is needed more than ever.

So, no more mocking political correctness, everyone. Because Nazis.