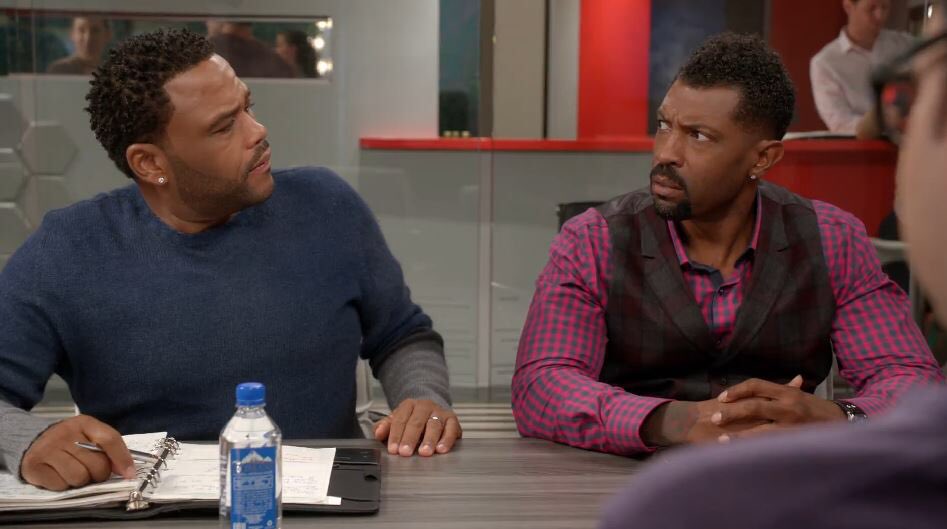 Blackish is always far too willing to put social commentary ahead of actual entertainment, and the November 14 episode "Please Don't Feed the Animals" is no exception. This week's social justice topic that took the place of comedy? Issues of race and incarceration.

In this episode, Dre (Anthony Anderson) and his wife Rainbow (Tracee Ellis Ross) argue about how much contact they want with his incarcerated godbrother, Omar. When they find out that Omar was innocent of the crime for which he is serving time and is being released, they still don't fully trust him. What if prison has changed him?

As you may know, one of my pet peeves about Blackish is the fact that they put a weird little educational video in every episode. This week, it was at the beginning, and featured statistics on incarceration in America: 2.2 million Americans are behind bars, that's a 500 percent increase in the last 40 years. Black people make up 13 percent of the American population and 35 percent of prison inmates. Things like that. Are you laughing yet? Nor am I, because this is the most confusing comedy in the world. Incarceration statistics aren't really my go-to when I need a moment of levity.

Another bizarre thing that happens in each episode is that the main character Dre (Anthony Anderson) goes to a meeting at work where they all sit around talking about the social issue on which that episode is focusing.  His white co-workers are all idiots, and racist in their idiocy.

Stevens: Dre, I don't like weighing in on your personal business, but you're right. You shouldn't be associating with prisoners. They're animals.
Dre: Whoa whoa whoa. I never said they were animals.
Stevens: No, no, no, no, no. They're just people who live in cages, and regular people come and visit them and watch them through glass.
Dre: Okay, I'm a little confused. So, is Darrington over there...
Stevens: Mm-hmm. ...
Dre: Is he an animal? Because didn't you hire him right from prison?
Stevens: Darrington has paid his debt to society.
Connor: He served six long months inside.
Dre: Okay, you're talking white-collar Club Fed, Martha Stewart time. I'm talking real time.
Stevens: Darrington's time wasn't real? Okay, he had to play doubles tennis, medium rare was more like medium, and the only premium movie channel he had in there was EPIX.
Curtis: So, what did Darrington do?
Stevens: He bankrupted Burma and was caught with a gentleman's amount of cocaine.
Connor: Oh, I loved cocaine! Yeah, without cocaine, I wouldn't need these glasses or my pacemaker.
Curtis: That's -- That's messed up. See, my cousin got caught with a gentleman's amount of. Same thing as coke. And he got five years. You know how much coke he would have had to have had on him to get the same sentence? 500 grams.
Charlie: That's because coke is a white drug. It's a magical powder that you snort through a rolled-up hundo in Aspen with boobies in your face. Now, crack is considered a black drug. It's dirty. You smoke it through a rusty pipe, and there are no big old boobies anywhere to be found.
Curtis: See, the system is built to hem a brother up, while you white folks just get a slap on the wrist.
Stevens: A slap on the wrist? Darrington has to pick up trash on beaches.
Dre: That's the difference between white-collar and black-collar crimes. We're treated unfairly while we're free, and treated even worse while we're behind bars.
Connor: Mm-hmm. So, why are you so mad at your wife for trying to improve life for your jail friend?
Stevens: Look at that. We just had an entire discussion about black people with no mention of slavery.
Curtis: Okay.
Stevens: This calls for a celebration.

Where to begin? Obviously, "white collar" doesn't refer to race, so there is no such thing as "black collar crime." It's white collar and blue collar, and they have nothing to do with the color of one's skin. As for powder cocaine versus crack, it's true that during the crack epidemic of the 1980s, crack sentences were such that a person would have to have 100 times the amount of cocaine to get the same sentence. As the vast majority of crack offenders were black, there was a racial disparity to this sentencing, but this wasn't racial targeting, it was targeting a specific crime that was a huge problem. Crack isn't the issue it was in the 1980s and, in 2010, Congress passed the Fair Sentencing Act which worked to reduce that disparity. Many conservatives are working towards justice reform, to make things more equal for everyone and not to continue failed policies.

Criminal justice reform is necessary, but what shows like Blackish fail to realize is that, by making this issue about race instead of crime, they do the issue a disservice.