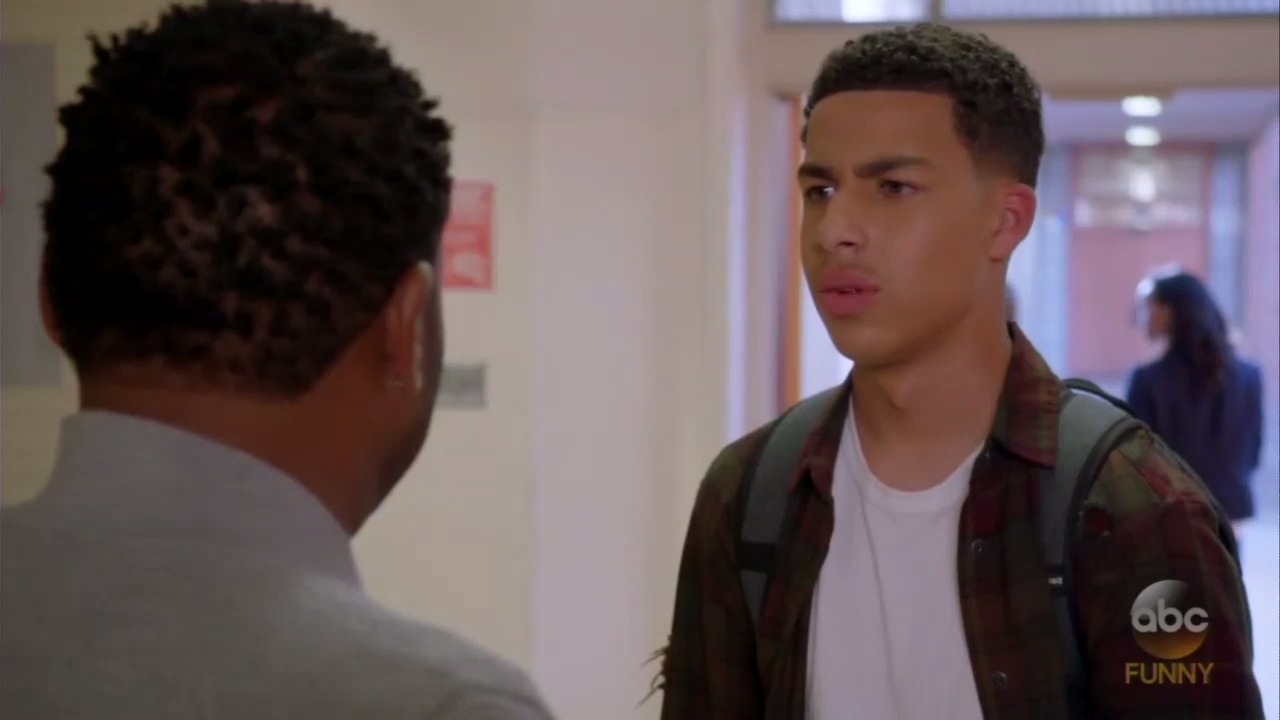 In the October 31 episode of ABC's Blackish, the spookiest thing is their take on education. In the episode, "Public Fool," Junior (Marcus Scribner) gets expelled from his fancy private school, which makes him persona non grata at the other private schools in the area. With those off the table, there is only one choice left - public school. Like most things on Blackish, they have to make this a race issue as well.

When the family realizes that Junior is going to have to attend Sherman Oaks High School, it doesn't go over well. His sister Ruby (Jenifer Lewis) responds by saying, "Public school?! Might as well send him to Afghanistan!" and aggressively bumps into him whenever she sees him in the hallway to toughen him up.

Junior's young twin siblings Jack (Miles Brown) and Diane (Marsai Martin) watch a bunch of old high school movies to see what public schools are really like, only they watch movies like Dangerous Minds, which teaches them only "that public school principals carry baseball bats and it was okay to use homophobic slurs in the '80s. This is not us."

Of course, for dad, Andre (Anthony Anderson), it's a race issue. Everything is.

Blackish does a couple of really odd things every week. On thing is how it adds "educational videos" in the middle of what's supposed to be a sitcom. They're not bad videos per se, but they're not why one watches a sitcom. In this episode, it was about the desegregation of schools, Brown vs. Board of Education, and the like. Odd thing number two is scenes in which Andre goes to work and they sit around the conference room table discussing race issues all casually. Here's this week's example of odd thing number two.

Stevens: Why so glum, Dre? Don't tell me you're still pouting about Chris Paul wisely choosing a Confederate state where he doesn't have to pay any income tax.
Dre: Almost as bad. Junior may have to go to public school.
Connor: Public, like a toilet? Ugh! Are they still doing that?
Stevens: Come on, Dre, you make enough money, you can opt out of that nonsense. In fact, it is a miracle that you survived public school.
Dre: Actually, I went to private school.
Connor: What?! Like black private school?
Josh: So, you're sending your son to public school to punish him. I get that. You know, my parents, they, uh... They wanted to knock me down a few pegs, so they sent me to public school. in Greenwich.
Dre: Greenwich?
Josh: It's not what you think, Dre. There's a lot of diversity there. I mean, sure, there's families like the Kelloggs and the Posts, but there were also kids whose families owned lesser cereal companies, too.
Dre: Sure, that worked out for you because of your zip code. But the public schools that black and brown kids have to go to have all been abandoned. Classic white flight.
Charlie: Yeah, we move to your neighborhoods, you guys are out. We move to your schools, you guys are out.
Dre: Mm-hmm.

The white people in this scene are all portrayed as privileged idiots who have no idea what the real world is like. Dre went to private school just like they did, so they are all on equal educational footing, yet they are shown to be completely out of touch with reality.

Dre is right, however, that zip codes have far too much to do with a child's educational success if private school isn't an option for that family. For far too many, living in a poor area means being trapped in a bad school district where kids don't even have access to a safe school environment let alone a quality education. Without a quality education, these kids aren't able to get out of these neighborhoods, trapping the next generation in the same situation.

If only Blackish had written a storyline in which Dre supported school choice, which has been doing incredible things to lift those "black and brown kids" out of terrible schools and into opportunities they would otherwise not have. It also does more for desegregation than any forced government program could.

Dre was right about a lot of the problem. Why didn't he share the cure?