Another week of American Horror Story: Cult, another round of political insanity. In the September 26 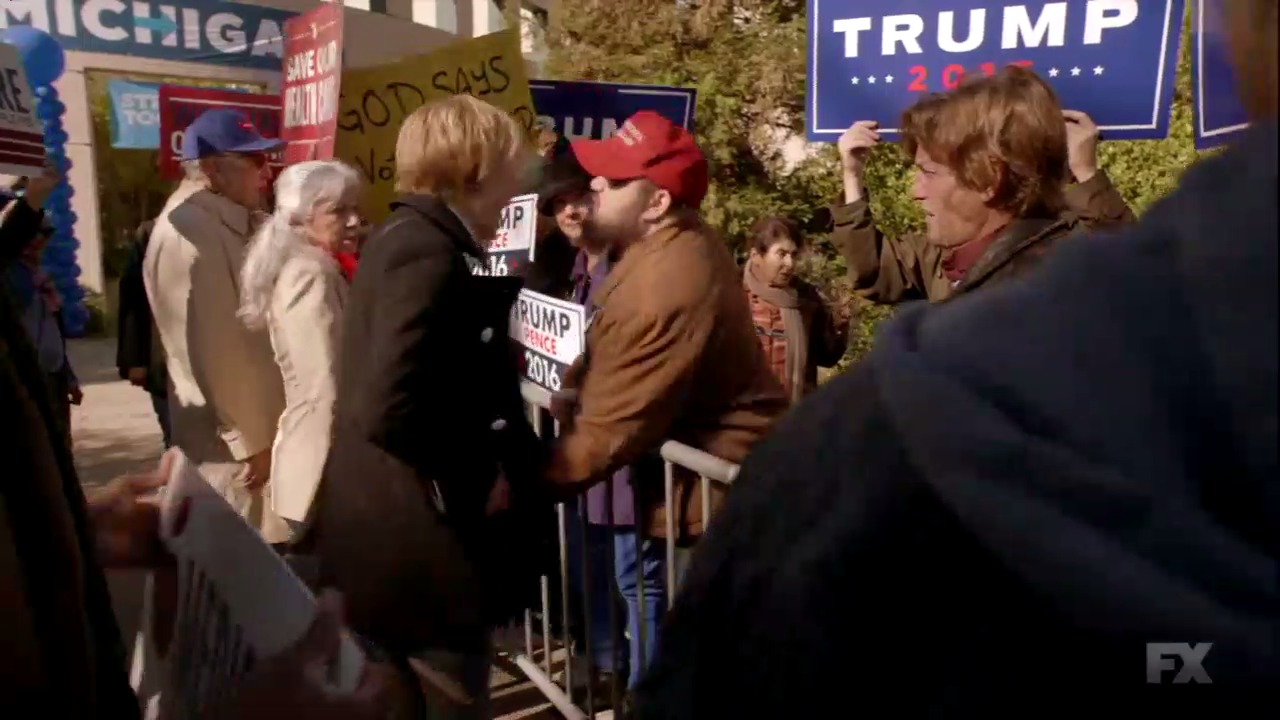 episode, titled "11/9," we flash back to election day 2016 and the days surrounding it. The main thread of this week's episode is the idea that Donald Trump supporters like sexual assault and go around committing it all over the place by grabbing random women by the you-know-what.

As the episode opens, voters are standing in line outside a polling place, and women are chanting, “This pussy grabs back!” That is the first time the word "pussy" is used in this episode, but far from the last. The final tally actually has that word used a whopping 18 times, an average of once every 4 minutes throughout the episode.

This is obviously a reference to the now-infamous “grab 'em by the pussy” comments Donald Trump made in 2005 which were made public shortly before the election, much to the delight of the media and celebrities who made hay of it. Oddly, Hillary Clinton ignoring her husband's own sexually inappropriate behavior didn't seem to bother these same people.

In this scene, Kai (Evan Peters) becomes interested in tv reporter Beverly Hope (Adina Porter) when he discovers that she's been off the air for a while due to a violent mental breakdown resulting from continued on-air harassment from Trump supporters shouting, "Grab her right in the pussy," during her reports. He finds a compilation of these incidents online.

Later, on the eve of the election, Ivy (Alison Pill) goes to a Hillary Clinton rally where she gets into a confrontation with Trump supporter Gary. For a moment, it seems that the show is going to acknowledge that people had genuine concerns that caused them to cast their votes for Donald Trump (even if that vote was simply against Hillary Clinton), but then, well, he actually grabs her.

Group (chanting): Lock her up! Lock her up! Lock her up! Lock her up... Lock her up! Lock her up...
Ivy: Love trumps hate!
Woman: What's she hiding? What about Trump's tax returns? What's he afraid we'll see?
Ivy: Don't bother. They don't want to engage. They just want to spread negativity.
Gary: Hey, Hillary started the negativity when she called us "Deplorables."
Ivy: She wasn't talking about all of you. She was talking about the bigots-- your side has a few.
Gary: I am so sick of you people looking down on us. It really pisses me off.
Ivy: No, you're pissed because an educated black man ran the country for eight years, and a woman's about to run it for eight more.
Gary: You know, this is why real Americans hate the Democrats. Because you treat us all like we're wife-beating, redneck Klansmen.
Ivy: That makes it okay to vote for a man who brags about walking up to women and grabbing their pussies?
Gary: Well, maybe you could use a little pussy grabbing, you elitist, PC bitch.

We are then treated to a scene in which Ivy and her soon-to-be nanny Winter (Billie Lourde) bemoan how "Trump and those dickfaces feel like they can get away with anything" and rant about white male entitlement.

In this episode, we further find out that Kai, the show's Trump supporter, is perhaps not quite what we have believed. We knew he was a little weird, but now have confirmation that he's an actual sociopath. The show also casually drops into conversation that he's an Iraq War veteran. It's unclear if Kai supports Donald Trump's presidency for political reasons or if he just likes the chaos he knew a Trump presidency would bring.

Kai, as it happens, is all about creating chaos and weaponizing fear in his quest for power and world domination. In this episode, we see how he has been orchestrating brutal violence since the beginning of the series to gain followers and establish a cult. He convinced Harrison (Billy Eichner) to murder his boss, had tv reporter Beverly Hope's professional rival Serena Belinda (Emma Roberts) murdered, and got Gary (Chaz Bono) to saw his own hand off to get to the polls in time - which ends in Gary holding his bloody stump up after casting his vote for Trump and shouting, "Welcome to Trump's America, mother fuckers!"

As an aside, I will admit that I didn't recognize Chaz Bono, and his acting as the character Gary was perfectly acceptable, but I believe this was stunt casting by Ryan Murphy. Does he think conservatives would care if a transgendered person played a Trump supporter? We don't. Chaz Bono, male, was born Chastity Bono, female, to Cher, a Democrat, and Sonny Bono, a Republican. When she came out as trans to her parents, her father was widely known to have been much more accepting than her mother.

So, to recap, this episode makes it clear that nobody actually voted for Trump because they had genuine policy concerns. They were racists, misogynists, sexual assailants, or, potentially, murderers. Tune in next week to find out what else you have wrong with you that you didn't even know about!