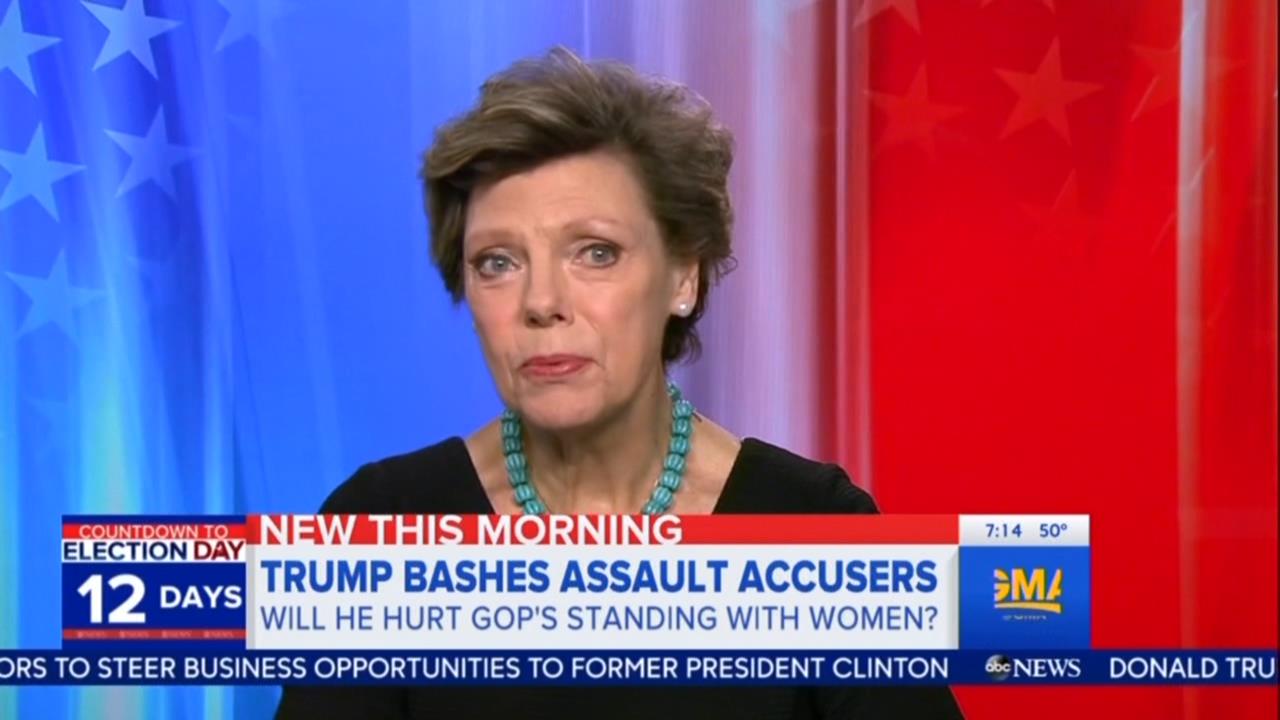 Thursday morning on ABC’s Good Morning America, anchor George Stephanopoulos and commentator Cokie Roberts repeatedly cast doubt on the idea that Donald Trump’s sexual assault accusations could be false. After being grilled by Stephanopoulos, Trump dismissed the accusations as made up stories but that wasn’t adequate for ABC’s Cokie Roberts who reacted skeptically.

“[N]obody has ever wanted fame for sexual assault,” Cokie stated on Thursday morning’s GMA. “And he says it's been debunked but it hasn't been debunked so I think that, you know, a lot of people have trouble believing him on that front,” she added.

Funny enough, Cokie made almost the opposite claims about Bill Clinton’s accusers.

On an October 10 Nightline from this year, Roberts asked viewers to keep an open mind on whether or not Clinton's accusers were telling the truth. “The women have awful stories to tell, but we don’t know if they’re true,” she stressed.

This wasn’t the first time Roberts doubted Clinton’s accusers. She was doing the same thing throughout the ‘90s.

On Kathleen Willey she said on March 16,1998 episode of NPR’s “Morning Edition”:

ROBERTS: There are others who question Ms. Willey's account, and that's important to keep in mind.

Again, on Paula Jones, in an April 2, 1998 broadcast she gave a sigh of relief that Jones’ case was thrown out. “[W]ith any luck, no [more] stories about the president’s body parts!” she remarked. “To have [the case] thrown out is a great victory for the White House,” she added, as the panel actually chuckled about Clinton’s various scandals. The NPR panel showed the same dismissive, annoyed tone to Paula Jones on another show four days later:

COKIE ROBERTS: Well, the president's interview is quite interesting because he says, in answer to most questions, that it's all up to the lawyers and he doesn't know anything until he reads it in the newspapers. Which in the case of invoking executive privilege is sort of interesting, since he's the only one who can do it. But there it is, Paula Jones is gone.

Roberts also urged the media to “move on” from Clinton’s scandals because the public really didn’t “care” about the accusations. In another NPR broadcast from March 1, 1999 she said:

ROBERTS: Well, actually lots of members were asked, and the answers were all pretty much the same which is, I don't know anything about that. ‘Let's move on’...Unfortunately, it hangs there, and what they don't know is whether there's gonna be something else to come. And they really did think that once impeachment was over and the trial was over and the president was not found guilty, that they really could now stop all of this, but there is a concern now that it will just drag on and on and on.

[Y]ou have allegations like this, these are serious allegations. And so then the question is, you know: Do you not report them? Of course you report them. But where does it go? And I think that that's a question that nobody quite knows how to answer. And does anybody care? And that's another question that is, you know, very interesting. You have, in the one scientific poll that's been done so far, 62 percent of the people believing Juanita Broaddrick, but as with all of the other allegations against the president, basically not caring.

Roberts and her fellow journalists were also quick to bash Republicans and defend Bill Clinton. In 1999, Cokie Roberts told anchor Peter Jennings that Republicans were just trying to "embarrass" Clinton, by continuing his trial before the Senate on the Monica Lewinsky scandal. After his State of the Union address, Roberts came to Clinton’s defense again, gushing as anchor of Good Morning America:

[I]t was a remarkable performance last night. He's always remarkable in these performances but this one was stronger than usual, and I think that he certainly put Republicans in a position where he hit every popular theme there was to hit and what are they not going to do now?

Even so, Roberts continues to spin her past coverage of Bill Clinton’s accusers as tough and fair journalism. On that same episode of Nightline, she stated, “Nobody was harder on Bill Clinton when he was president than I was.” The evidence seems to show otherwise.

Roberts also took the same approach to the Trump accusations as to the ones made by Anita Hill against Clarence Thomas. Roberts said on an ABC This Week roundtable May 22, 2014:

[O]ne of the things that we have been way too slow to change on, but finally slightly getting there, is listening to women when they make these complaints.

Apparently the media thinks the only women worth listening to are the ones making accusations against Republicans.