Lego Comes Out as Gay 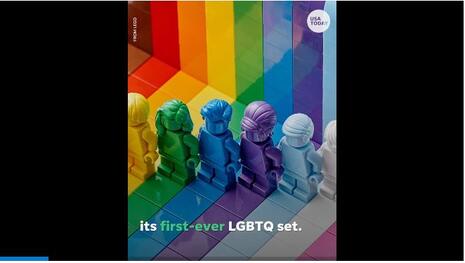 Having neutered the notoriously toxic masculinity of Mr. Potato Head, progressives are continuing their long march through the toy industry. Lefties intent on remaking the world in their image know their project depends on indoctrinating the young.

Thus, Lego has announced “‘Everyone is Awesome,’ its first LGBTQ-themed set,” according to USA Today’s Christine Fernando. Lego is launching the toys in “Pride Month” in June, which, as we know, is Ramadan for the leather speedo set.

Fernando explains, “The colors in the set are inspired by the rainbow flag, according to the statement.” And they probably don’t hurt when you step on them. But just the rainbow flag? Surely intersectionality demands the inclusion of other victim groups.

Indeed it does, and Lego’s got it covered:

The set also includes black and brown colors “to represent the broad diversity of everyone within the LGBTQIA+ community,” as well as pale blue, white and pink representing the transgender community, and a purple drag queen figure, according to a description of the set from designer Matthew Ashton.

No doubt Lego will follow up with a Portland Public Library set where the purple drag queen can really strut his stuff. And with all those new letters in the alphabet soup, surely there will be many opportunities for follow-ons.

To listen to Ashton, you’d almost think he believes this is something more than a cynical nod to this moment of civilizational dissolution. It’s an offering to the god Inclusion. According to Fernando, “he wanted to create a model that symbolized  inclusivity and celebrated  everyone, ‘no matter how they identify or who they love.’”

And it’s also about celebrating Ashton and his feelings. “Growing up as a gay teen in the 1980s was ‘incredibly daunting and scary’ because of rampant homophobia at the time,” says Fernando.

Ashton “wrote that if he had been given a set like this while growing up, ‘it would have been such a relief to know that somebody had my back. To know that I had somebody there to say ‘I love you, I believe in you. I’ll always be here for you.’”

Now, as a bigshot at Lego, he’s one of the lucky ones. “But there are so many that face so much discrimination, hate or violence.” Right. The most trendy, celebrated identity group out there, that punches far above its weight in actual numbers, is really up against it

But hey, you budding grievance drones, don’t ever forget: There’s a multi-billion dollar corporation out there that’s “here for you.”