LGBT Character Blames Church for AIDS: 'Wouldn't Have This Disease If Wasn't for Church'

“Take Me to Church,” the May 16 episode of the third and final season of FX’s Pose, centers around Pray Tell (Billy Porter) one of the many characters in this ensemble show about the gay and trans community in the 1980s and 1990s in New York City. Upon confirmation that his HIV has turned into AIDS, Pray Tell goes home to tell his religious mother, Charlene, and his aunts about his diagnosis.

What follows is a discussion on religion, and Pray Tell actually blames the church and Christians for his struggles.

Pray Tell: I don’t know any other way to say this… I have AIDS. I'm dying. I have been... HIV positive for six years, and I didn't want to burden y'all until it became serious. I know that we've already been through so much. Mommy, I'm not trying to upset you.

Latrice: See, I always knew this would happen. Heavenly Father, save his soul...

Latrice: I never stopped loving you. Hate the sin, love the sinner.

Latrice: Which is why I care about your soul.

Jada: Just shut your ole big mouth. If you cared about the state of anyone's soul, then you would have stood up for me when the church judged me for getting a divorce.

Latrice: You had a child out of wedlock with a married man!

Jada: I lost my community. All because of some outdated law that was created by men some 3,000 years ago.

Pray Tell: No, no, no. Don't put those words beside each other. Your god made me this way, and there is nothing wrong with me.

Latrice: God made you in His image. Everything else is a choice.

When Latrice invites Pray Tell to church with her, telling him he'll like the new pastor, Pray Tell says, "I'm not going to that wretched place." As it turns out, Pray Tell was once in a gay relationship with the new pastor, Vernon Jackson, when they were young. Pray Tell is shocked to find out about Vernon's new life:

Vernon: Ebony. We have three kids.

Pray Tell: You married my high school best friend? You know I told her every intimate detail of our love affair. She knows your truth and He knows your past.

Vernon: I'm living my truth. And I'm happy. It took some time, but I resolved those feelings. With Ebony's help. I made a choice, and I decided to give my life over to Christ, fully. This is my home.

Vernon: No, I-I... I loved you. And I'm not ashamed of what you once meant to me, but you were asking me to step away from the church, and I...

Vernon: If you just got down on your knees, I promise you...

Pray Tell: Oh, trust, I have been down on my knees. And I have received many blessings from many men.

Vernon: You know, it's never too late for salvation.

Vernon has moved on, or so it appears. When Pray Tell is over for dinner, he and Ebony have a moment alone during which Ebony tries to convince him that Vernon is a changed man because of God but life is still hard. Pray Tell says, "Your god sounds like a real asshole":

Ebony: You notice how there's five years between Cynthia and the baby? Yeah, it's because, uh... Well, he wouldn't lay with me in all that time. I know how you two were together back in the school days. And I hear how Vernon talks to you. And I see how you look at him. But I do want to... I want to make him feel good.

Pray Tell: Ebony, you're asking me to tell you how to pleasure your man?

Pray Tell: Sweetheart... Your husband is a homosexual.

Pray Tell: There's nothing you can do to change that.

Ebony: No, he is a strong, good, God-fearing man. The good Lord wouldn't give Vernon something that he couldn't overcome.

Pray Tell: He is just as God made him. It's not a choice. But you are making a choice. Why?

Ebony: Because I believe in marriage. How many marriages that aren't as strong as ours are gonna break apart if ours breaks apart?

Pray Tell: Your marriage is not strong. It's built on sinking sand. I know, I know... That your church teaches you that there's no higher calling than to stand by your man. Men created those lies so that they could act out and then come back home whenever they wanted to.

Ebony: What does that mean? Hmm?

Pray Tell: That even in their own churches, Black folks worship a white man.

Ebony: Jesus didn't absolve our sins through joy and peace. The crucifixion was torture and pain. That's the Lord telling us that life is violent. Life is cruel. Life hurts. But the more we hurt, the closer we are to God.

Pray Tell: Your god sounds like a real asshole.

As Pray Tell is leaving the house, he passes by Vernon, who had stepped out to be by a dying woman’s side as she peacefully passed. The two share a passionate kiss as Pray Tell reveals he has AIDS.

On what looks to be his last night home, Pray Tell has another heart-to-heart with his mother, who seeks his forgiveness. Charlene also asks Pray Tell to come to church with her one last time. He initially resists, telling his mother, “I don't know that I need to be up in the Lord's house, knowing how the saints feel about me and my kind,” but she convinces him to go for the music. 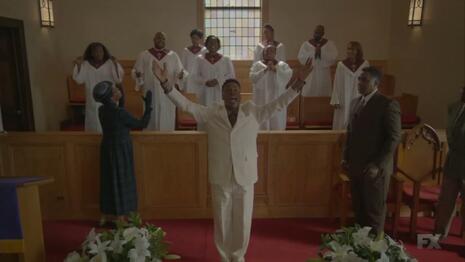 In the climatic moment of the episode, Pray Tell heads to church with his mother and his Aunt Jada where he does quite the musical performance.

“So you basically came into town for a farewell performance, and just tore us all up,” Jada later tells him.

The episode aired the same week that the Hollywood Reporter published a lengthy feature piece on Porter revealing his HIV status, “Billy Porter Breaks a 14-Year Silence: ‘This Is What HIV-Positive Looks Like Now.’”

In it, Porter directly references Pray Tell and his status:

In the 14 years since [finding out he was HIV-positive], the Emmy-winning star of Pose has told next to no one, fearing marginalization and retaliation in an industry that hasn’t always been kind to him. Instead, the 51-year-old, who has cultivated a fervent fan base in recent years on the basis of his talent and authenticity, says he’s been using Pray Tell, his HIV-positive character on the FX series, as his proxy. “I was able to say everything that I wanted to say through a surrogate,” he reveals, acknowledging that nobody involved with the show had any idea he was drawing from his own life.

There also seems to be a resemblance between Porter and Pray Tell’s faith as well as Porter’s mother and his mother on Pose. “HIV-positive, where I come from, growing up in the Pentecostal church with a very religious family, is God’s punishment,” Porter said at one point. “And my shame was really connected to my relationship with my mother and my ex-relationship with the church. My mother had been through so much already, so much persecution by her religious community because of my queerness, that I just didn’t want her to have to live through their ‘I told you so’s,’” Porter said about keeping his HIV status secret.