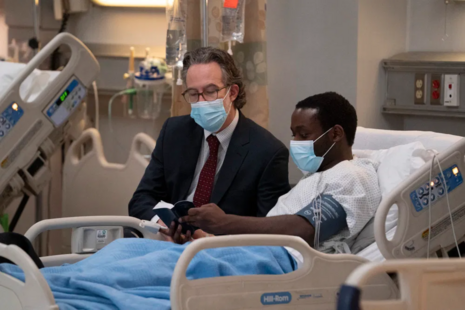 New Amsterdam must be gunning for a GLAAD Media Award nomination with its latest episode: “The Legend of Howie Cournemeyer.”

Focused on the hospital’s free HIV-testing day, Tuesday night’s episode campaigned against “bigoted” restrictions on blood donations from gay men, denigrated The Church of Jesus Christ of Latter-Day Saints, and was bookended with gay sex scenes.

In one storyline, New Amsterdam Medical Director Max Goodwin (Ryan Eggold) learns that in 1986 during the height of the AIDS epidemic the blood bank director, a gay man, concealed the identities of gay donors to allow them to donate blood in violation of federal policy. Max is sympathetic because “It did circumvent an ugly, very discriminatory regulation” and confronts the medical director at the time for stopping it who says, “You know, the last time I checked, those were still the FDA guidelines. And as far as I can tell, you aren't doing a damn thing about them either.”

This is not quite true. While blood donations from gay men began to be prohibited at the height of the AIDS crisis, in 2015, the Food and Drug Administration changed the lifetime ban to a 12-month deferral window, then recently to a 3-month deferral to combat extreme blood shortages under COVID. GLAAD continues to fight against the policy, calling it “stigmatizing” and even trying to falsely claim “risk factors for HIV transmission including behaviors such as having unprotected sex and having multiple sex partners are identical regardless of someone’s sexual orientation.”

Confronted with the current policies, Max calls them “bigoted” and “hate” (the same language GLAAD uses) and says he’s going to ignore the federal rules.

Max: You know, the gay blood ban? It's not just a regulation. It's hate. We should be ashamed for allowing it. So I'm initiating a new policy regarding the gay blood ban. I'm ignoring it. And Howie is our first donor.

Max: Yeah. Well, then we'll just take them to court. And when we win, they will throw that bigoted law in the trash, thanks to you.

Howie: I've been screaming about this nonsense for 30 years, and nothing happened. Look what you did.

Another woke dream come true wrapped up in one tidy episode.

While this is going on, Dr. Floyd Reynolds (Jocko Sims) informs a patient, Kwame, that he is HIV-positive. Kwame denies it and flees the hospital despite having a damaged pancreas. After he’s rushed back to the hospital, Elder Shumway, an older, white man comes to Kwame's bedside, but rejects him when he hears the diagnosis.

Shumway: I'm the president of his mission for the Church of Jesus Christ.

Shumway: It's gonna be okay. I'm here. Tell me what happened.

Shumway: You can tell me anything. Remember?

Kwame: I was... with a man. I have HIV. Please don't send me back. I want to finish my mission. The Church is all I have. God is all I have.

Shumway: Then why did you turn your back on Him? Your mission is over.

Talking with Dr. Reynolds, Kwame defends his Elder saying, “He knew I was gay. He treated me with grace and acceptance. All he asked of me was to not act on my desires.” Kwame laments that HIV means “I will never get God back” and asks if there is anything he can do to prevent his same-sex attraction, calling it “disgusting.”

Reynolds insists, “Brother, this is not disgusting. This is who you are.”

“Sex is not who I am. I am my community. My family, my faith. I am an Elder in the Church of Jesus Christ of Latter-Day Saints. That is who I am,” Kwame declares.

Reynolds works to understand and help him by bringing back the Elder:

“What Kwame wants more than anything is to be a Mormon husband to a Mormon wife, and he thought he lost that...He thought he lost that because he's HIV-positive, and he thought that meant that he couldn't have children. Which is the cornerstone of his spiritual community ... But between HAART therapy and PrEP, of course, HIV can be untransmittable and safe for conception. So I called the Elder, let him know that, and he feels there's a path for Kwame. He even suggested that he can marry a woman who knows about his struggles.”

This is considered abhorrent. “Are you kidding me? You used the science of HIV to put someone back into the closet," another doctor scoffs. "He is choosing a [traditional Mormon] life based on the idea that he has to be somebody that he's not. Because there's something wrong with who he is.” So, basically, sex is who we are, don't bother trying to live for something more.

This hour of gay propaganda began and ended with gay sex scenes and was brought to you by sponsors including Verizon, Disney, and McDonald's.