‘Should Know Better:’ Halle Berry Forced to Apologize for ‘Consideration’ of Trans Role 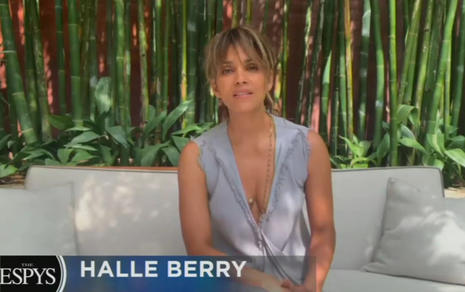 Over the weekend, actress and former People's Most Beautiful Person of the Year Halle Berry committed an unspeakable thought crime against humanity.

On Friday, during an Instagram Live interview with hairstylist Christin Brown, Berry talked about an upcoming role she was considering playing a transgender man.

Of course, as we learned from Scarlett Johansson’s experience two years ago, social justice warriors excoriate straight cisgender actors for having the audacity to act. How dare someone portray an experience they haven’t themselves lived!

Berry quickly released a hostage note on Twitter on Monday apologizing to the mob for her wrong think:

Over the weekend I had the opportunity to discuss my consideration of an upcoming role as a transgender man, and I'd like to apologize for those remarks. As a cisgender woman, I now understand that I should not have considered this role, and that the transgender community should undeniably have the opportunity to tell their own stories.

I am grateful for the guidance and critical conversation over the past few days and I will continue to listen, educate and learn from this mistake. I vow to be an ally in using my voice to promote better representation on-screen, both in front of and behind the camera.

While GLAAD was pleased with the self-flagellation, others tsk-tsked the Oscar winner’s unwoke faux pas.

“In 2020, Hollywood should know better than to cast cis people in roles about the transgender experience, but we're still having to remind the industry that trans people should be able to tell their own stories onscreen,” Refinery 29 griped, lecturing, “[T]he fact that she was considered for the role speaks to a disturbing pattern of minimizing the lived experience of trans people.”

In the original Instagram interview, Berry described the film role as “a character where the woman is a trans character, so she's a woman that transitioned into a man."

“That's what I want to experience and understand and study and explore," Berry said. "It's really important to me to tell stories, and that's a woman, that's a female story – it changes to a man, but I want to understand the why and how of that. I want to get into it."

Aside from expressing interest in exploring a story different than her own, Berry committed the cardinal sin of “misgendering” the theoretical transgender male character as female.

“The very notion that a trans man is a ‘female’ role demonstrates that Berry has some misguided notions about trans people,” The Daily Beast scolded. “Trans men are men and trans women are women—before, after, and without making any physical changes to their bodies.”

Insider intoned, “[T]he portrayal of trans people by non-trans actors is a dark mainstay of cinematic history,” almost as if this was like wearing blackface.

In addition to taking away the few available roles from transgender actors who oftentimes have limited opportunities in film and television because of transphobia, the film explored how such a trope can have real and dangerous consequences.

The second half of the documentary makes the point that when transgender roles are played by cisgender people, it perpetuates the idea that trans people are just playing "dress up."

"The public thinks of transwomen as men with really good hair and makeup in costume," actress Jen Richards said in "Disclosure." "And that's reinforced every time we see a man who's played a trans woman offscreen."

Note the irony of using the word of a white biological male against a woman of color.

For those keeping track of the intersectionality Olympics, mark this one down as LGBTQ 1, BIPOC 0.