'Gone With the Wind' CANCELLED for 'Racist Depictions' 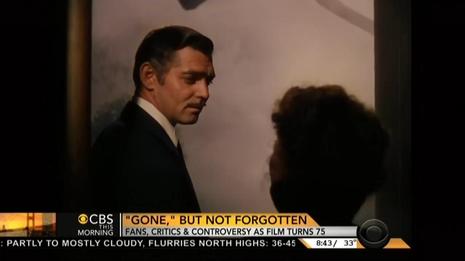 Gone With the Wind is gone from HBO Max's video library after the classic film was effectively "cancelled" in today's racial climate.

On Monday, 12 Years a Slave screenwriter John Ridley wrote an op-ed in the Los Angeles Times calling for HBO Max to remove Gone With the Wind from its library because it “glorifies the antebellum south,” “ignore[s] the horrors of slavery,” and “perpetuate[s] some of the most painful stereotypes of people of color.”

But Ridley also argued the film has resonance today, saying it “continues to give legitimacy to the notion that the secessionist movement was something more, or better, or more noble than what it was — a bloody insurrection to maintain the ‘right’ to own, sell and buy human beings… And it continues to give cover to those who falsely claim that clinging to the iconography of the plantation era is a matter of ‘heritage, not hate.’”

He called it “painful” to see Gone With the Wind in the HBO Max library and claimed the film “has helped to perpetuate the racism that’s causing angry and grieving Americans to take to the streets.”

Complaining there’s not “a warning or disclaimer preceding the film,” Ridley said he doesn’t “believe in censorship” but wants the film removed until “a respectful amount of time has passed.” He hoped the movie would someday “be re-introduced to the HBO Max platform along with other films that give a more broad-based and complete picture of what slavery and the Confederacy truly were. Or, perhaps it could be paired with conversations about narratives and why it’s important to have many voices sharing stories from different perspectives rather than merely those reinforcing the views of the prevailing culture.”

Within a day, HBO Max responded by removing the film that won 8 Oscars in 1940, including the first for a black actress, and releasing a statement:

Gone With the Wind is a product of its time and depicts some of the ethnic and racial prejudices that have, unfortunately, been commonplace in American society. These racist depictions were wrong then and are wrong today, and we felt that to keep this title up without an explanation and a denouncement of those depictions would be irresponsible. These depictions are certainly counter to WarnerMedia’s values, so when we return the film to HBO Max, it will return with a discussion of its historical context and a denouncement of those very depictions, but will be presented as it was originally created, because to do otherwise would be the same as claiming these prejudices never existed. If we are to create a more just, equitable and inclusive future, we must first acknowledge and understand our history.

This comes on the heels of HBO Max removing Elmer Fudd’s rifle from their new Looney Tunes Cartoons as well as Paramount Network canceling Cops and others calling for the cancellation of cop shows in the wake of the killing of George Floyd and subsequent anti-police protests.

The cancellations are coming fast and furious – what will be next? “After all, tomorrow is another day.”