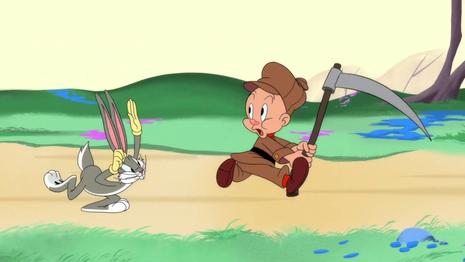 Reports TV Guide, “Elmer Fudd and Yosemite Sam have to find another way to try and catch that wascally wabbit, Bugs Bunny, in HBO Max's reboot of Looney Tunes. Elmer's rifle, his longtime weapon of choice, is not a part of the new version of the classic cartoon series, and Yosemite Sam's hip is holster-free in the new take, too.”

In the new cartoons, Fudd, whose entire schtick was based around him hunting Bugs Bunny for rabbit season, is given a giant scythe and “Sam bears his literal arms (for an arm-wrestling contest) instead of brandishing his usual pair of pistols.”

TV Guide notes “anvils and complicated booby traps are also a continued part of the new series,” so it’s not lethal weapons that are banned, only guns.

Calling the removal of guns “making a small stride toward modernization,” TV Guide explained this was a political move:

The change comes as a response to gun violence, but the show won't completely forgo the exaggerated violence Looney Tunes is famous for.

"We're not doing guns," [executive producer and showrunner] Browngardt said [to the New York Times]. "But we can do cartoony violence — TNT, the Acme stuff. All that was kind of grandfathered in."

They even acknowledged the violence in the new show might go too far in the New York Times story:

“Some of them have maybe gone a little too far, so they might come out in a different format,” Browngardt said. “Maybe they’ll come out packaged for an Adult Swim type of thing.” (Cartoon Network, home of the gleefully absurd Adult Swim programming block, is part of the Warner Bros. empire.)

“‘Looney Tunes’ is pretty much the antithesis of that,” he continued. “It’s two characters in conflict, sometimes getting pretty violent.”

Artist Michael Ruocco, who worked on the series, dragged the people who complained about the hunter’s missing rifle. He called a gun “limiting,” complaining about the limited number of “gags” that could be done in a Tweet:

Do you guys SERIOUSLY care whether or not Elmer Fudd has a gun in our shorts? You know how many gags we can do with guns? Fairly few. And the best were already done by the old guys. It's limiting. It was never about the gun, it was about Elmer's flawed, challenged masculinity.

He also admitted that the media environment at the time of production was anti-gun because of “a record number of mass shootings.”

Also, think about context about what's going on in the world, and how long ago our show started production. Late 2017, early 2018. Right on the heels of a record number of mass shootings, particularly the horrific one in Las Vegas. NOBODY wanted to touch guns working in media.

Ruocco went on to say he “personally did not care or miss” Fudd’s gun and they “got a lot more out of his personality and his lack of wit than any implement in his hands,” citing “wordplay, dynamite and the character's own naivety/stupidity.”

He encouraged people to “Move on.”

Watch one of the new gun-less Elmer Fudd cartoons below: