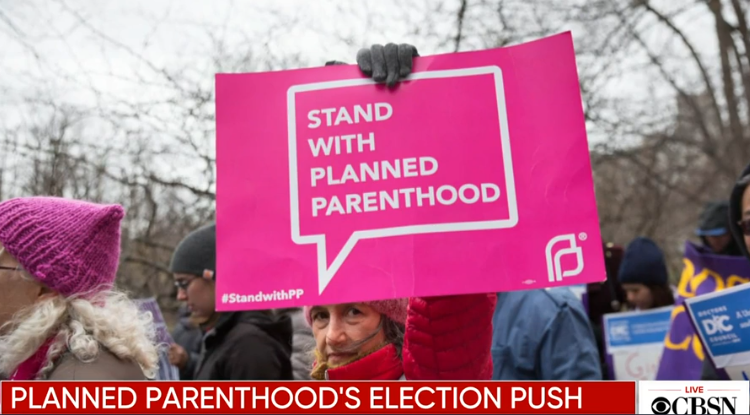 Big Abortion is jumping into the 2020 race with big numbers. It was announced Thursday that Planned Parenthood is launching what CBS News’ Kate Smith reported is “the biggest electoral effort in its history: a $45 million spend to support presidential, congressional and state-level candidates in the 2020 elections who support abortion rights.”

Smith interviewed Planned Parenthood Votes Executive Director Jenny Lawson who said, “The stakes have never been higher,” and admitted, "[The Trump Administration] has managed to undo so much over the last three years" while scaremongering that “this summer the Supreme Court might gut Roe v. Wade.”

According to Planned Parenthood’s own 2017-2018 annual report, the organization committed a record high number of abortions while receiving a record high $617 million in taxpayer funding – representing 37% of its overall revenue. And now it's spending $45 million to elect Democrats.

Under the Hyde Amendment, which all the Democrat presidential candidates support gutting, federal funds cannot be used for abortion, but, of course, we know that funds are fungible and money that Planned Parenthood takes from the government frees up more money for abortions or campaigning.

In a CBSN segment that was interrupted on air by breaking impeachment news but published in full online, hosts Anne-Marie Green and Vladimir Duthiers interviewed Smith on her reporting and all three gushed over Planned Parenthood and how “ridiculous” and “stunning” it is that women come from many states to the Planned Parenthood “abortion haven” in Colorado.

Smith: There is so much at stake if you are an abortion rights activist. Last year, you saw an unprecedented number of abortion restrictions and bans across the country. This is not just the south and Midwest that we’re talking about. I think there were 38 different states that introduced these restrictions. They are really leaving no stone unturned. Every single state they are looking at, and how can they either find candidates that are less hostile toward abortion rights, or in some cases, find candidates that are particularly open to reproductive health. For example, I spoke to a volunteer activist in Colorado. She was telling me that Colorado, there Planned Parenthood affiliates see patients from 38 different states.

Smith: Her strategy for 2020 is making sure that Colorado is best positioned politically to maintain its, you know, status quo of being something of an abortion haven for all of these patients you are seeing all over the country coming here. Colorado is not unique by any means. We are seeing that happen in Illinois and New York. Where can we keep the ground we have had and how can we stop losing ground in these other states?

Notice how Smith uses the word “we” – it’s not at all clear she is quoting the abortion activist and sounds like it’s her own personal feelings, which would be no surprise given the tone of the interview and what we know about the liberal media in general.

Green went on to continue promoting Planned Parenthood, saying, “Can we just point out that when you say there’re patients coming from all these different states, they’re not just coming for abortions, they’re coming for basic health coverage, right?”

“That’s exactly right,” Smith agreed, spitting out more talking points on behalf of the abortion Goliath. “Planned Parenthood does so much more than abortions, of course, they do birth control, STI screenings.” At least she didn’t propagate the lie that they do mammograms.

Of course, we know that nobody needs Planned Parenthood for “basic health coverage” as there are thousands of federally qualified and community health centers that provide all the services Planned Parenthood does and far more, often for less, without providing abortions - or money to elect pro-abortion Democrats.