For those pro-aborts who want to wear their empty uteruses on their sleeve, Gucci has the perfect new fashion line! The 2020 Gucci Cruise collection by creative director Alessandro Michele features the latest in high fashion abortion-wear.

According to the Associated Press, Michele “made a clear abortion rights message … as the debate over abortion heats up once again in the United States.” He said the recent state pro-life laws in the U.S. “made me consider how much women should be highly respected.”

Michele chose to make his sentiment known by adding the hackneyed “my body, my choice” pro-abortion slogan to a jacket in a fashion show at Rome’s Capitoline Museum on May 28: 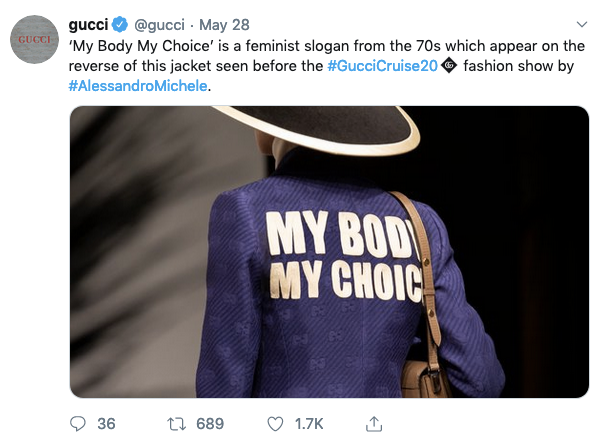 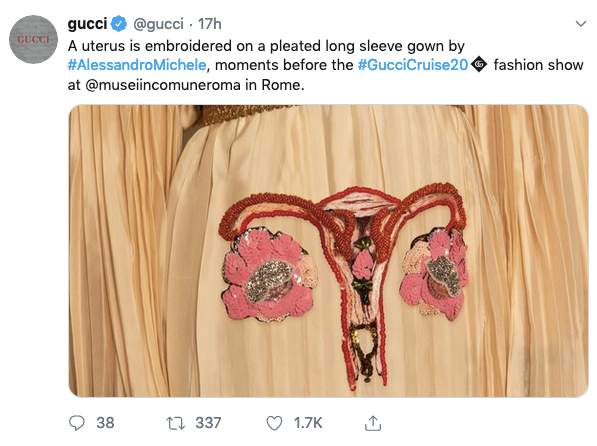 Obviously, an abortion does not wipe out the uterus of a woman, that would be a hysterectomy. But if the uterus is a garden, then yes, abortion rips out the flower (the baby). Unfortunately, abortion is not about flowers and gardens, it's blood and body parts, but that doesn't look so great on a dress - not that these Gucci designs do.

The collection also highlighted the date May 22, 1978, the day abortion was legalized in Italy. The relevant statute does refer to “the social protection of motherhood” but the translation is usually “voluntary termination of pregnancy" not the slightly more palatable euphemism “voluntary interruption of pregnancy” that Gucci’s social media used: 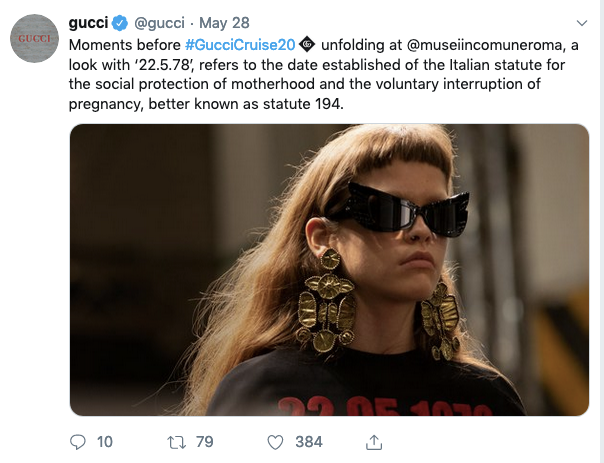 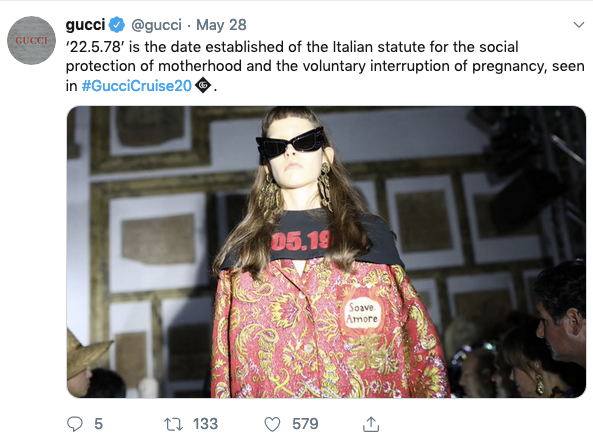 The runway show also featured t-shirts for Gucci’s liberal Chime for Change organization that promotes "reproductive rights" and "the freedom of choice."

The usual social justice warriors in the media raved over the new pro-abortion fashions. Refinery29 declared, “Gucci wants the social media record to reflect that it is now on the right side of history.” Vogue approvingly praised Gucci for “taking a clear stance against reproductive injustice here.” Fashionista claimed, “The threat over reproductive rights in the U.S. is so dire that even Gucci Creative Director Alessandro Michele is chiming in — all the way from Rome.” Meanwhile, Marie Claire praised the pro-abortion message as "bold” and PopSugar dubbed it "very important."

Of course, we didn't hear this kind of acclaim for singer Joy Villa when she wore pro-life dress designs.

Hopefully this latest foray into abortion chic is just a passing fad.