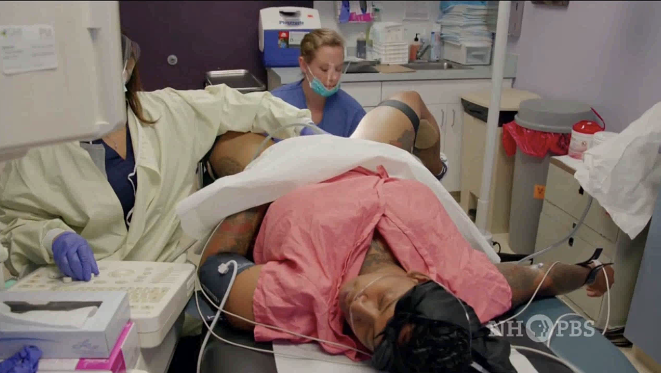 PBS’s FRONTLINE episode “The Abortion Divide,” an update of a piece by Mark Obenhaus that examined abortion politics in Pennsylvania in 1983, aired on April 23. The film bounced back and forth between the 1980s and today, ranging from the inner city of Philadelphia to the suburbs and recording five separate abortion procedures. But one crucial topic was conspicuously missing: the crimes of Dr. Kermit Gosnell.

The most infamous abortionist in the country had a clinic in Philadelphia from 1979 to 2010, and a 2013 trial that found him guilty of multiple murders in the course of his practice. PBS never even mentions him.

There are many opportunities to bring Gosnell up, perhaps none more obvious than during this discussion about abortion regulations in Pennsylvania.

MARK OBENHAUS: In 1982, when the first film was shot, security was light. The waiting room was relaxed and felt like a doctor’s office. The staff wore street clothes. Then, the procedure rooms were spare with a minimum of equipment. The clinic today has the look of a hospital. Anti-abortion groups in Pennsylvania and 23 other states have pressed for the passage of laws that mandate abortion clinics operate as “ambulatory surgical facilities.”

CAROL TRACY, Executive Director, Women’s Law Project: Pennsylvania implemented regulations under the Ambulatory Surgical Facilities Act, that governs everything from the width of hallways, to where sinks are located, to the HVAC systems, to the job descriptions. Abortion care providers have come into compliance with numerous regulations at great cost, at great financial cost to the women who need abortions. And also, it’s limited the number of abortion providers in this state.

JENNIFER BOULANGER, Senior Director, Philadelphia Women’s Center: We had to spend over $500,000 on improvements that did nothing to improve the health of our patients.

Obenhaus wants viewers to believe Pennsylvania in with 23 other states were bullied by “anti-abortion groups” into adopting these laws. That's simply untrue. Pennsylvania's laws were enacted in response to Gosnell by a bipartisan majority in the Pennsylvania state house. But taxpayer-funded PBS has always had a Gosnell blind-spot: in 2012 Anchor Judy Woodruff admitted she was “not familiar with” Gosnell and PBS didn’t cover his 2013 trial for over a month.

One of Tracy’s complaints – regulations about the width of hallways – directly relates to the Gosnell case. The grand jury report, in describing the circumstances that led to the death of Karnamaya Mongar after an abortion, said when emergency personnel arrived at Gosnell’s clinic, “responders had to waste precious more minutes trying to maneuver through the narrow cramped hallways that could not accommodate a stretcher.” In another emergency, “They discovered they could not maneuver stretchers through the building’s narrow hallways to reach the patients (just as emergency personnel had been obstructed from reaching Mrs. Mongar).” And yet abortion clinics still chafe at being held to the same health standards as endoscopy, laser, and plastic surgery centers.

One woman, named Taryn, already has two kids, is “recently single,” and we find out with her during the vaginal ultrasound that she’s aborting twins. After she takes the first pill, Taryn tells the camera:

What I hope I feel is a sense of peace, not only with myself and in the decision that I’ve made, but also a sense of peace with these two beings that I’ve chosen not to bring into the world. Thank you for choosing me, and I’m honored to be given this gift of life. And also, I, I can’t do it right now. I can’t accept that mantle in terms of the other lives that I’m taking care of and I’m responsible for.

Another mother, Shaharra, has four children and has already had one abortion. The episode shows the most of her abortion, including afterward, when we follow the cooler containing the body of her unborn baby (euphemistically called "pregnancy tissue") to a back room where a male technician pieces through the shredded remains to ensure the procedure was complete.

OBENHAUS: Shaharra chose to have a surgical abortion under IV sedation.

MALE NURSE: You might feel a little warm feeling going through your IV site, okay? It’s normal, and it will go away.

OBENHAUS: IV sedation was not an option for the patients at the clinic where the first film was shot.

[Excerpt from 1983 film] Female clinician: Easy does it. Nice and slow; lots of cramps.

OBENHAUS: Patients then were awake, and the procedure was uncomfortable, even painful.

OBENHAUS: Most patients opt to have a surgical procedure. Like Shaharra, they want to leave the clinic with the abortion behind them.

ELIZABETH LIVERIGHT, M.D., Philadelphia Women’s Center: Surgical abortion is incredibly safe. The woman is in stirrups. We do a bimanual exam to feel the positioning of the uterus. I place the speculum, clean off the cervix, and then place a small clip on the top of the cervix to straighten out the uterine canal. The second part of the procedure is dilating the cervix, which is using instruments to gently open the entry into the uterus, and then removing the pregnancy tissue, using suction. It takes somewhere between two and five minutes. Complications are incredibly rare.

REBECCA MERCIER, OB-GYN, Philadelphia Women’s Center: One of the most important components of safety with abortion procedures is making sure all of the pregnancy tissue has been removed from the uterus. The tissue is taken to a special room within the clinic. It is rinsed off. And it’s looked at in a special dish with a little backlight on it that lets us confirm that we are seeing all the tissue that would be expected for the gestational age for the pregnancy. And that lets us know that there weren’t any complications.

OBENHAUS: The gestational age of this fetus was nine weeks and one day.

MERCIER: Up to nine to ten weeks, it’s just a small little piece of translucent sac tissue, with nothing that looks recognizable as any kind of fetal parts. After that, you do see small bits of tissue that are recognizable as fetal tissue.

Also of note, PWC abortionist Lisa Perriera, who the documentary notes is featured on Operation Rescue’s website (but they don’t reveal it's because of her history of botched abortions leading to at least one patient death), calls infamous late-term abortionist Dr. George Tiller, who was murdered in 2009, “one of the idols in our community.”

But, again, no word on what they think of Gosnell.